Since the end of 2018, anti-government protests have been held across Serbia. Maja Bjeloš explains the background to the protests, which have demanded an end to government pressure on the media, stronger protection for journalists and political opponents against violence, investigations into alleged political killings, and electoral reforms.

The President of Serbia and the country’s ruling Progressive Party (SNS), Aleksandar Vučić, is currently facing his biggest legitimacy crisis since coming to power in 2012. An attack on the leader of the opposition Serbian Left party, Borko Stefanović, by masked men at an opposition rally in the central Serbian city of Kruševac triggered the protests in late 2018. Following the incident, thousands of protesters have marched through the streets of Belgrade to voice opposition against political violence.

However, the protests reflect dissatisfaction with the current regime that goes far beyond the single issue of political violence. The roots for this dissatisfaction lie in broader concerns over Vučić and his party eroding political rights and civil liberties, putting pressure on independent media outlets, the judiciary and the opposition, while also suffocating civil society organisations. Many of these concerns are apparent in international rankings, such as the Freedom House index. The personalisation of governance and politicisation of state institutions, as well as Serbia’s economic situation, have further exacerbated the situation. 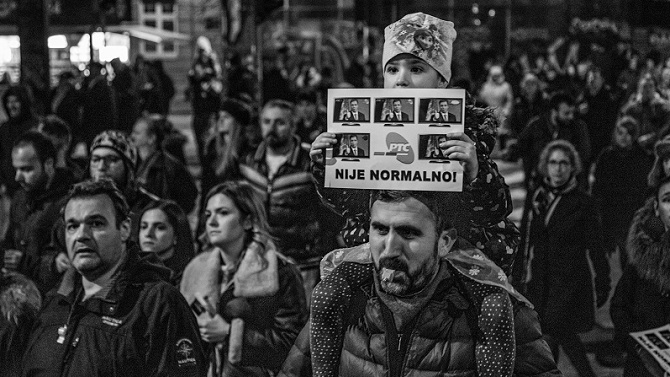 Image from one of the protests in Belgrade. Credits: Tanja Bažalac

Most citizens are unable to express their dissatisfaction through established institutional channels. In response, on every Saturday for the last ten weeks, they have taken to the streets to protest against Vučić’s regime in the capital and in towns across the country. They have now swelled across 50 Serbian cities – the largest rallies taking place in Belgrade, Novi Sad, Niš and Kragujevac, with tens of thousands of Serbian citizens attending the demonstrations. They have brought together people from different social classes and united leftists and far-right nationalists.

The core demands are for free and fair elections, media freedom, professional and fair reporting of the protests by the Serbian public broadcaster (RTS), a broader space for opposition voices on TV channels with national coverage and an end to violence in Serbian society. The organisers of the protests have made several additional demands including the dismissal of Interior Minister Nebojša Stefanović; a thorough investigation into who was behind Borko Stefanović’s assault and the murder of Oliver Ivanović, a prominent Kosovo Serb politician; an investigation into an attack on the journalist Milan Jovanović; and for Vučić to reveal a plan to resolve the Kosovo issue.

The response from Vučić has been a cautious one. So far, the Serbian government has refrained from engaging in repressive measures against the demonstrators. On the contrary, Vučić has opted to either ignore the protests completely or minimise their significance, hoping that the demonstrations will slowly fade away. He claimed he would not fulfil any demands even if there were “five million people in the streets,” and he challenged the opposition by calling for early elections in the spring. In response to his statement, protesters have adopted the slogan “one of five million”.

The protests are organised by a loose coalition of opposition parties and the students’ group “Protest Against Dictatorship”, which organised earlier mass protests after Vučić’s inauguration as President in April 2017. Due to the involvement of opposition parties, Vučić has portrayed the protests as an attempt to bring down the government. He has also accused the movement of being on the payroll of tycoons as some opposition leaders, who are taking part in the protests, are providing logistical assistance to the organisers. Despite this, the organisers insist on non-party affiliation. None of the tactics used so far to discourage participation, such as the creation of videos mocking the protests or the use of technology to identify the individuals involved, appear to have worked. 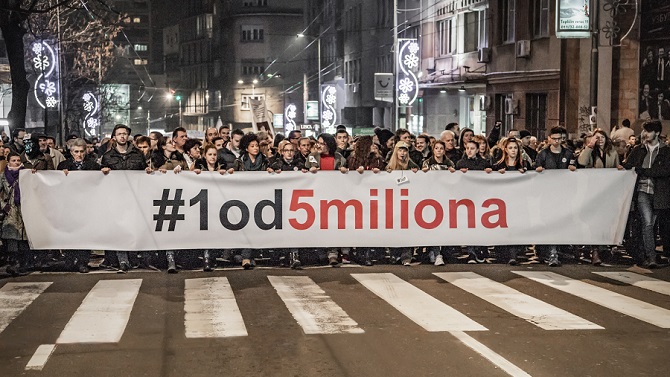 Russian President Vladimir Putin’s visit to Belgrade on 17 January has been viewed as an attempt to provide personal support to Vučić and his government. It provided an opportunity for Vučić to marginalise dissatisfied citizens and present himself as a politician who enjoys both domestic and political support. But there is no such thing as a free lunch in world politics, and the visit left some citizens wondering what the price paid for Putin’s backing may be in the long run.

In an open letter they emphasised that they are obliged to raise their voice “in the belief that the citizens of Serbia deserve better than what this government offers to them… in the name of the profession and moral obligation to students to cultivate free thinking, freedom of expression, the right to truthful information, the culture of dialogue, to advocate for the rule of law – all of which implies believing in fundamental civilisation values ​​and respect for diversity.” Meanwhile, members of the police, military unions, and lawyers from several cities have also supported the protests, calling on President Vučić and Prime Minister Ana Brnabić to resign. 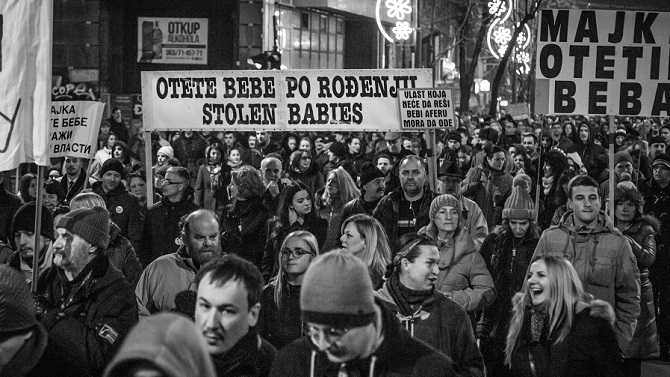 Institutional support of this kind presents a more worrying problem for Vučić, potentially leading to a less cautious response than he pursued in the early weeks of the protests. However, attempts by the opposition to capitalise on the government’s failures have been far from effective. The organisers of the protests have managed to provide a vehicle for citizens to express their dissatisfaction, but there is currently a lack of strong leadership. The informal organisers are unable to bring about political change on their own, while opposition parties are incapable of turning civil society’s dissatisfaction into a real policy response.

Many participants therefore remain uncertain about the possible outcome of the protests. There is unity in opposing the government, but there are many dissenting voices among opposition leaders over the movement’s ultimate aims. Grasping this potential danger, organisers called on opposition leaders to agree on a roadmap for creating a more democratic society and liberal political system. The Alliance for Serbia, a coalition of nine opposition parties taking part in the protests, has proposed that there should be a transitional expert government for a limited period of one year during which free and fair elections can be organised. Although supported by other opposition movements and initiatives, this proposal is still far from workable as it stands.

There has been a general lack of support for the protests from other western democracies, who are presently preoccupied with their own problems. Many western diplomats perceive Vučić to be a peacemaker and guarantor of stability in the region. They hope that Serbia will limit Russia’s influence by reaching a final deal with Kosovo under the auspices of the EU, while also tempering efforts by Milorad Dodik, the Serb member of Bosnia and Herzegovina’s tripartite presidency, to push for the Republika Srpska’s independence. 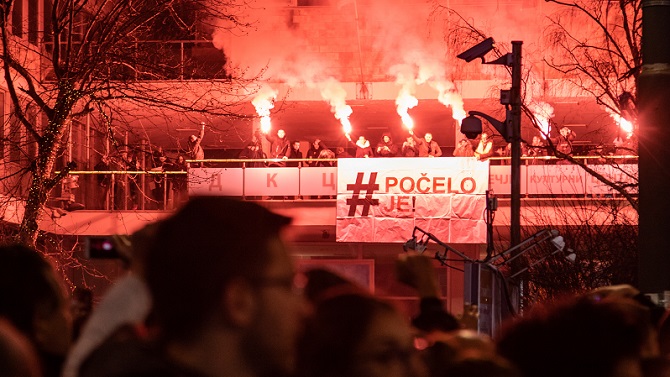 This was underlined by Vučić being given a platform to speak about media freedom at the World Economic Forum in Davos in January, despite the concerns raised by the protesters in Serbia about this very issue and the various domestic and international reports that indicate Serbia is becoming a more difficult country for journalists to work in. Some observers have claimed that against this backdrop, “the EU’s continued elevation of Vučić as a credible champion of European values is becoming increasingly untenable”.

Whether or not the demonstrations will continue to grow and become a significant political movement depends on the capacity of the opposition to provide a credible alternative to Vučić. But it will also depend on international support for Vučić’s regime: in Serbia, external legitimacy is what matters.

Maja Bjeloš – Prague Security Studies Institute
Maja Bjeloš is a Belgrade-based research associate of the Prague Security Studies Institute focusing on non-EU foreign power influence in Serbia. She has also researched security sector reform in Serbia for the Belgrade Centre for Security Policy, focusing on women, peace and security, EU integration and the implementation of the Brussels Agreement in Kosovo and Serbia.