European Parliament (EP) elections offer electoral advantages to the radical right as the issue of European integration is particularly salient in EP election campaigns. Anti-European stances serve the substantive demands that populist radical right actors advance as part of their ideological and programmatic core. Together with other nationalist and anti-immigration proposals, they form a coherent set of culturally conservative policy demands.

Issues of supranational integration are debated in close connection to other issues pertaining to cultural or identitarian politics, notably the issue of immigration, the ‘twin issue’ of European integration. Conflicts over these issues form an increasingly relevant dimension of party competition across Europe. Processes of economic, political and cultural globalisation have contributed to the opening up of national boundaries, which has affected citizens’ lives and living conditions across Europe in different ways.

A number of scholars argue that related political debates tend to occur along a ‘new’, cultural dimension of political conflict that is distinct from the traditional left-right dimension of politics and cuts across left-right ideological loyalties. The issue of European integration is to be situated as one of the political issues that pertains to the new cleavage. It aligns with other culturally conservative proposals and the populist radical right’s substantive demands. During the EP election campaign, these issues were highly salient and the radical right clearly benefits from this increased salience of their core programmatic demands.

The complex and technocratic character of multi-level governance 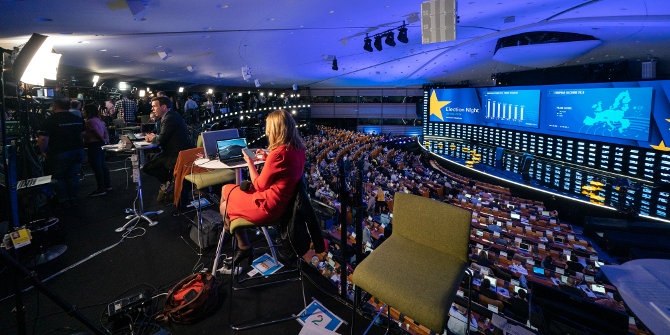 European politics and European policy-making have a history of creating perceptions of abstract remoteness among citizens. In the early phases of European integration, the often complex decisions taken at the European level hardly touched upon citizens’ everyday lives in a visible, perceptible way. This has changed at least in the wake of the debates over the single currency. Multi-level governance in the EU, however, has largely maintained its technocratic character and the policy process often leads to procedural agreement among the EU’s members, which is at odds with the style of policy-making envisioned by the populist right.

The recent experience of the financial crisis across Europe has only entrenched this perception of elitist, technocratic EU decision-making. This has offered a discursive opportunity for populist radical right actors, who appeal to voters by promoting an anti-elitist style of decision-making that aims to give control back to citizens and the nation state.

Last, radical right parties enjoy advantages in EP elections because of the institutional set-up of these elections. While the decision-making authority of the European Parliament has grown over recent decades, there is no government formation at stake in the elections. As such, voters are more likely to ‘vote with their heart’ and cast a vote that closely matches their policy preferences, disregarding any strategic calculations over whether their chosen party will be part of a government.

Other voters use the supranational elections instrumentally to express dissatisfaction with their national governments. The electoral system applied in the EP elections further increases incentives to vote non-strategically. As of 1999, all member states have to apply a system of proportional representation in the elections, rendering the contest more permissive than in some countries’ national elections in which the electoral formula contains majoritarian elements.

One final question is whether the success of radical right parties in European elections helps these parties to grow their support in subsequent national elections. In a recently published study, I show that EP elections do indeed foster the rise of the radical right at the national level.

Thanks to European Parliament elections, radical right parties are therefore becoming more visible in the national discourse of member states: the media is covering their success, voters are becoming more aware of their platforms, and mainstream parties are starting to treat them as more serious competitors. This might set in motion a different political dynamic not only in changing the way mainstream parties react, but also in changing the way voters perceive of the electoral viability of these challenger parties and the social acceptance of their radical policy positions.