Croatia will hold a presidential election on 22 December, with a second round of voting set for 5 January if no candidate wins a majority. Tena Prelec previews the contest and assesses what the result might mean for the country’s next parliamentary election, due to be held in 2020.

In spite of 11 candidates gracing the stage of the one and only pre-election TV debate, Croatia’s presidential election projects to be a three-horse race between incumbent President Kolinda Grabar-Kitarović, former Prime Minister Zoran Milanović, and musician-turned-politician Miroslav Škoro. The race is exceptionally tight and the first round of voting on 22 December could well turn out to be more important than the second. If Škoro manages to finish in the top two and progress to the run-off on 5 January, the polling suggests he could become President.

At present, this scenario looks unlikely, with Grabar-Kitarović and Milanović holding an edge in the polling for the first round, but if it did occur, it would upend the equilibria within the ruling Croatian Democratic Union (HDZ). Croatia’s Prime Minister, Andrej Plenković, would clearly prefer Grabar-Kitarović, who has been endorsed by the HDZ, to be reelected. But a Škoro presidency emboldening the far-right might be even more damaging for Plenković than a Milanović presidency.

Milanović, who represents the Social Democratic Party of Croatia (SDP), has learned from previous mistakes. He knows that his fiery demeanour is a potential weakness – his perceived arrogance as SDP leader was cited as a major factor in the party’s defeat at the last parliamentary election in 2016, which brought Plenković into power. He has addressed this in his campaign slogan (A President with character) and is currently steering clear of outright attacks on the other candidates. So far, this strategy has been working, as his approval rate has been gradually picking up in the polls. 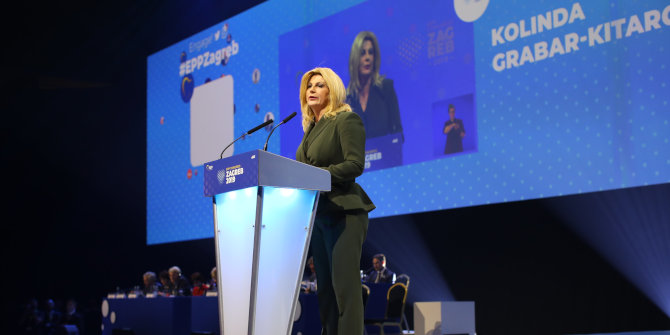 Grabar Kitarović, in contrast, has cut a nervous figure during the campaign. Although she remains the favourite to win, she has been notably defensive and has made a series of rather extraordinary blunders. She does not perform well under pressure and her team knows it – this is clear from the fact she chose to avoid a direct confrontation in a TV debate with the other three leading candidates (Milanović, Škoro and the former judge-turned MEP Mislav Kolakušić).

She has spent much of the campaign locked in a contest with Škoro for the backing of voters located on the far right of the policy spectrum. She chose to appeal to supporters of the controversial Mayor of Zagreb, Milan Bandić, who is facing corruption charges, by stating she would “bring cakes to him should he end up in jail”. She has also appealed to those who support Croatian irredentism in Bosnia and Herzegovina, notably with her statement that Croatia goes “from Vis to Kupres” – an attempt to draw votes from the traditionally right-wing Croatian citizens located in Herzegovina. Škoro has gone even further, indicating that he would pardon war criminal Tomislav Merčep: a general under whose command 43 civilians – most of them of Serbian ethnicity – were killed in 1991.

The picture is made all the more dispiriting when one considers that several of the ‘minor’ candidates (including: former president of the Conflict of Interest Commission Dalija Orešković, Workers’ Front candidate Katarina Peović, Croatian Social Liberal Party candidate Dejan Kovač, and the above-mentioned Mislav Kolakušić), who are attracting a fraction of the support of the top three, have done a far better job of addressing the real issues that are presently confronting Croatia, chiefly corruption, emigration, a lack of meritocracy and the politicisation of key institutions (including the public broadcaster). These are recognised as being fundamental issues among the public in Croatia, but they have not translated into votes, with clientelism and traditional ideological appeals still holding great sway over the electorate. All of this has been magnificently illustrated through the rhetoric of the spoof candidate in the field, Dario Juričan, who has drawn wide acclaim for his send up of Croatian politics.

Following the presidential election, attention will quickly turn to Croatia’s next parliamentary election, which will be held during 2020. As things stand, it is unlikely the HDZ will be removed from power. Citizens are generally unhappy with the way their country is being ruled, but when push comes to shove, clientelism and ideological appeals tend to prevail over the will to vote for fresh faces.

The HDZ is well placed to capitalise in both respects. They also possess a large electoral machinery, which ensures that they do not lose too much to far right parties during parliamentary elections. The current governing majority is fairly slim, and this may well remain the case following next year’s election, but for the moment, the prospects of a government being formed without the HDZ seem remote.

A grand coalition with the SDP would be unlikely, although it cannot be completely discounted as a possibility. The centre-left is highly fragmented and their traditional support base has been eroded through mass emigration. Furthermore, after a period of soul searching during recent years, the SDP seems to have re-emerged as the only realistic option for voters on this side of the policy spectrum, as minor parties struggled to build a more considerable voter base at the European Parliament elections in May 2019. When it comes to government formation, much will depend on the individuals at the helm of the two mainstream parties. The option of establishing a grand coalition would not be taken lightly as it could mean a significant loss of support for both parties.

A likelier outcome is that we will have another variant of ‘business as usual’, with minor parties, and especially Milan Bandić, still holding the key to the survival of the government. If Bandić (currently, yet again, under investigation for corruption) were to end up in prison, this would leave this scenario up in the air – and indeed, this will be one of the events to watch out for as we move into 2020.

Note: This article gives the views of the author, not the position of EUROPP – European Politics and Policy or the London School of Economics. Featured image credits (clockwise from top-left) European People’s Party (CC BY 2.0); Mateo K 01 (CC BY-SA 4.0); © European Union 2013 – European Parliament (CC BY 2.0); SDP Hrvatske (CC BY 2.0)