Policymakers and scholars of the European Union have been increasingly more concerned about democratic backsliding in member countries where the EU no longer possesses the ‘membership’ carrot for continued reforms. But is the EU really hopeless when it comes to helping members safeguard and promote good governance? Mert Kartal presents findings from a recent study which suggest that the EU can make a difference by convincing and/or empowering opposition parties in member countries to uphold good governance.

In the aftermath of the Cold War, the EU’s efforts to democratise post-communist countries in Central and Eastern Europe have attracted considerable attention. Among a few alternatives, membership conditionality has been the most popular explanation for the successful reforms many EU-applicant countries in the region achieved in the late 1990s and early 2000s. More specifically, it has been argued that the EU helped promote good governance in these countries because it was able to grant them membership in return for reforms.

This incentive-based conditionality argument has also been used to shed light on the substantial policy reversals (e.g., in corruption control or in minority protection) that several members have suffered from since the mid-2000s. More specifically, scholars have long argued that because the credible membership incentive ceased to exist after accession, national governments (at least in some member countries like Bulgaria and Romania) moved away from prioritising EU-induced policies and subsequently abandoned governance reforms.

Obviously, the mere possibility of such illiberal tendencies in itself is bad news. Besides, it implies that the EU hardly possesses any effective tool to prevent policy reversals in member countries. What is even more troubling is that, as we have recently found out, backsliding in good governance has not been limited to only a few countries in Central and Eastern Europe; instead, there seems to be an alarming trend in most new members of the EU.

In a recent study, I found that although EU-member countries in Central and Eastern Europe in general have suffered from policy reversals in corruption control, there has been no such deterioration regarding ethnic minority rights. While increasing corruption is certainly concerning, my findings in the case of minority protection suggest a rather optimistic scenario: It may actually be possible for the EU to help member countries uphold good governance even in the post-accession period. To account for this possibility, we need to understand what the EU has been missing in the case of corruption control but not in minority protection.

Accordingly, I analysed the conditions under which the EU promotes good governance in its applicant and member countries in Central and Eastern Europe. My analyses suggested that the EU’s ability to ‘recruit’ opposition parties in national legislatures to prioritise good governance in their agendas is key to understanding the trajectory of governance reforms in the region. I found that such political leverage of the EU over member countries serves as a better predictor of country performance than any other alternative including membership conditionality.

In the 1990s, there was high public support for the EU in many Central and Eastern European countries. This was mostly because the public believed that EU membership would grant them a higher standard of living. However, EU membership was an exclusive perk for which any interested country would have to implement a set of requirements. Moreover, executing governance reforms (e.g., anti-corruption, non-discrimination) in line with the EU’s demands was considerably costly for governments in most post-communist countries due to their economic, political, and cultural legacies from the Soviet years.

Importantly, when a government in an EU-candidate country failed to implement these reforms, it was publicly criticised by the EU. Such criticism coming from an external actor that was popular among the public had a few serious consequences. First, it hurt government parties’ reputation among voters and, hence, jeopardised their prospects for re-election. Second, it provided opposition parties with an opportunity to maximise their vote share by moving closer to policy preferences promoted by the EU, which in return pressured government parties for governance reforms.

In various analyses, I found such ability of the EU to recruit opposition parties to be the only meaningful predictor of the positive change the EU-candidate countries in Central and Eastern Europe achieved in corruption control. This was the case even when membership conditionality was controlled for. Following accession, however, public support for the EU decreased substantively, and hence, opposition parties dropped their pro-EU rhetoric. This significantly reduced the EU’s political leverage over governments and subsequently deteriorated their anti-corruption performance.

It is important to note that, unlike membership conditionality, the aforementioned political leverage argument does not limit the EU’s ability to influence domestic politics to pre-accession years only. Instead, as long as it provides opposition parties with electoral incentives/opportunities, the EU should be able to maintain its political leverage even in member countries.

These findings have several important implications. First, there is now systematic evidence suggesting that most EU-member countries in Central and Eastern Europe have experienced policy reversals with respect to corruption control since the mid-2000s. Second, the EU’s membership incentive has not been able to promote sustainable governance reforms in the region. However, the EU may still be able to encourage good governance both in applicant and in member countries by collaborating with opposition parties in national legislatures. One way for the EU to lure opposition parties into collaboration is to increase its own popularity among the electorate. The more popular the EU is, the more electoral incentives it is able to offer to political parties in opposition to maximise their vote share. The more opposition parties adopt EU-induced policy preferences, the more effectively the EU pushes governments for continued reforms.

Note: This article gives the views of the author, not the position of EUROPP – European Politics and Policy or the London School of Economics. Featured image credit: Sebastian Indra / MSZ (CC BY-NC 2.0) 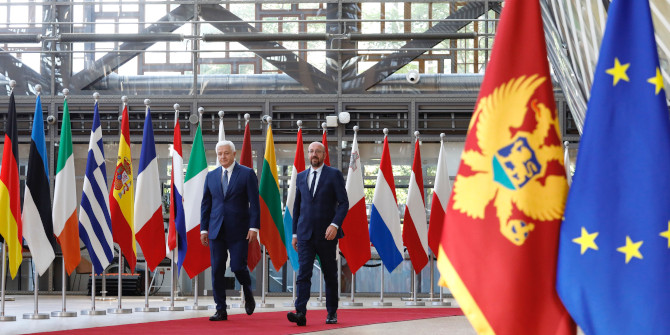