The left-right divide remains a powerful indicator of voting behaviour

The left-right divide remains a powerful indicator of voting behaviour

The increasing salience of issues such as immigration and the environment has altered the nature of party competition in Europe. But do these changes mean that left-right ideologies are no longer a powerful indicator of the choices voters make at the ballot box? Drawing on data from Israel, Odelia Oshri, Omer Yair and Leonie Huddy show that in the absence of partisan attachment, a left-right identity continues to provide an anchor for voters’ political decision-making.

Democratic political systems have shown growing volatility in recent years. Loyalty to traditional parties is eroding in many democracies, as partisanship declines, and support for alternative parties increases. New issues, such as immigration and the environment, have altered the nature of party competition, weakening alignment along formerly powerful left-right economic and socio-cultural axes.

It might be tempting to conclude that left-right ideology is no longer a powerful guide to voters’ political behaviour. Perhaps voters rely more on non-ideological indicators such as the charismatic nature of party leaders or the anti-establishment stance of a newly emergent party than ideology or partisanship.

However, in a recent study, we show that in the absence of strong partisanship, a strong left-right identity plays a powerful role in driving political decision-making. Even in volatile electoral systems, a left-right identity systematically affects vote choice, structures democratic politics, and clarifies social and political divisions.

Our research is part of a burgeoning literature demonstrating that emotional and psychological attachments to an ideological group, an “ideological identity,” helps to shape political behaviour and vote choice. Thus far, the influence of left-right identity has been demonstrated mostly in the American two-party system. No study of European multi-party systems has specifically examined the existence and ramifications of ideological identities.

Our research demonstrates that, in Israel – a highly fragmented and volatile multi-party system – attachment to an ideological group is strongly tied to vote choice and political engagement, and its effects are independent of, and at times more powerful than, ideology understood as issue-positions and policy preferences.

In our research, we expected voters with a strong left-right attachment to display another form of loyal group behaviour: defensive or positive emotions in reaction to a threat or reassurance, respectively, to their group’s status and electoral success. Emotions in general, and anger and enthusiasm specifically, are known to propel political action and are therefore strong predictors of political participation.

We thus anticipated that voters with strong emotional and psychological attachment to an ideological group will display defensive emotions when they encounter information that threatens the status of their left or right group. Such information is seen as undermining the status of members who identify with an ideological group and therefore serves as a call to rally in its defence.

To test our hypothesis, we implemented two vignette experiments (in Study 1 we surveyed 617 Jewish Israelis, while in Study 2 we surveyed 703 Jewish Israelis; the samples were not representative of the Jewish Israeli population, but were diverse on many socio-demographic and political variables). In each experiment, respondents read a mock news article that either presented a threat or reassurance to the status of their respective ideological group (by suggesting that their ideological bloc would win or lose an upcoming election).

The purpose of this manipulation was to examine whether a left-right identity conditions an emotional reaction to group-relevant information, irrespective of one’s policy preferences. Winning or losing in the elections of course also presents a potential threat or reassurance for one’s policy preferences, which could be implemented (or not implemented) following an electoral victory (defeat) of one’s ideological bloc; and in our case, our manipulations also allowed us to test whether Israelis’ issue positions on the Israeli-Palestinian conflict condition their emotional reactions to the vignettes, irrespective of their left-right identity.

As expected, in both experiments we found that those who most identified with their ideological group felt most negative when their group’s status was threated and felt most positive when reassured (see left-hand panels in Figure 1 below, which shows results from our Study 1 experiment). But issue positions on the Israeli-Palestinian conflict do not condition one’s emotional reactions to the vignettes (see right-hand panels in Figure 1 below). Our findings shed light on the underpinnings of voters’ ideological loyalty and attendant actions to protect and strengthen the status of their respective ideological camps, even at the expense of supporting their camp’s policy positions. 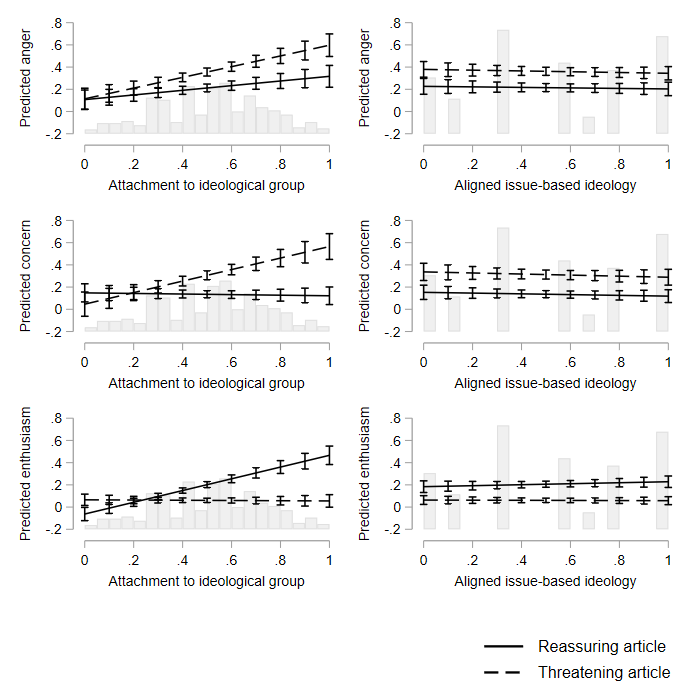 To return to our original question, voters’ ideological identities can mitigate the impact of partisan instability and foster closer alignment between citizens and policymakers. Even as the electoral fortunes of individual parties rise and fall, the share of votes allocated to an ideological bloc can remain stable.

Group attachments also enhance political representation. Although the importance of party identiﬁcation to vote choice has declined in some settings in recent years, the link between citizens and elected politicians in parliamentary systems is nonetheless largely sustained by citizens’ attachment to an ideological bloc. Parties can therefore gain popular support by belonging to a major left-right bloc. This will work best in multi-party political systems dominated by a strong left-right axis.

Note: This article gives the views of the authors, not the position of EUROPP – European Politics and Policy or the London School of Economics. Featured image credit: Mika Baumeister on Unsplash

Odelia Oshri is an Assistant Professor in the Political Science Department at the Hebrew University of Jerusalem. She studies comparative political behaviour in advanced democracies, public opinion, political representation and gender and politics. In her current work she examines failures in representation linked to changes in mainstream party platform and causes and consequences of radical right populism.

Omer Yair is a Research Associate and Coordinator at the Institute for Liberty and Responsibility at the Lauder School of Government, Diplomacy and Strategy at Reichman University. He studies public opinion and political behaviour and focuses on partisans’ attitudes toward their political rivals and toward public institutions and the media.

Leonie Huddy is a Professor and Chair in the Department of Political Science at Stony Brook University. She studies political behaviour in the United States and elsewhere through the lens of intergroup relations, with a special focus on gender, race, and ethnic relations. Her recent work extends that focus to the study of partisan identities in the United States and Western Europe.