In The Pound and the Fury: Why Anger and Confusion Reign in an Economy Paralysed by Myth, Jack Mosse explores everyday understandings and myths surrounding the workings of ‘the economy’ in the UK, showing how it is not a fixed and definable object but a malleable social sign that means different things in different contexts. This fascinating study offers a snapshot of the lived experience of late capitalism, shining particularly when it suggests the need to begin talking and listening to one another, writes Jessica Eastland-Underwood.

The Pound and the Fury: Why Anger and Confusion Reign in an Economy Paralysed by Myth. Jack Mosse. Manchester University Press. 2021. 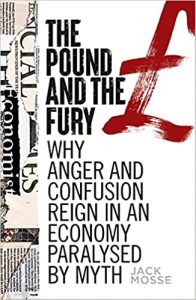 As society still struggles with how to weigh the needs of the economy against the threat of death in the context of the COVID-19 pandemic, The Pound and the Fury prompts us to ask: what is this thing, the economy? In his new book, Jack Mosse joins a flourishing branch of research interested in ‘the economy’, not as a definable object in the field of economics, but as a malleable social sign that means many things in different contexts. To demonstrate this, he interviews dozens of Londoners from various social strata about their economic beliefs. The results are fascinating.

The first definition of the economy is from single mother Tracy, who says it’s ‘rich, white men’ who decide ‘what goes where’ (10). Financial journalist Andrew says it is a ‘beast we are incapable of understanding’ (5). Finally, and very precisely, economist Thomas defines it as ‘the process and mechanisms that we use [to] re-distribute and incentivise’ (5). The snippets from Mosse’s interviews scattered throughout the book are immersive and engaging, making the reader feel part of a conversation. ‘Yes, Thomas,’ I shout back to the book as I read, ‘that’s very accurate, but what does that mean?’

Similar to Anna Killick’s ethnographically inspired research on Brexit England, Mosse interviews ‘everyday’ Britons about the economy. These interviews lead him to conclude that there is a common myth about the economy as a fixed set of resources or, in Mosse’s words, a ‘pot of money’. This pot of money, according to these everyday interviewees, has been overstretched due to lazy youths and mooching immigrants. In economics, this is called the ‘Fixed Pie’ fallacy, which I teach to my undergraduate students. It is the mistaken belief epitomised in the words of out-of-work labourer, Mic, who claims that ‘muppets [immigrants]’ taking jobs means fewer jobs for British workers (23). Such erroneous (and ultimately cruel) beliefs within the public have been observed elsewhere. However, Mosse has cleverly set these statements next to the erratic ‘logic’ of the so-called elite, lest anyone begin to feel smug.

Alex, a retired financier, asserts the importance of his work ‘facilitating the flow of money’ (52) with one breath, while conceding ‘it was all luck’ (45) in another. Andrew, the civil servant, confesses that ‘the evidence that comes to the surface fits the policy, not the other way around’ (68). The co-founder of a financial magazine boasts of the role of opinion in making their business profitable. ‘You can get things wrong’, they admit, ‘but if you take a pretty strong view, people like that’ (97). Instead of expertise and objectivity, Mosse’s interviews expose more happenstance and posturing. Tracy’s description of the economy as ‘rich, white men’ deciding how resources are distributed seems less conspiratorial the more policymakers, journalists and financiers that Mosse quotes.

I read Mosse’s book at the same time as I read Frederick Douglass’s My Bondage and My Freedom. I observed a parallel between the elite narratives from Mosse’s interviews and Douglass’s description of his former slave-owner, Mrs. Auld. Having little knowledge of slave-owning herself, Mrs. Auld began teaching Douglass – a child at the time – how to read. Her husband had to teach her that literacy undermined the slave system. This logic was not intuitive for her. However, she came to not only accept, but also to perpetuate her husband’s ideology. It was necessary to maintain her social position. In a similar way, Mosse’s elite interviewees suppress their own conscience to justify their elevated social position.

This is exemplified by physics PhD-turned-hedge fund analyst, David, who describes his industry (in his own words!) as ‘a blueprint for exploiting people’ (144). From Alex’s acknowledgement of luck and Andrew’s admission of evidence-fixing, there is no strict logic to finance or economics. However, to challenge the system might be to admit that the prestige and privilege that they receive from their social position are not warranted. It might mean that the luxurious life that they enjoy does not come from the intrinsic value of their work, but from the gross injustice that their work sustains.

In the penultimate chapter, Mosse admirably turns his attention to a solution: Modern Monetary Theory (MMT). Put simply, this is the theory that governments can effectively print and spend as much money as they like. While the private financial system undervalues the reproductive labour of single mothers like Tracy, MMT would allow the British state to put money in Tracy’s pocket.

However, there is an unspoken shadow behind Mosse’s book: nationalism. Perhaps MMT could benefit the British working class. But would Tracy discipline her political representatives to be as generous with the people of Argentina or Syria, when even now she grumbles about ‘foreign people’ being given ‘this that and the other’ (11)? Or in possession of a more luxurious life, would Mic be like Alex and Andrew? Believing he deserved this life, but in this case, on the basis of the superiority of being born British?

I am less convinced by Mosse’s central claim that ‘the pot of money’ myth is the principal error uncovered in his research. I do think he is right to look at money. But to me, his interviews point to a culture united in surrender to the belief that money is the right method to measure value. Banking Director Matthew points out that ‘3% of people in this country pay for the other 97%’ (53). Of course, he does not mean that 3% do the work, but rather 3% produce the money. Matthew inadvertently exposes the injustice: if this 3% don’t do all the labour that sustains the community, why is it that they control nearly all of the social tool we use to assign value?

Maybe Thomas’s ‘process and mechanisms’ definition of the economy is right. Only, we’ve come to believe our economy is money. But isn’t money a terribly inadequate tool for fair re-distribution and incentivisation? I’m not persuaded, given the evidence from Mosse’s book, that more money is the solution.

For me, The Pound and The Fury works best as a snapshot of the lived experience of late capitalism. The disillusionment is visceral. Sympathy for the working-class interviewees is often quickly overpowered by revulsion at the voicing of xenophobic tropes. Something akin to pity might be experienced when reading the self-loathing these ‘elite’ interviewees express when discussing their life’s work. When confronted by the contradiction between their personal values and their writing, one financial journalist offers a resigned justification: ‘You need a paid job at the end of the day’ (99). Mosse’s diverse collection of interviewees all seem to agree the system is broken, but also apparently agree that there is nothing to be done about it.

COVID-19 has been a test of our determination to prioritise life over this abstraction of ‘the economy’. It will not be the last test of such determination. Perhaps in the future, Mosse’s book will be analysed as historical evidence of the narratives that allowed a villainous system to persist. Or perhaps it will be amongst the detritus of human civilisation extinguished by climate catastrophe. To avoid the grim reality of the latter future is to take seriously, as Mosse has attempted in this work, efforts to manifest the former. The Pound and the Fury shines when it quietly suggests that our way out of this culture of money ought to begin with talking and listening to one another.

Note: This article first appeared at our sister site, LSE Review of Books. It gives the views of the author, not the position of EUROPP – European Politics and Policy or the London School of Economics. Featured image credit: Michael Brasuela from Pixabay

Jessica Eastland-Underwood is a PhD candidate in the Politics and International Studies department at University of Warwick and a Graduate Teaching Assistant in the Political Economy department at King’s College London. Her PhD project is examining everyday conceptions of ‘the economy’ in the United States during the COVID-19 pandemic.