On 29 January, Sergio Mattarella was re-elected as Italian President. Marina Cino Pagliarello and Davide Tedesco write that Mattarella’s re-election could act as a catalyst for Italy’s two largest populist parties – the League and the Five Star Movement – to pursue a more moderate course.

Last month, following a messy, complex, and fascinating process characterised by several theatrical events, the Italian Parliament elected its President of the Republic for another seven-year mandate. In the 8th election round, the incumbent Sergio Mattarella was re-elected with a total of 759 votes, thus reaching the required threshold of 505 votes.

The election was particularly interesting due to its implications for the two largest populist parties in Italy, the League and the Five Star Movement. The vote marked a moment of moderation for both parties. The election and the confirmation of Mario Draghi’s continuation as Italian Prime Minister also opens up a potential window of opportunity for widening their electorate.

Lega and the Five Star Movement: Bringing the centre back in?

For both parties, Mattarella’s re-election has opened up a Pandora’s Box, triggering the collapse of old coalitions and the emergence of new ones. First, the centre right seems to have been dissolved, with Lega and the Brothers of Italy (Fratelli d’Italia – FdI) pursuing different political paths. While Giorgia Meloni, the leader of the Fdl, is now attempting to form a new coalition, Matteo Salvini, the leader of the League, is navigating through a serious political storm.

Salvini has proven unable to take advantage of the momentum previously generated by his party. At its peak, the League won 34.3 per cent of support during the 2019 European Parliament elections and regularly polled around this level of support in opinion polls. Current polling suggests the party would only be able to secure around 17.2 per cent of support – similar to its result in the last Italian general election in 2018, but a dramatic drop from its previous polling position. 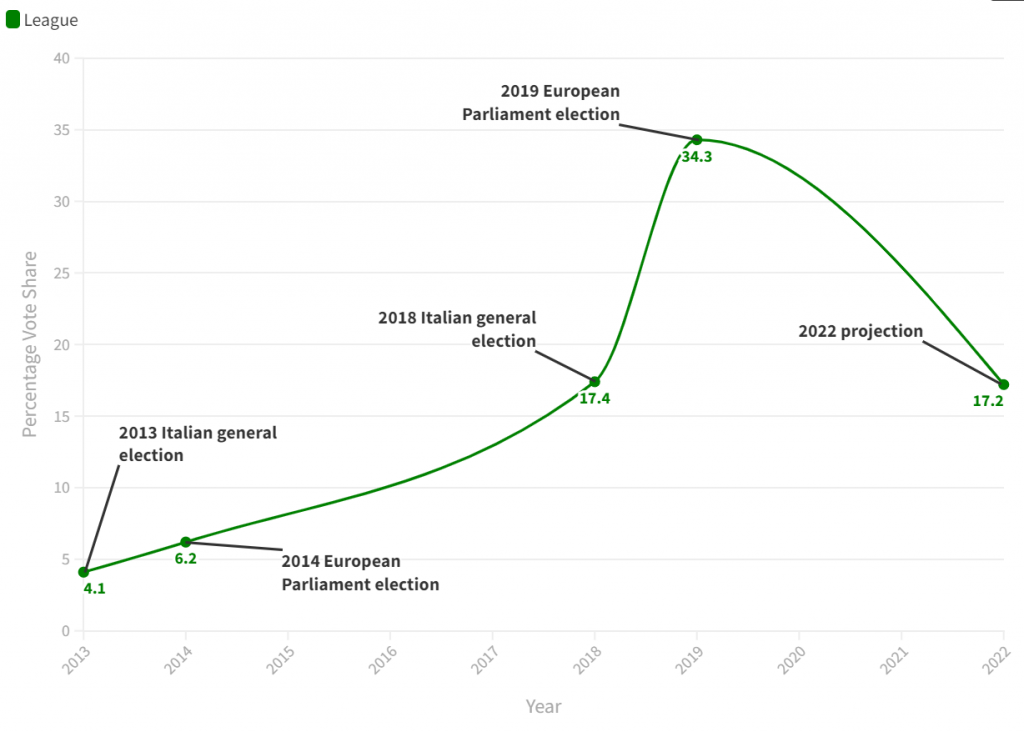 Salvini’s leadership (or lack thereof) has undoubtedly played a significant role in this decrease in support. During his appointment as Minister of the Interior (2018-19), Salvini repeatedly voiced populist and anti-immigrant viewpoints. However, these overtures to the far-right were not entirely attuned to a significant part of his electorate, namely the businesses in northern Italy who had been severely affected by the economic crises that have hit the country over the last two decades. This section of his electorate is also characterised by holding more Europhile stances.

Salvini’s waning support within the party has been exploited by Giancarlo Giorgetti, currently serving as Minister of Economic Development, who is slowly pulling the plug on his leadership. Giorgetti can count on the backing of several high-level party members and politicians, including the governors of Friuli Venezia Giulia, Lombardy, and Veneto. Should Salvini continue to struggle, there could therefore be further incentives for the party to stake out a more moderate position in the Italian party system, thereby widening its pool of voters and adopting more multi-faceted (and less extremist) stances.

By contrast, the crisis in the Five Star Movement has been more gradual. Moving away from the strong anti-establishment sentiments that characterise its unpredictable ‘moral’ leader Beppe Grillo, the party has aligned itself with more centre left positions. Tension has emerged between former Italian Prime Minister Giuseppe Conte – a figure many in the party still view as a product of Grillo – and Luigi Di Maio, who led the party from 2017 until 2020.

It is too early to predict who will win this power struggle, but Di Maio has shown signs of maturing as a politician and abandoning the naivety that once characterised his actions. By maintaining a good relationship with Giancarlo Giorgetti of the League, Di Maio could potentially open up his own political space, forming an alliance with Giorgetti and positioning the Five Star movement in the orbit of the European People’s Party. 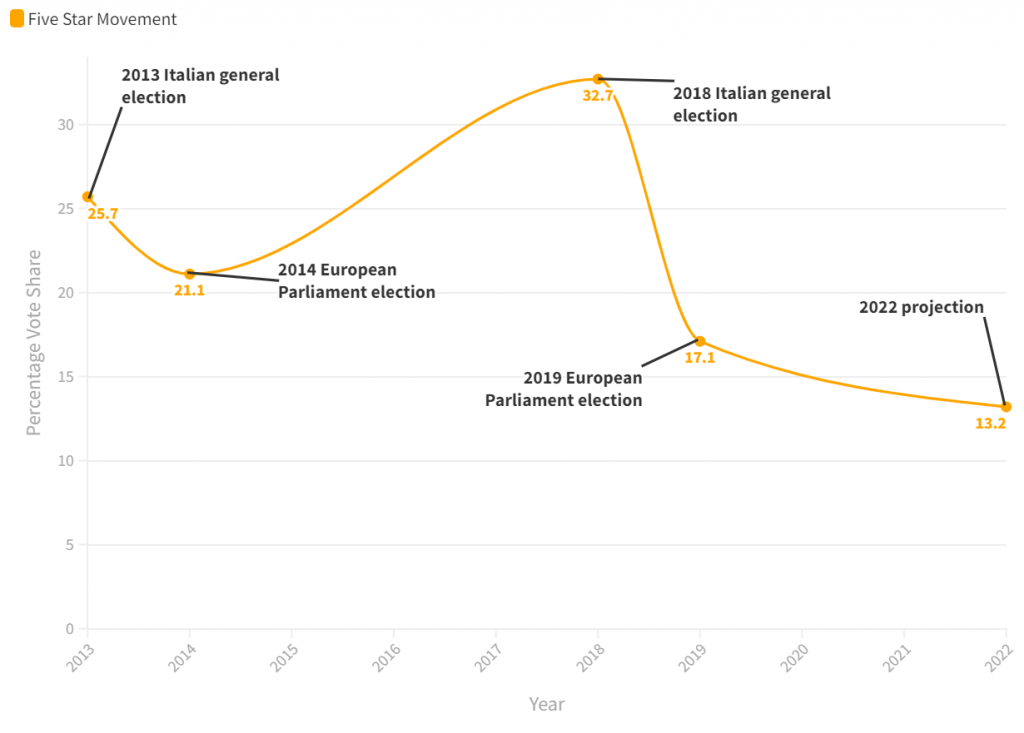 In ensuring Italy’s political stability until the next parliamentary election in 2023, the election of Mattarella has also influenced the contours of the policy debate. Within the space of only a few weeks, the political discourse has shifted from an anti-immigration, anti-establishment, and anti-EU discourse to a more substantial one focused on key issues such as health and the economy.

On 4 February, Mattarella’s speech during the inauguration ceremony was applauded repeatedly by the whole parliament. Grounded within the tradition of Christian socialism, Mattarella used the word ‘dignity’ 18 times, referring to women, migrants, and all those who are more vulnerable. The confirmation of Draghi as Prime Minister will guarantee continuity in the government, thus helping Italy to implement the National Recovery and Resilience Plan and meet the rigid European timetable on the implementation of reforms and allocations of funds.

Of course, there are some more practical and self-interested incentives for the League and the Five Star Movement to pursue a path of moderation. Under a new reform, the number of representatives in the Italian Parliament will be reduced by around 30% and representatives will be unable to enjoy full parliamentary pension rights until September 2022. This makes it unlikely that early elections will be called, which will enable Draghi to operate without the risk of being undermined by parliamentary opposition.

Put differently, Mattarella’s re-election has altered the priorities for many parliamentarians, who are typically focused on short-term office-seeking rather than the implementation of policy. There are therefore several good reasons for the League and the Five Star Movement to pursue a moderate turn. The institutional guidance of Mattarella coupled with Draghi’s leadership thus offers a window of opportunity to bring stability to the country during its recovery from the pandemic – and perhaps even to bring some temporary political peace to Italy after the turbulence of recent years.

Marina Cino Pagliarello is an Associate Lecturer at UCL and a Visiting Fellow at the LSE’s European Institute. She is also a Research Associate for LSE Consulting.