The rise of right-wing populism has been a feature of European politics over the last fifteen years. Drawing on a new report, Daphne Halikiopoulou and Tim Vlandas explain what we have learned about the appeal of right-wing populist parties, and what other parties can do to counter their success.

Following a varied and more subdued performance in the 1990s and early 2000s, the 2008 financial crisis and the 2015 refugee crisis spurred an increase in right-wing populist party support across Europe. Worryingly, these developments have taken place at the expense of the mainstream: while the average electoral score of right-wing populist parties has been steadily increasing over time, support for both the mainstream left and right has declined (Figure 1).

Figure 1: The rise of right-wing populist parties has come at the expense of both the mainstream left and right

This right-wing populist momentum sweeping Europe has three key features. First, there has been the successful electoral performance of parties pledging to restore national sovereignty and implement policies that consistently prioritise natives over immigrants. Many right-wing populist parties have improved their electoral performance over time, although there remain important cross-national variations (Figure 2).

The French Rassemblement National (RN), the Austrian Party for Freedom (FPÖ), and the German Alternative for Germany (AfD) have all increasingly managed to mobilise voters beyond their support core groups, significantly increasing their support in their domestic electoral arenas. At the same time, countries previously identified as ‘outliers’ because of the absence of an electorally successful right-wing populist party are no longer exceptional – such as Portugal with the rise of Chega and Spain with the rise of Vox. 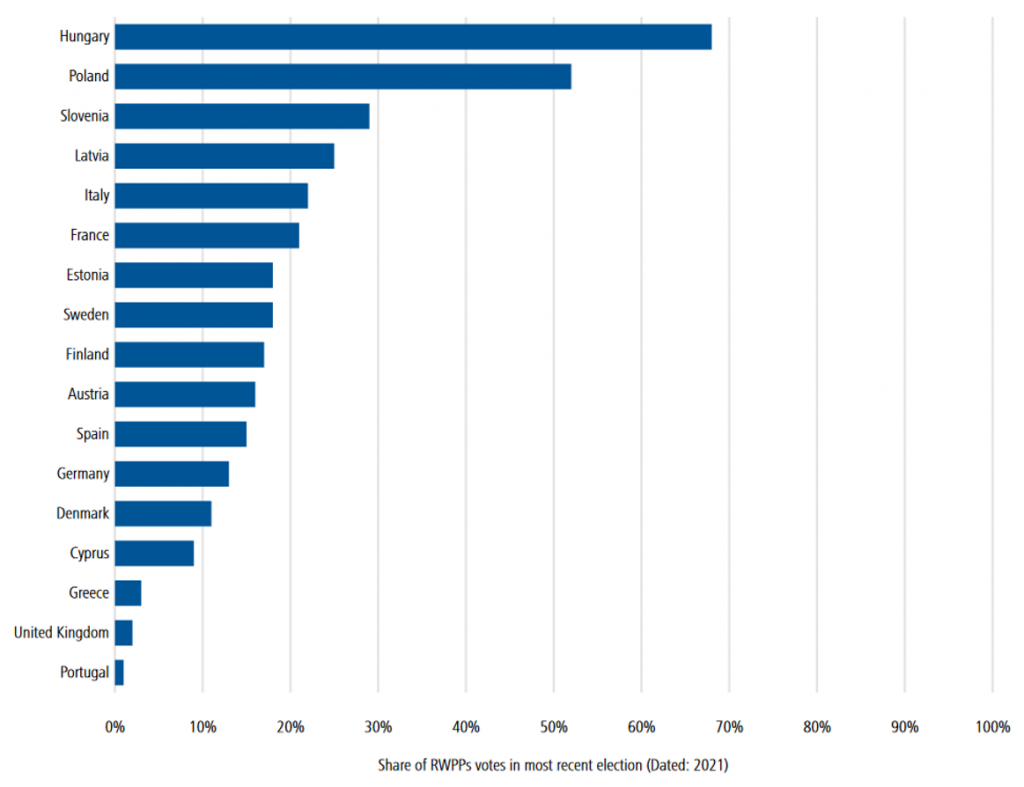 Second, there has been an increasing entrenchment of these parties in their respective political systems through access to office. A substantial number of right-wing populist parties have either governed recently or served as formal cooperation partners in right-wing minority governments. Examples include the Lega in Italy, the FPÖ in Austria, Law and Justice (PiS) in Poland, Fidesz in Hungary, the Danish People’s Party (DF), and the National Alliance (NA) in Latvia. The so-called cordon sanitaire – the policy of marginalising extreme parties – has broken down even in countries where it has been traditionally effective, such as Estonia and Sweden.

Third, right-wing populist parties have increasingly gained the ability to influence the policy agenda of other parties. Parties such as the Rassemblement National, the Sweden Democrats and UKIP have successfully competed in their domestic systems, permeating mainstream ground and influencing the agendas of other parties. As a result, mainstream parties on the right and, in some instances, on the left have often adopted accommodative strategies – mainly regarding immigration.

What explains this phenomenon? Researchers and pundits alike tend to emphasise the political climate of right-wing populist normalisation and systemic entrenchment, where issues ‘owned’ by these parties are salient: immigration, nationalism and cultural grievances. The importance of cultural values in shaping voting behaviour has led to an emerging consensus that the increasing success of right-wing populist parties may be best understood as a ‘cultural backlash’. 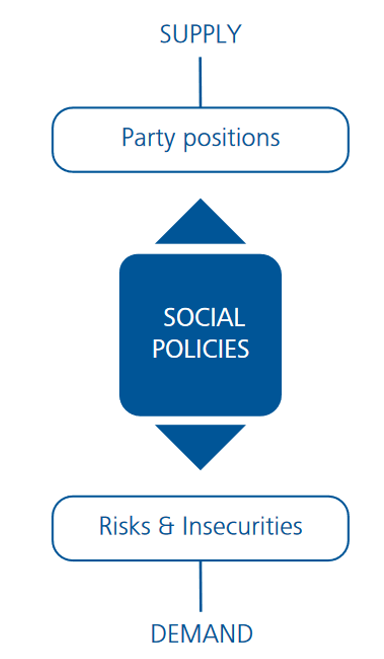 A sole focus on culture, however, overlooks three key issues at the demand, supply and policy levels, as illustrated in Figure 3 above. First, the predictive power of economic concerns over immigration and the critical distinction between galvanising a core constituency on the one hand and mobilising more broadly beyond this core constituency on the other. Second, the strategies right-wing populist parties themselves are pursuing to capitalise on multiple insecurities, including both cultural and economic. And third, the role of social policies in mitigating those insecurities that drive right-wing populist party support.

To address these issues, in a new report we examine the interplay between what we call the ‘three Ps’: people, parties and policies. With respect to people, a key question is how cultural and economic grievances affect individuals’ probability of voting for a right-wing populist party. Similarly, how are these grievances distributed among the right-wing populist party electorate?

We argue that the assumption that immigration is by default a cultural issue is at best problematic. Both cultural and economic concerns over immigration increase the likelihood of voting for right-wing populist party (Figure 4). 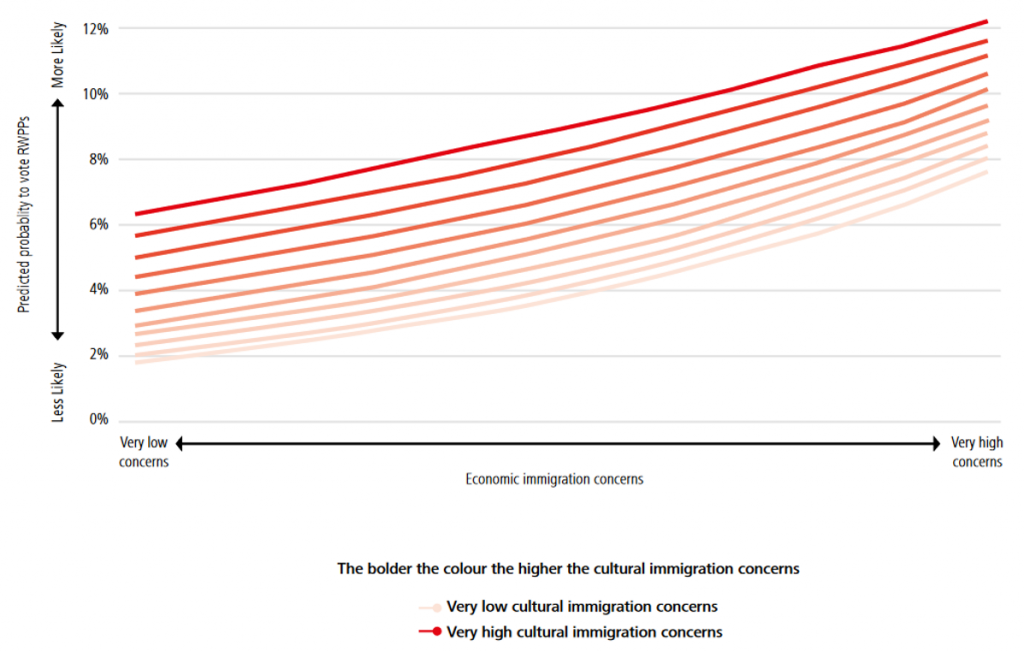 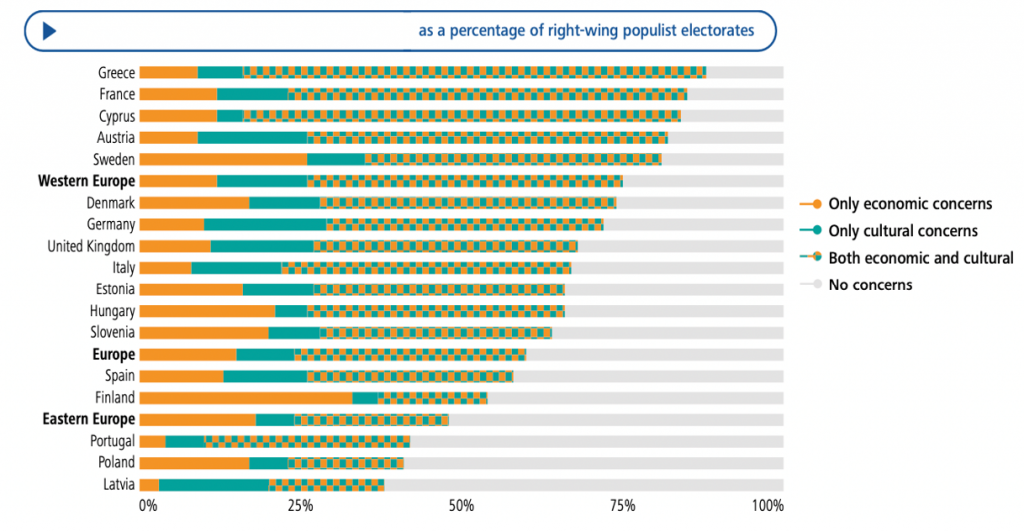 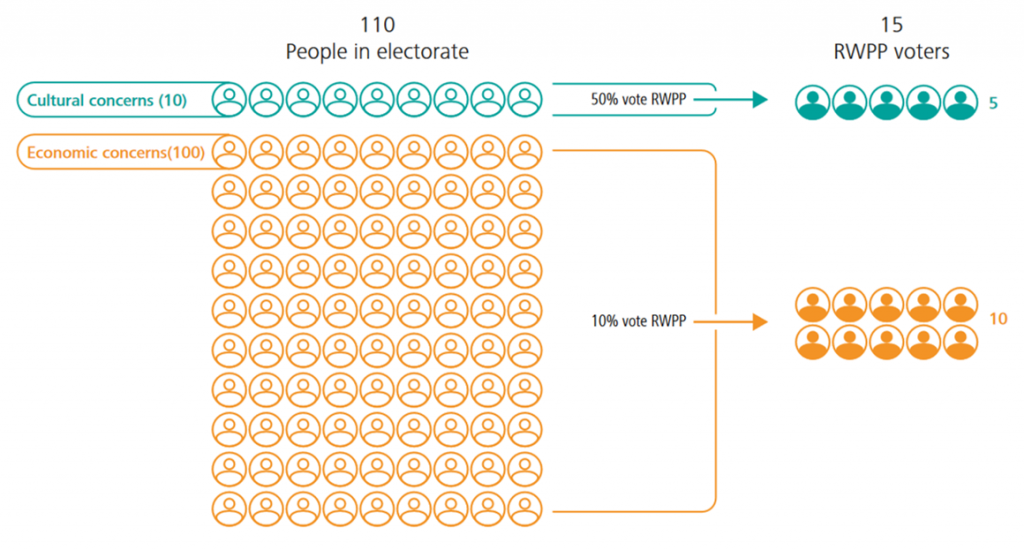 What determines right-wing populist party success is therefore the ability to mobilise a coalition of interests between core and peripheral voters. As the hypothetical example in Figure 6 shows, it is possible that right-wing populist parties galvanise voters with cultural concerns over immigration, while at the same time their success is dependent on their ability to mobilise economically concerned voters more broadly.

Right-wing populist parties in Western Europe employ a civic nationalist normalisation strategy that allows them to offer nationalist solutions to all types of insecurities that drive voting behaviour. This strategy has two features: it presents culture as a value issue and justifies exclusion on ideological grounds; and focuses on social welfare and welfare chauvinism. 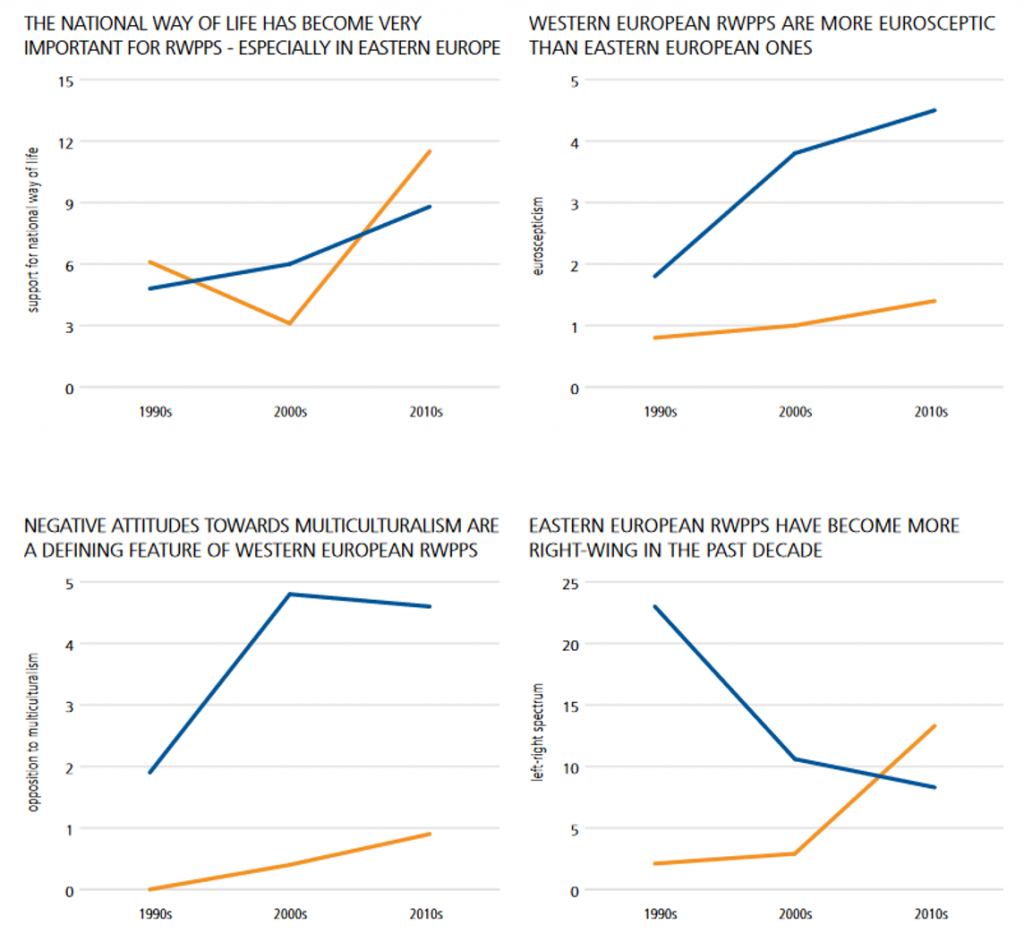 What type of policies can mitigate the economic risks driving different social groups to support right-wing populist parties? European democracies have operated in a context of falling economic growth rates over recent decades, with recurrent economic crises in the 1970s, early 1990s and from 2008 onwards.

Many advanced economies have in time recovered, but growth has often not returned to the level of previous decades and achieving low inflation has been a policy priority. Many governments have liberalised and ‘activated’ their labour markets (Figure 8) often at the expense of a growing group of so-called labour market outsiders in precarious contracts.

Figure 8: Rising expenditures and liberalised labour markets in the context of falling growth and increased needs 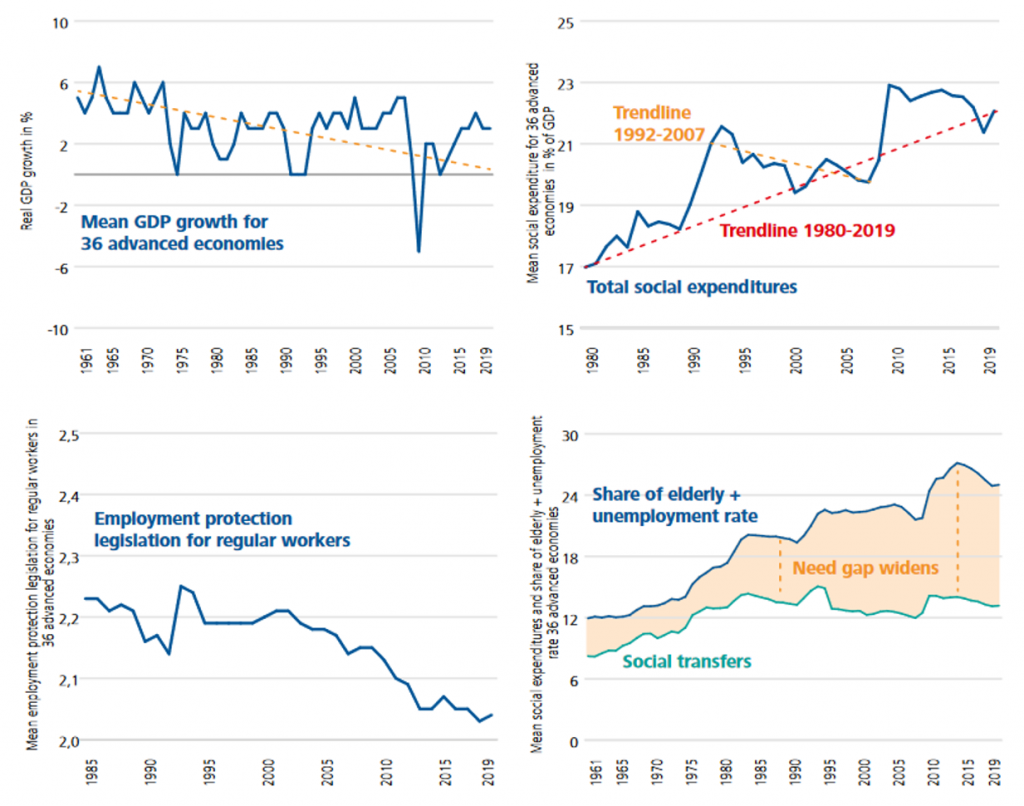 In addition, accumulating debt is leading to a climate of permanent austerity while constraining the necessary physical and social investments that could underpin future growth. While economic developments obviously affect the life chances and insecurities of individuals, as well as the risks that they face, the degree of redistribution and the social insurance provided by developed welfare states shapes their prevalence and political consequences.

Welfare state policies moderate a range of economic risks individuals face. Our analysis illustrates that this reduces the likelihood of supporting right-wing populist parties among insecure individuals – for example, the unemployed, pensioners, low-income workers and employees on temporary contracts.

Our key point here is that political actors have agency and can shape political outcomes: to understand why some individuals vote for right-wing populist parties, we should not only focus on their risk-driven grievances, but also on policies that may moderate these risks. This is consistent with a larger political economy literature documenting the protective effects of welfare state policies on insecurity and inequality.

What to do about it?

While this is a broad phenomenon, there is no single success formula for right-wing populist parties. Our analysis identifies regional patterns and different voter bases and grievances driving right-wing populist party success across Europe. Progressive strategies addressing those necessarily face different obstacles depending on the context. For instance, the Western European centre-left has a better chance of focusing on welfare expansion as an issue they ‘own’ than many counterparts in Eastern Europe who have lost the ownership of those issues to right-wing populist parties that promote distorted nationalist and chauvinist versions of similar ideas.

Centre-left parties should not be fooled into thinking they can simply copy the right-wing populist party playbook by going fully populist and embracing restrictive immigration policies and questions of national identity. Instead, they should appeal to the economic insecurities that many peripheral right-wing populist party voters are concerned about, focusing on an issue the centre-left ‘owns’ such as equality. After all, centre-left voters tend to be pro-immigration and a nationalist turn will likely alienate them.

Figure 9: Distribution of immigration concerns as a percentage of centre-left electorates

Successful centre-left strategies must attempt to galvanise the centre-left’s core voter base, addressing the (economic) grievances that concern much larger parts of the whole electorate. Therefore more energy should be invested into thinking about new social investment strategies, growth regimes and/or a universal basic income, rather than focusing purely on the cultural concerns of a small part of the electorate. 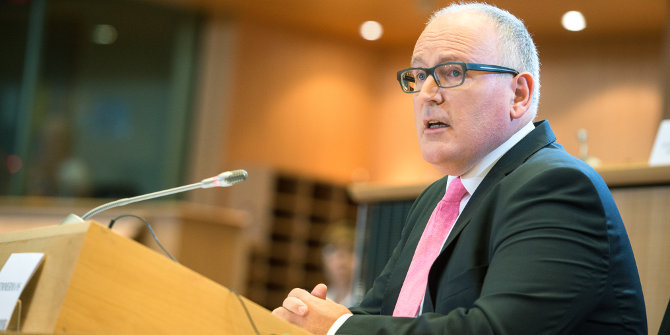