EU treaty reforms have progressively increased the power of the European Parliament by making it a co-legislator with national governments in many important policy areas. But have these reforms had a positive impact on the EU’s democratic legitimacy? Drawing on a new study, Miriam Sorace demonstrates that decisions made jointly between national governments and the European Parliament tend to match public opinion more closely than those made by governments alone. This suggests that further empowering the Parliament and reducing the use of unanimous decision-making would help tackle the EU’s democratic deficit.

Scholars disagree over the effect that territorial weights have on the democratic quality of a political system. Some argue that fully democratic legislatures need to vote simply by ideological majorities in most policy domains – i.e. those that affect all citizens as individuals rather than territories and/or do not generate permanent minorities. Others argue that for large, decentralised political systems, territorial vetoes are always required, and do not see a plausible link between embedding territoriality in legislative institutions and democratic deficits.

In a recent study, I have looked at whether territorial vetoes in decision-making make it difficult for a political system to deliver the policies that citizens want by looking at the case of the European Union. The EU is a heavily territorial political system, which is often challenged on democratic deficit grounds, and which is currently undergoing constitutional reflection, as the Conference on the Future of Europe process attests. Examining the EU is particularly salient, since many policy challenges are, in our globalised world, supranational in nature; and since the EU is taken as a model by many other global governance institutions.

In the EU, some important policy issues are still exclusively decided by the Council of Ministers (with one minister from the executive branch of each member state) via unanimity. The European Parliament has been progressively empowered, most notably through the codecision reform, which gives it the same veto powers as the Council, effectively making it a co-legislator. The codecision reform has, however, been applied in stages: different policy areas were assigned codecision in different treaty reform rounds, and often only subsets of the policy area were assigned codecision.

I leverage this ‘staggered’ application of codecision – a reform that weakened the weight of member states in EU law-making – by looking at the case of EU employment and social policy. In EU employment and social policy, codecision was only applied in 1999 with the Amsterdam Treaty, and only to a subset of such policies: those that were assigned the cooperation procedure before 1999. Whilst the cooperation procedure granted slightly more powers to the European Parliament, its role was still largely consultative, and the territorial chamber (the Council of Ministers) retained its nearly absolute veto power.

I thus compare EU employment and social policies that were decided under the most territorial procedure (consultation) to EU employment and social policies that were decided by cooperation before 1999 and by codecision after 1999. This setup allows for a ‘difference-in-differences’ causal analysis and means we can control for time-varying characteristics that might impact on EU policy and public opinion, such as the role of economic downturns, as well as characteristics specific to each sub-domain of EU employment policy (for example the salience of policy proposals).

The texts of EU employment and social policies were analysed by samples of online human coders and were placed on the pro-worker or pro-business side on the basis of a thoroughly piloted and validated text analysis codebook. Each EU policy was then matched to European public opinion positions on the economic left-right scale (using Eurobarometer data as well as data from Devin Caughey, Tom O’Grady and Christopher Warshaw). The main outcome measured is the standardised difference between EU policies and European public opinion.

I find that EU policies decided by codecision more closely track shifts in public preferences than those decided using other decision rules. Figure 1 below shows the main results from the analysis graphically by plotting the policy-opinion standardised distances over-time and by policy sub-topic/group. The image shows that post-1999 legislation decided by consultation (the most territorial procedure) is farther from public opinion than legislation adopted under codecision.

This means that EU legislation in employment policy tended to further deviate from the public mood after 1999. Had codecision not been introduced, we would have therefore seen an overall increase in policy-opinion mismatches in this policy area post-1999 (the complicating effect of enlargement on the Council-led aggregation of European public opinion might be a reason for this post-1999 trend). Legislation decided by codecision also appears to better track the public mood than that decided by cooperation.

There are some signs, therefore, that codecision – a reform that fundamentally changed how EU laws are passed by increasing the powers of the European Parliament and majoritarianism in the Council – has indeed improved the democratic credentials and the democratic legitimacy of EU policies (measured as the policy-opinion link).

These findings furthermore lend credence to the expectation from democratic theory that strongly territorially weighted decision-making rules can hurt the democratic legitimacy of policy outputs. My study thus has implications for any political system that strongly relies on territorial representation: democratic discontent, in fact, is expected to be higher in such systems since their policies are expected to track public opinion preferences less well.

Note: This article gives the views of the author, not the position of EUROPP – European Politics and Policy or the London School of Economics. Featured image credit: CC-BY-4.0: © European Union 2022– Source: EP 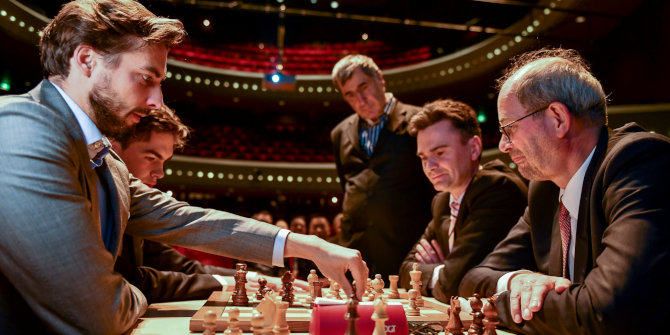