How far right are the supporters of the new Italian government?

How far right are the supporters of the new Italian government?

Fratelli d’Italia and the Lega, the two largest parties in the new Italian government, are typically referred to as ‘far-right’ parties. But how far right are these parties’ supporters? Using original survey evidence, Johannes Kiess and Hans-Jörg Trenz assess the democratic attitudes of those who voted for the new governing parties.

Many observers of Italian politics described the victory of the right-wing coalition led by Giorgia Meloni in the Italian general election on 25 September as a shift in the Italian party landscape. Several of these observers have argued that Meloni’s Fratelli d’Italia has left its post-fascist history behind and moved toward a more moderate platform with the aim of gaining support from a broad majority of Italians.

Much the same claim has been made about Fratelli d’Italia’s coalition partner, the Lega, led by Matteo Salvini. In both cases, the argument is that these once extreme parties have moderated their stances to such an extent that they should no longer be regarded as being on the far-right of the party spectrum. This ties in with the labelling used in political debates in Italy, where both parties are commonly referred to as belonging to a ‘centre-right coalition’.

But while it is true that there are more extremist right-wing parties, like Forza Nuova, that are not represented in the Italian parliament, it remains an open question as to how moderate Fratelli d’Italia and the Lega have become. Do they really represent new mainstream conservative parties, in the tradition of liberal-western democracy? Is there a distinction between these parties and parties such as the Alternative for Germany (AfD) or the French Rassemblement National?

The argument of a shift of party ideology in the wake of the 2022 Italian election is commonly grounded in the analysis of party manifestos and public speeches of party representatives. Leaders of both parties are indeed not radically rejecting democracy in a fascist-authoritarian tradition and instead promote a form of ‘ethnocracy’ based on a sovereigntist ideology.

This nevertheless needs to be seen as a radical reinterpretation of democracy with strong authoritarian and illiberal elements, which deviates in important ways from centre-right conservatism as we knew it in post-war European democracies, such as Christian Democrats in Italy and Germany, and Gaullism in France.

While political leaders might change their rhetoric for strategic reasons to appear more mainstream in public debates, they still respond to the more radical opinions of their electorate. It is therefore important to check whether the attitudes of the voters of these parties also align with the programmatic shift in the statements of their leaders. Thus, are voters of both the Lega and Fratelli d’Italia embracing democratic values or can they be distinguished by their antiliberal and authoritarian attitudes from centre-right and other democratic voters?

To answer this question, we use survey data from the Valcon project, financed by the Volkswagen Foundation. This data was collected in spring 2021 using representative online panels. Even though the survey was completed one year before the election, it still allows us to assess the political attitudes of respondents in alignment with their voting intentions.

We first compare attitudes of respondents who indicated a preference for the Lega and Fratelli d’Italia to respondents with other party preferences in Italy. Secondly, we compare these with respondents who indicated a preference for the AfD in Germany and the Rassemblement National in France. The latter have both been described universally by experts as far-right parties. Do Italian right-party voters share similar radical attitudes or are they, as has been claimed, more mainstream? In line with the literature on far-right politics, we focus on the authoritarian-illiberal attitudes shown in Table 1 below.

Table 1: Responses to political statements in Germany, France and Italy 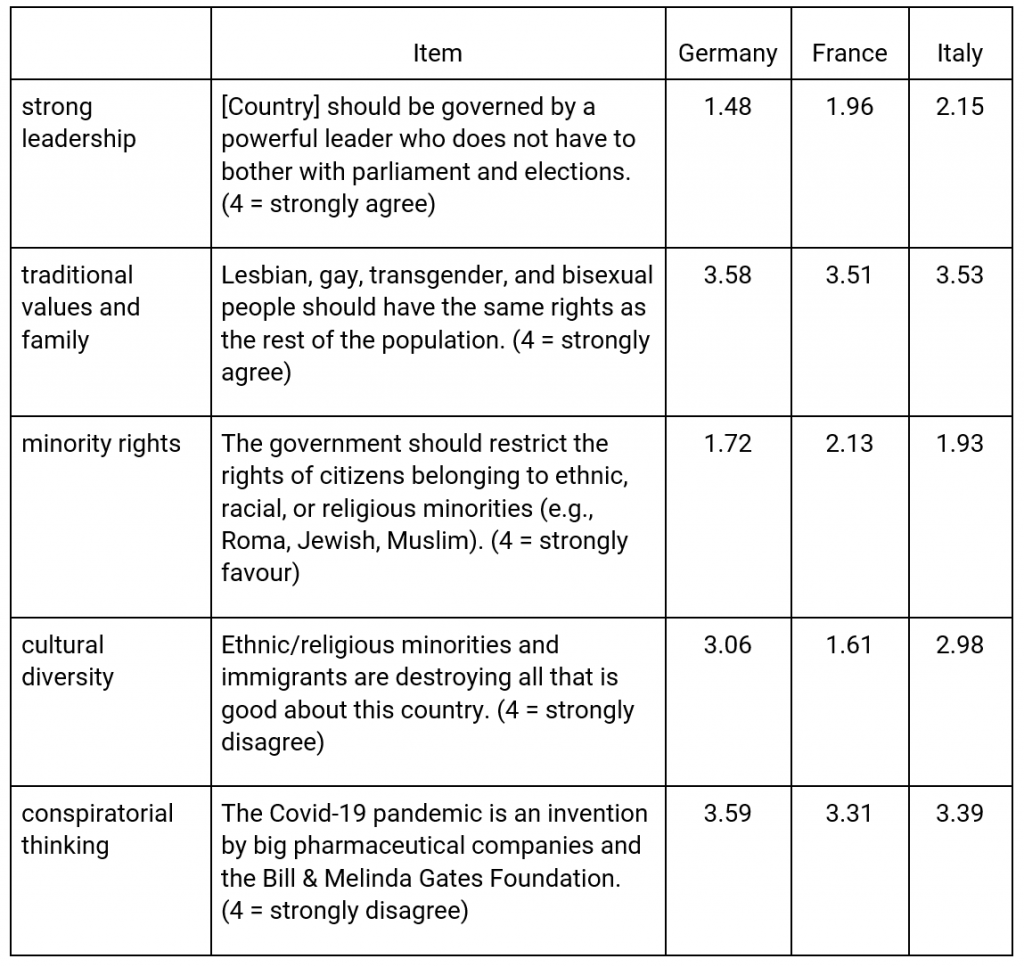 Note: The table shows mean responses to each statement on a scale from 1 to 4. Compiled by the authors using survey data from the Valcon project.

As Table 1 indicates, Italians hold stronger authoritarian views than citizens in France and Germany with regard to their longing for a powerful leader and their opposition to pluralist interests and the complexity of modern society. However, they have relatively moderate views with regard to the restriction of rights of ethnic minorities, and equality of rights for LGBTIQ people, and tend not to support conspiracist statements regarding the Covid-19 pandemic.

Table 2: Approval of antiliberal views by party preference in Italy

Note: The table shows mean responses on a scale from 1 to 4 for each party. Compiled by the authors using survey data from the Valcon project.

The supporters of Fratelli d’Italia and the Lega differ in important ways in their attitudes from supporters of moderate conservative parties. We can observe a classic left-right continuum in Table 2 when it comes to authoritarian-illiberal attitudes in Italy, as well as in Germany and France (not displayed here) with the respective far-right parties corresponding with the most authoritarian constituencies.

In the case of Italy, it is noteworthy that non-voters are also less authoritarian-illiberal, meaning that both Fratelli d’Italia and the Lega have successfully mobilised their core electorate. As the combined vote share of the governing parties in the 2022 general election was not dramatically higher than in the previous election in 2018 (though with a considerable redistribution from the Lega to Fratelli d’Italia) it is plausible to assume that this mobilisation of the core electorate is also what brought the far-right coalition to power.

The value attachment of the electorate of the new Meloni government thus remains closer to voters of recognised far-right parties, such as the AfD and Rassemblement National, than to supporters of traditional conservative parties. The public mainstreaming strategies of Meloni and Salvini have been wrongly understood as an attempt to build a broader constituency of the centre-right in Italy. In reality, their electoral bases still consist of voters with firmly illiberal and authoritarian worldviews, as well as a significant belief in conspiracies.

It is therefore premature to talk of a shift in the Italian party landscape, as leaders might soon return to more radical rhetoric in line with the preferences of their supporters. Critical observers of Italian politics should not be fooled by the democratic vows of party leaders. Both Fratelli d’Italia and the Lega have consistently defended the positions of the radical right, whether in articulating authoritarian, nativist, and conspiratorial thinking, opposing gender equality measures, or even voicing outright racism and antisemitism in the past. In all likelihood, members of both parties will continue to do so in the future.

Note: This article gives the views of the authors, not the position of EUROPP – European Politics and Policy or the London School of Economics. Featured image credit: Presidenza della Repubblica

Hans-Jörg Trenz is Professor of Sociology of Culture and Communication at Scuola Normale Superiore.