Do European voters cling to democracy under all circumstances?

Do European voters cling to democracy under all circumstances?

Why in many countries around the world do citizens, who favour democracy, vote for political actors who subvert it? This question has been puzzling many scholars. Against this background, I (alongside my co-authors) have published a study drawing on an experimental survey of people in seven European countries: Estonia, Germany, Poland, Serbia, Spain, Sweden, and Ukraine. Our research paints a clear picture of how democratically elected politicians get away with ‘autocratising’ their country.

Democracy is still valued by voters

The data from the survey, which captured voters’ attitudes toward democracy, confirm that democracy, as a form of government, is still favoured by a majority of respondents in each of the seven countries. Most respondents indicated it is ‘very important’ for them to live in a country that is governed democratically. On a ten-point scale, Estonia recorded the lowest mean score (8.1) for this question, while Sweden had the highest (8.8). A great majority of respondents also find having a democratic political system either ‘very good’ or ‘fairly good’: ranging from 77% in Poland to 93% in Sweden.

What is more, voters also value democratic principles enough to punish political candidates who violate them. Indeed, in an electoral contest between a democratic candidate and a candidate who advocates policies that violate one of the key tenets of democracy (electoral fairness, civil liberties, and checks and balances), the former would emerge as a clear winner. Across the entire sample, the undemocratic candidate would lose on average 7.8% of their overall vote share, albeit with significant differences between the seven countries (see Figure 1).

Support for democracy is not unconditional

The survey thus confirms that citizens care for democracy and are willing to defend it. But are there any circumstances under which they would cease to act as a watchdog of democracy and start to tolerate undemocratic behaviour? Unfortunately, the answer is a clear ‘Yes’.

In all countries under investigation the respondents show a strong willingness to forgive undemocratic behaviour of candidates from their favourite party (this particularly applies to voters for far-right parties) and advocates for their favourite identity-related policies that concern issues such as immigration, same-sex couples’ rights, the use of minority languages, and pro-EU vs. pro-Russian orientation (see Figure 2).

Figure 2: The effect of partisanship on electoral punishments for undermining democracy 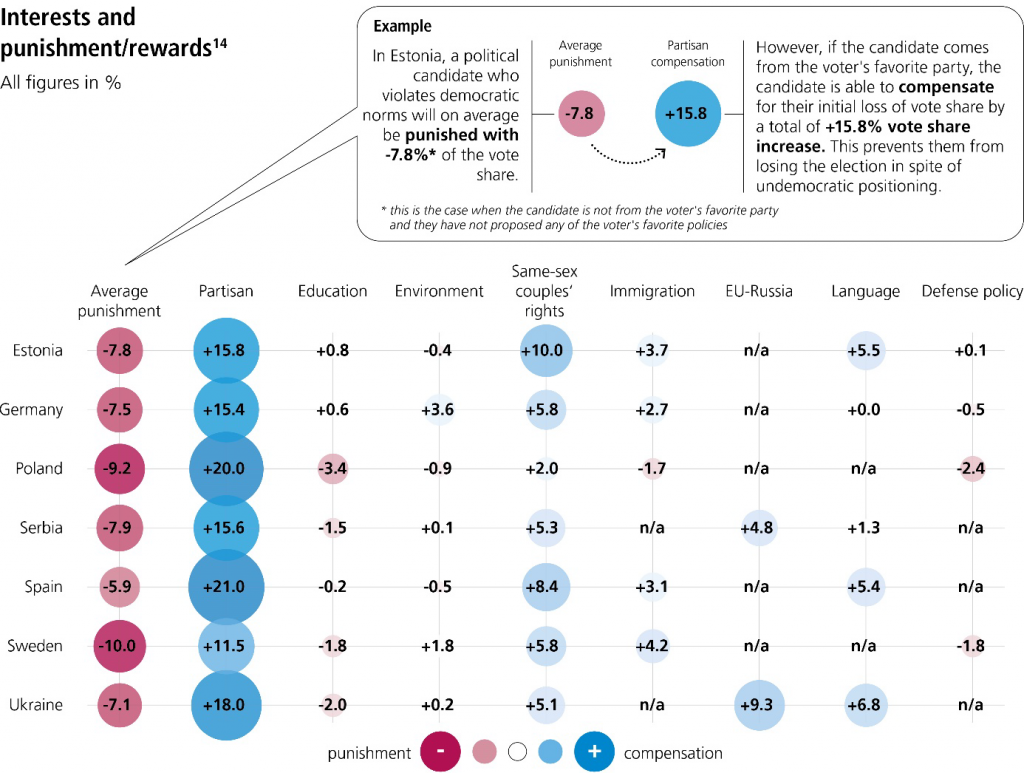 Hence, the survey establishes that partisan and group loyalties are key drivers of electoral behaviour. In other words, group-related interests or demands for group respect and recognition trump democracy. This holds true for both consolidated democracies such as Sweden and Germany and defective democracies such as Serbia.

Polarisation and tolerance for undemocratic behaviour

Why are group interests so important to voters that they would choose them over democratic principles? One explanation that has been put forward by the scholarly community is that greater polarisation in politics has increased voters’ willingness to tolerate undemocratic behaviour. Put simply, as politics becomes more polarised, voters may be more inclined to disregard democratic violations than see their ‘camp’ lose.

However, the data from our survey, which also measured policy polarisation, only partially confirm this argument. The willingness to forgive undemocratic behaviour for some specific interests indeed correlates with the existence of increased polarisation along these issues. This concretely applies to same-sex couples’ rights in all countries under investigation bar Spain; immigration in Sweden, Estonia, and Spain; the use of minority languages in Spain, Serbia, and Ukraine; the environment in Sweden, Serbia, and Germany; and EU-Russia foreign policy orientation in Ukraine.

Yet we can observe the willingness to forgive undemocratic conduct for non-polarising issues as well, and a great majority of this is related to identity. This concerns same-sex couples’ rights in Spain; immigration in Germany; EU-Russia foreign policy orientation in Serbia; education in Germany and Estonia; defence policy in Estonia; the environment in Ukraine; and the use of the Russian language in Estonia. Therefore, we still do not have a full picture on why, when and how group interests affect political behaviour.

The future of democracy

The conclusion emerging from this analysis is that there are reasons to be concerned about the future of democracy. The data from the experimental survey clearly demonstrate that even established democracies are vulnerable and susceptible to democratic backsliding induced by a leader who disregards democratic norms in the name of group-related interests.

Hence, our key insight is that a desire for the candidate who promises to protect group interests, even at the expense of democracy, is latent in every electorate, from defective to consolidated democracies. To ensure democracy’s future, it will be essential to explain why and under which circumstances this disposition can be elicited to produce tolerance for undemocratic conduct in a real-world setting.

For more information, see the author’s accompanying report, co-authored with Elena Avramovska, Johanna Lutz, and Milan Svolik, and published by the Friedrich-Ebert-Stiftung.

Note: This article gives the views of the author, not the position of EUROPP – European Politics and Policy or the London School of Economics. Featured image credit: Patrick on Unsplash

Filip Milacic is a Senior Researcher for Democracy and Society at the Friedrich-Ebert-Stiftung’s (FES) Office ‘Democracy of the Future’ and a Research Affiliate at the Central European University’s (CEU) Democracy Institute. His new book, ‘Stateness and Democratic Consolidation: Lessons from Former Yugoslavia’, was published by Springer in 2022. 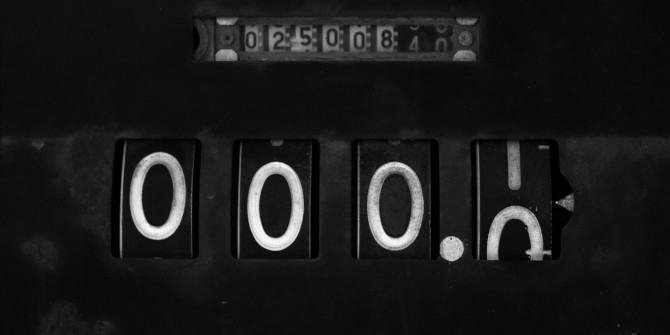