Dulma Clark is an MSc student in the Centre for the Study of Human Rights. Her film “Safina” screened at the Human Rights Watch Film Festival in London earlier this year. Fellow MSc student Lily Kendall caught up with her to find out more. 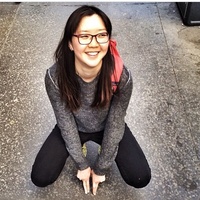 Safina is based on a true story about a girl trafficked from Ghana and sold into sexual slavery in Glasgow. The ten-minute short highlights some of the key difficulties faced by girls in their engagement with the British authorities, especially when their age is ‘undetermined’.

I met Dulma on LSE campus to find out where the story came from. “We made the film especially for a film festival in London organised by Unchosen“, Dulma tells me. Unchosen is an organization that raises awareness of trafficking and forced labour through film. Their 2013 competition was so successful that it’s set to become an annual event. “The rule was that they provided case studies and we had to pick one. We selected this one and our film made the top five.”

After a premiere in London last September it formed part of the Unchosen Roadshow, which is currently touring the UK and Ireland. It also featured in the Human Rights Watch film festival at the Ritzy cinema in Brixton earlier this year.

I asked Dulma why human trafficking appealed to her as a subject. “I’ve worked at a charitable foundation for two years now, and I did research for them on human trafficking, especially women trafficked in Eastern Europe, so I’ve been travelling to Albania and so on tracking the route of traffickers.”

It was vital to her, then, that the film authentically captured the nuanced difficulties faced by trafficked women. Unchosen’s project appealed both to her and the film’s production company, Soul Rebel Films, owned by her husband Tony Clark. “We did the first draft ourselves and hired a professional writer to look through and change things. I was there as a script supervisor to give more factual information. We wanted to show how trafficked people are treated by government officials.”

Sometimes the process of intense questioning and encounters with lots of strange faces only serves to re-victimise trafficking survivors, she tells me. “We had to work through all these stages: when they find the girl on the street; how they start tracing the story back and decide to believe or not believe whether she’s sixteen or seventeen – because that makes a big difference. If you’re underage they put you in a safer environment, they send you to social services and find a place for you to stay.”

It’s clear a lot of research has gone into the making of Safina; in only ten minutes it’s remarkable how many issues the film touches. I wasn’t surprised when Dulma told me that she spoke to lawyers and representatives from the UK Border Agency to make the dialogue feel authentic, after all, Unchosen use the winning films as educational tools. “We had so many different drafts,” she says, shaking her head, “we worked on it for so long before making the movie – that part only took two days.”

After the success of Safina, is filmmaking something she wants to pursue? “We’re looking into making a documentary about Odanadi [an anti-trafficking organisation] but we’ll see. It would be great to look into trafficking cases around the world but that would take a lot of time…”

Does she get time to sleep? “I’m on the part-time masters course. Otherwise I’d be dead by now!”

The project was clearly a labour of love for her and her husband. Before we part, I ask her what it is about filmmaking as a medium that she feels adds to the conversation about human rights issues. “With our on the one hand lazy and on the other hand extremely busy population it’s very difficult to grab their attention,” she tells me. “Film can give a strong emotional impact and reach a wide range of people within a short amount of time.”

No monkeying around: animals can and will have human rights