Australia’s so-called ‘ideas boom’ comes at a cost to research funding and sustainable infrastructure, Kanishka Jayasuriya and Carol Johnson write. An emphasis on entrepreneurial culture at the expense of wider public research investment risks socialising the risks of research and privatising the benefits, which ultimately may do lasting harm to both sectors.

Innovation is a central part of Australian Prime Minister Malcolm Turnbull’s political agenda. He highlighted innovation issues when he recalled parliament in the lead-up to a possible early double dissolution election, and recently Assistant Minister for Innovation, Wyatt Roy, waxed lyrical on ABC’s Q&A television show about the “innovation ecosystem” the government is fostering. We have been promised an ‘ideas boom’ to replace the mining boom.

This is to be welcomed. However, in pursuing this, the government has made significant changes to research funding and shifted the balance between public and private benefit in favour of the latter. The recent Watt Report on research funding led to the use of impact measures as key drivers of research funding, in part measured by income generated via collaboration with industry. The government will also cut block grant funding based on publications (in which academics report, discuss and exchange their ideas). This funding is crucial to furthering knowledge. Malcolm Turnbull has suggested that an emphasis on ‘publish or perish’ provides the wrong incentives and can prevent engaging with industry.

The innovation agenda states that: ‘innovation is about new and existing businesses creating new products, processes and business models. It is also about creating a culture that backs good ideas and learns from taking risks and making mistakes.’ Whose interests and benefits are served by this? By creating a so-called entrepreneurial culture, we risk socialising the risks of research and privatising the benefits on the back of Australia’s public research infrastructure. 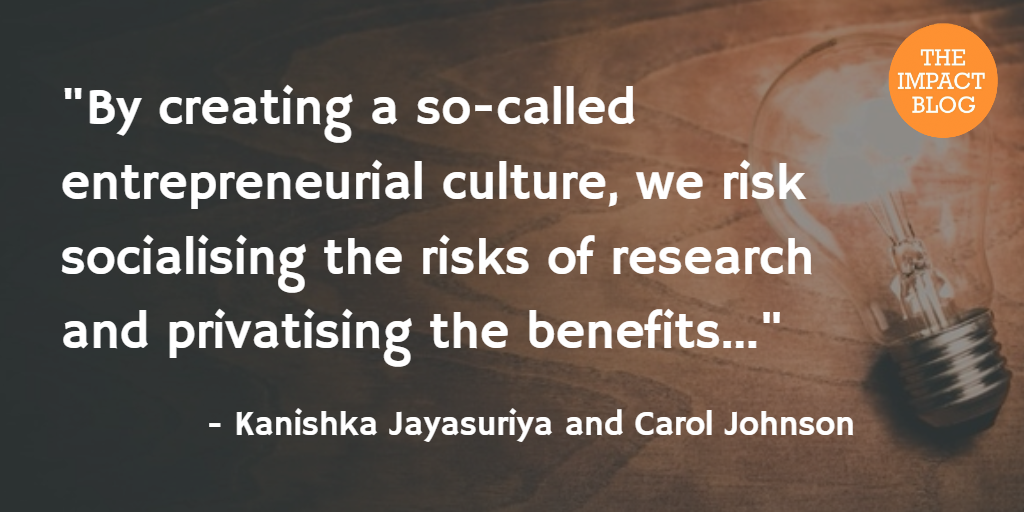 The Watt Report assumes a lethargic public sector and an innovative private sector, whose research and development (R&D) efforts benefit from linkages between private sector – the small tech start-ups – and the public sector. Yet the evidence indicates otherwise. In Australia, the research intensity of business spending trails the OECD average, let alone the leaders in R&D. In contrast, the research intensity of higher education is above OECD levels.

There is an ideological edge to this new agenda that sees the private sector as the key driver of innovation, with Silicon Valley firms often used as examples of thriving entrepreneurial start-ups. However, many of those technologies would not have been possible without the substantial investment of the US government in the basic sciences and public research infrastructure.

Moreover, as science policy researchers, including the recent work of Mariana Mazzucato have shown, the assumption of thriving entrepreneurial start-ups is more ideological myth than reality. In reality, most research and development is undertaken by large firms, and Australia’s large firms – many in the mining and agricultural sector – have not been big spenders on R&D. Added complications to private sector research funding stem from short-term decision-making – driven by the financialisation of the economy and concern over shareholder value – that can be a powerful factor in preventing increased R&D funding.

The assumption that the private sector’s research intensity can simply be enhanced through policy tweaking of the funding system owes more to ideological beliefs in the innovative capacity of market forces than strong evidence. Shifting the balance between the public and private sector may do harm to innovation across both sectors. 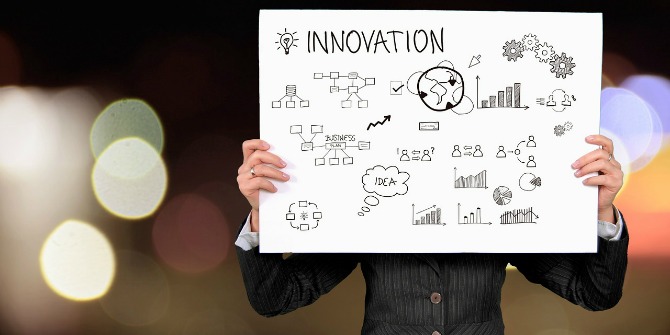 In this context, it is concerning that public investment in the higher education sector is declining. A key problem is the low funding of the indirect cost of research — as low as 22.5 cents in the dollar — which contrasts unfavourably with leading OECD countries. In the UK, for example, there is substantially more funding of the full cost of research than in Australia. The European Commission framework program requires full costs for its research funding, and Australia does not fare well in comparison with the EU. In Germany, strong investment in public research infrastructure drives innovation across the economy, and in Asia, countries such as Korea and China are making substantial investments in public research capacity. The Watt report fails to address the pivotal issue of funding the indirect cost of research for universities.

This agenda will have a particularly deleterious effect on the social sciences. There is a narrow understanding of ‘industry’ that does not reflect the diverse industries that make up a successful 21st Century economy. For example, issues around the broad service industries sector, including aged care, and  ‘cultural’ industries, are increasingly important in the emerging post-industrial capitalist economy. It is striking that the various policy documents have no definition of “industry”. A broad definition of industry encourages a much wider cross-section of academics from different disciplines (including the humanities) to gauge their contribution.

This crystallizes core concerns about an agenda that marginalises the public benefits of research. For example, social science research can help to understand the market for Australian-produced food and beverages among the Chinese middle class, that is partly driven by Chinese consumers’ concern over the lax nature/ implementation of Chinese food regulation. Social science research can identify the areas of concern, analyse why that implementation is lax, and whether it is likely to change. The same is true over the impact of India’s tariff, taxation regime and food labelling laws on Australian wine exports. Similarly, social science research can throw light on whether Australian consumers are resistant to genetically modified products, or products that include nanotechnology; or can enable an understanding of the economic and social impacts of the increased introduction of robotics and 3D printing.

The consequence of this agenda is to establish a regulatory framework for research funding, creating the fiat currency of impact that will allow the valuing and monetisaton of academic research. Whose interests, whose benefits, are being served by this new agenda?

This piece originally appeared at The Policy Forum and is reposted with the authors’ permission.