A predicted exodus of EU academics from UK universities has not yet materialised. Helen de Cruz discusses why – despite the uncertainty hanging over their future status and rights – the “brain drain” has not really begun yet. Finding new posts, especially at a very senior level, can take time; hiring systems elsewhere in Europe are opaque and sometimes not meritocratic; many academics have put down roots in the UK; and other Anglophone destinations are not always attractive. 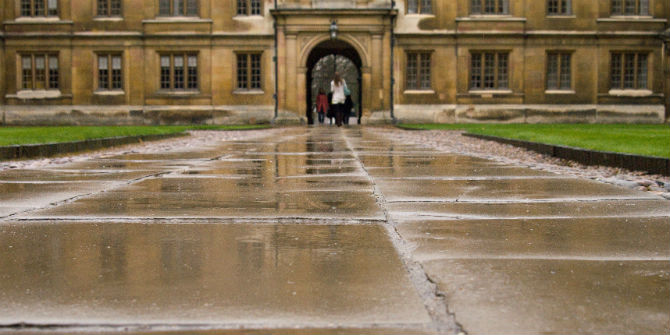 Image credit: Clare College by AdamKR. This work is licensed under a CC-BY-SA 2.0 license.

The picture becomes even more puzzling if we consider the “perks” of UK academia. Just to mention a few:

I’ve offered reasons why the brain drain isn’t happening yet in spite of the UK’s awful treatment of EU nationals working there, and in spite of the bleak prospects for UK academia (loss of Erasmus and the Horizon 2020 programme). EU countries could, if they wanted, sweep up UK-based academics with an excellent track record in research and grants.

While there is no exodus yet, I am not exaggerating that almost every EU citizen who works as an academic in the UK I have spoken to is contemplating to leave. Currently they’re waiting and seeing what the negotiations bring. But if there is no deal on citizen rights UK academia will lose out, and Trump and guns might not seem so horrible after all. For many, it has become an issue of when, not whether, they’ll leave the UK.

This post is republished from the LSE Brexit blog under a CC BY-NC-ND 2.0 UK license. It first appeared on the author’s personal blog.