In February, 27 students from the M.Sc. Health and International Development program travelled to Geneva, Switzerland to visit various international health-related organizations. This trip was organized by the student Geneva trip committee (Matilda, Bryan and Ellie) and accompanied by Prof. Ernestina Coast, the HID program coordinator, and Dr. Rishita Nandagiri, an LSE fellow in the International Development Department. Shruti Cheriyan and Kassandra Jones tell us more. 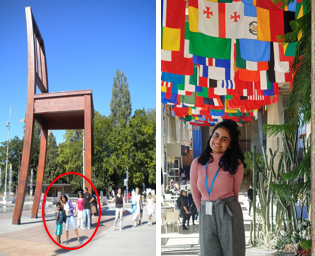 Seven years ago, my family and I (Shruti) visited Geneva as tourists to explore the city and see some of the UN headquarters. As we took photos in front of the organizations’ gates, I hoped that I would one day return to the city and be able to walk through those gates. Seven years later, I did exactly that. The experience was surreal because that kid from seven years ago would never have thought her fantasies would manifest to reality.

Our trip to Geneva is the most anticipated trip of the year. This trip was recently introduced to our program in order to enable students to meet with international organizations that are working in the field of health.

We landed in Geneva on the 23rd of February, and we took the afternoon to walk around the streets under the stunning twilight before preparing for a busy two days. 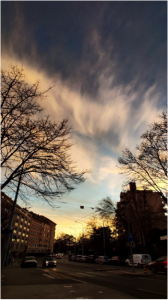 The 24th of February started with a delicious cup of a coffee and a croissant ordered in broken French before trying out the Geneva public transportation system. Apparently, stop-and-go traffic is a global phenomenon, but the view is much nicer when you are stuck in front of the United Nations.

When we arrived at our first organization of the day, the World Health Organization (WHO), we were completely star struck. The Director General, Dr. Tedros Adhanom Ghebreyesus, whose face we had seen a multitude of times in press conferences and news stories, was walking into the organization directly in front of us, with a myriad of suits and cameras in his wake. We barely had time to fully realize what happened before we were ushered into a meeting room with the most lovely view of the Swiss mountains. The WHO had some amazing insightful talks about global health preparedness, human resources for health, non-communicable diseases in low- and middle-income countries, antimicrobial resistance and a careers session (Whew!). After each of these talks, we were provided with some time for questions which was very useful as it gave us an understanding of the global health officials’ positionalities, capacities, plans of action, and possible solutions from their perspectives.

After our long session at the WHO, we headed over to the International Organization for Migration (IOM) office which was only about a few meters from the WHO HQ. Geneva is a relatively small city which made transportation very comfortable and simple as we could travel by foot to most of the organizations. 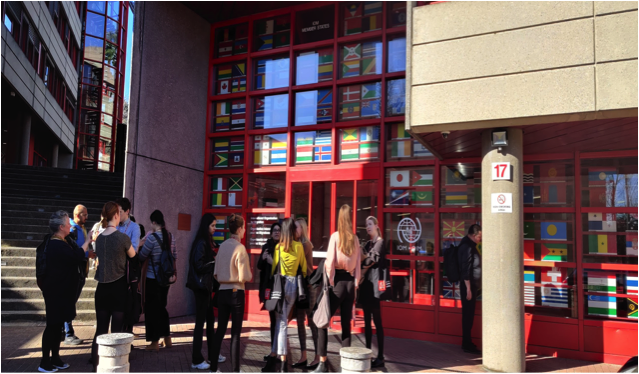 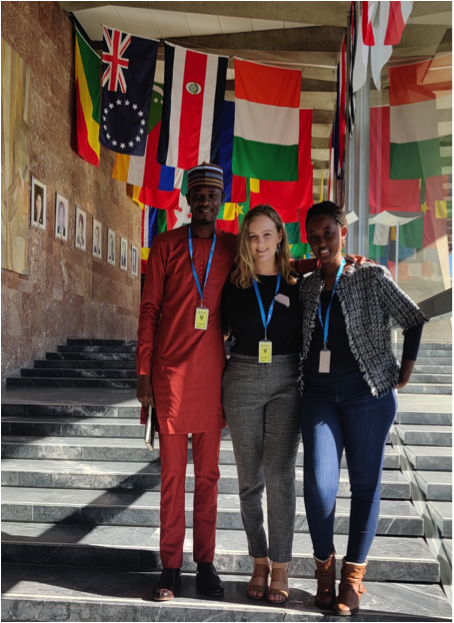 Malik, Kassandra and Matilda (Left to right), on the steps of the WHO. Photo Credit: Shruti Cheriyan

The session at IOM was extremely interesting and insightful. Our session was naturally driven towards COVID-19 as we were in the second month of what would become a pandemic. After the initial presentation, we were split into groups of four representing various international organizations and country ministries and assigned a role to advocate and attempt to control the spread of COVID-19. This was a fascinating exercise because we were expected to make decisions that were ethically ambiguous and see first-hand the consequences of taking different stands during such an unexpected global health crisis. Following the exercise, we were also briefed about IOM’s work and the problems they face working with migrants in the middle of this and other epidemics. 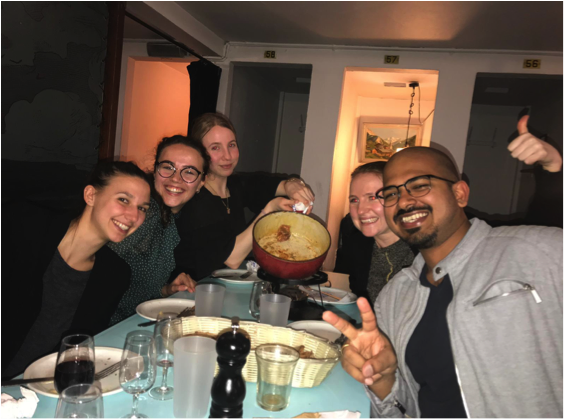 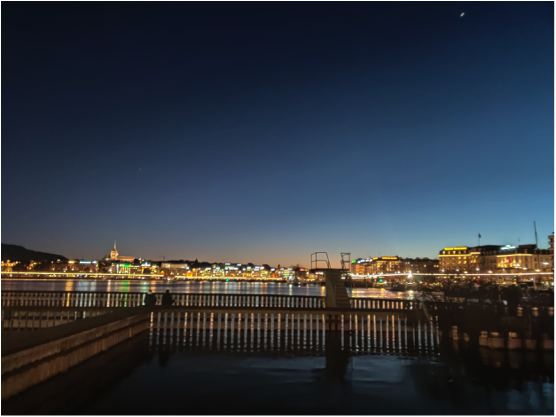 After the IOM session, we all headed over to Buvette des Bains for some cheese fondue. The view from the lakeside restaurant was incredibly stunning and serene. We had a little competition between us to judge which group would finish the largest bowl of cheese we had ever seen the fastest. During the course of the dinner, we got the opportunity to have some amazing conversations which allowed us to get to know each other better. We do not get to do this too often due to our schedules and course work, so this was an excellent way to catch up on each other’s lives. After the dinner, we could not have possibly gone back without scouring the city for some swiss chocolate for ourselves and our friends and families (but mostly for ourselves).

On the 25th of February, we had some free time in the morning before our first session at Medecines Sans Frontieres (MSF). Some of us took the morning to relax while others did some exploring and grabbed some delicious swiss breakfast. Our first session at MSF involved an insightful talk about their Access Campaign initiative. What impacted us the most was the phrase “Medicines shouldn’t be a luxury” and a picture of a ring with a pill on it. We also learned that MSF largely emphasizes ‘change, not charity,’ a philosophical mantra that serves as the foundation for much of their work, including the Access Campaign initiative. 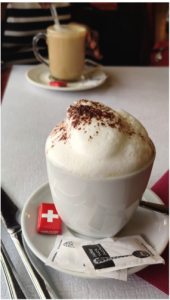 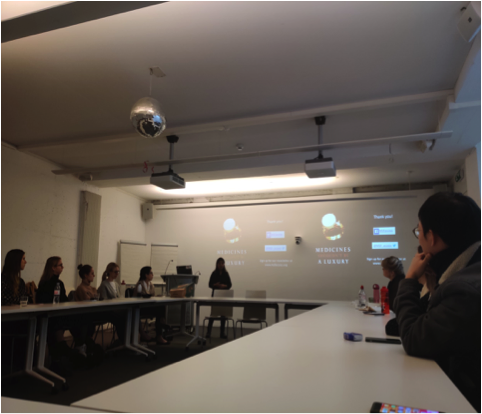 After our session at MSF and a short lunch break, we all headed over to the Global Health campus where we had sessions organized with the Global Fund, Gavi and Unitaid. The first talk was by the Global Fund staff who spoke about their plan of action to end AIDS, Tuberculosis and Malaria and the progress they have made thus far. They also elaborated more about their interventions and partnerships to achieve their 2017-2022 strategy, which aims to maximize their impact against these epidemics, protect and promote equality and rights, mobilize increased resources, and build resilient and sustainable health systems. The second session was by the GAVI alliance who elaborated about their success and ongoing interventions. They also discussed their various donors and partnerships to achieve their goal to create equal access to vaccines. The final session was by Unitaid, where they briefed us about their initiatives and interventions focusing on effectively solving global health problems and their work within low- and middle-income countries. 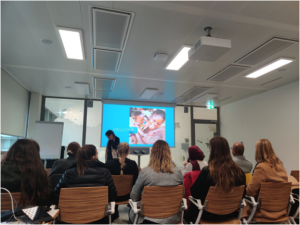 It was interesting to observe how all of these organizations’ work and strategies overlap with each other and their representatives agree – Many times they stated that it is an advantage that they are all working under the same roof because this makes communications and partnerships amongst the organizations easier.

By the end of the second day, it was striking to compare the approaches made by these various organizations. The WHO often serves as the head and hub for all things “Global Health” but is extremely bound by its need to represent a variety of nations. Thus, many emphasize that the WHO is largely normative and technical in existence and tries very hard to not be “political.” MSF, on the other hand, had a completely different approach. They felt that it was their duty to speak up for the people they serve where political institutions and private companies fail to act. Because the majority of funds come from private donations, they do not have to represent the will of a certain entity or state, and thus are able to do things like stage protests in front of pharmaceutical companies who charge high rates for their life saving drugs. Those on the Global Health campus also had a different approach from the former two. They emphasized the need for public-private partnerships in global health and often found success in showing groups like pharmaceutical companies why they should invest in a certain area. It was fascinating to see first-hand that even though all of us have ultimately the same goal – the improved health of the world population – there are multiple different pathways and perspectives to getting there. It makes the choice of which organization or group you align yourself with in the future just that more significant and important. 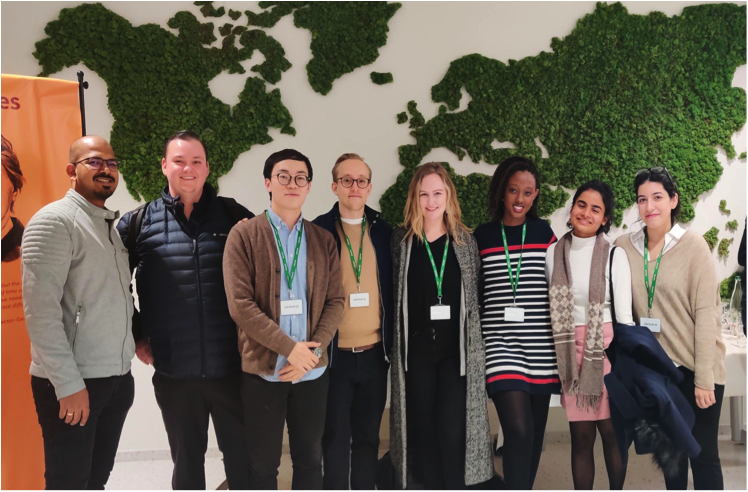 With the completion of all of our sessions, we had a small networking and drinks event organized, where we were able to interact with some of the staff in order to better understand their career paths. At the end of the networking event, we all gathered for one final group photo, though many of us had to leave early to catch their flights

Overall, we needed this break and the city was the perfect location to take one. Geneva rejuvenated our spirits with its bright sunny day, stunning sunsets, vibrant landscapes and delicious food. This trip also made our dreams and aspirations more reachable and reminded us that one day, much like Shruti, some of us would return to the city in another capacity to get even farther past the gate.

Shruti Cheriyan is an M.Sc. Health and International Development student at the London School of Economics and Political Science (LSE). She holds an Honors degree in Economics from the University of Delhi and an M.A. Population Studies degree from the International Institute for Population Sciences (IIPS), Mumbai