As Colombia enters its most important electoral cycle in recent history, right-wing proposals for renewed militarisation are gaining ground on support for the peace process, while the left remains highly divided. In these extreme conditions, there exists a real danger that the peace process could be reversed, writes Tobias Franz (Universidad de los Andes, Bogotá).

There is no doubt that the signing and ratification of the peace deal between the Colombian government and the Revolutionary Armed Forces of Colombia (FARC) represents a historic opportunity to end the internal conflict that has ravaged Colombia for over half a century.

The agreement opens important channels for civil society, social organisations, and marginalised actors to have their say in shaping a peaceful future for Colombia. However, and as some observers have rightly pointed out, the peace deal also helps to entrench Colombia’s current neoliberal model by attracting greater foreign direct investment (FDI) into extractive industries, infrastructure projects, and tourism.

Since its rejection in the 2016 referendum, the deal has polarised ever further Colombia’s already highly divided society. In this situation, where right-wing proposals for renewed militarisation are gaining ground on support for the peace process, Colombians go to the polls for both parliamentary elections (11 March 2018) and presidential elections (27 May 2018) – arguably the country’s most important electoral cycle in recent history.

The Colombian right: the shadow of Uribe and the communist ghost

After eight years in office, including receipt of the Nobel Peace Prize for his part in the peace deal, President Juan Manuel Santos is constitutionally unable to run again. Though his political party, the centre-right Social Party of National Unity (Partido de la U) currently represents the largest group in the House and in the Senate, it is likely to be marginalised in the new parliament. The party has even declined to put forward a presidential candidate given the drastic drop in Santos’ popularity. Other parties linked to the current Santos government have long since jumped ship so as not to go down with his dismal approval ratings.

His original affiliate, the centrist Colombian Liberal Party (Partido Liberal Colombiano) does everything possible to distance itself from the incumbent. But even if their candidate, Santos’ chief peace negotiator Humberto de la Calle, manages to disassociate himself from the current government, his chances of winning on a platform of securing the peace treaty are slim. Other coalition parties, such as the right-wing Radical Change (Cambio Radical), are backing the candidacy of Vargas Lleras, who recently suggested “reviving local security fronts and creating a body of volunteers of citizen security forces“.  This discourse harks back to the parapolitics of the early 2000s, when political leaders supported paramilitary mobilisation. It targets support from the far-right of Colombian society and particularly from supporters of former president Álvaro Uribe.

While Uribe’s political party Democratic Centre (Centro Democrático) is still searching for a candidate willing to do Uribe’s bidding, a variety of right-wing candidates are trying to woo the highly popular former president (who is himself unable to run). These include former Inspector General of Colombia Alejandro Ordóñez (Independent), former senator and defense minister Marta Lucía Ramírez (Conservative Party), and Senator Iván Duque Márquez (Democratic Centre), all of whom oppose the current peace deal with the FARC.

Each attempts to outbid the next through proposals to turn back the clock to Colombia’s past of state-sponsored human rights violations and through the classic Colombian tactic of invoking the communist ghost. Hyping the empty threat of Colombia becoming like Castro’s Cuba or Chavez’ Venezuela are the favoured means of far-right scaremongering. And despite the fact that it is mainly civil-rights activists and community leaders that are being murdered for their efforts to guarantee that the peace agreement is fulfilled and justice achieved, the mainstream narrative focuses on anti-communist fears and the threat of a “gender ideology”.

In spite of a looming shift to the right, many Colombians put their hope in Sergio Fajardo. A professor of mathematics, former mayor of Medellín, and former governor of Antioquia, Fajardo is a candidate of hope that would defend the peace agreement with the FARC. Refusing to wear a tie, always sporting his signature jeans, sleeves rolled up, Fajardo does everything possible to project himself as a man of the people, the real alternative, different from “the same old faces“, and neither Uribe nor Santos.

His Colombia Coalition (Coalición Colombia) featuring leftist Senator Jorge Robledo (Alternative Democratic Pole) and Green Alliance leader Claudia López brings together figureheads and movements that are able to mobilise large parts of the progressive popular vote. Yet, his neoliberal stance on key social and economic issues casts doubts on his commitment to the progressive and structural change that Colombia so desperately needs if it is to achieve real and lasting peace.

In my previous research project on governance reforms and the impact of state-business relations on sub-national development in Colombia, I had the opportunity to interview many of Fajardo’s key allies and former members of his local coalition Citizen’s Commitment (Compromiso Ciudadano). Initially a broad coalition of NGOs, social movements, local business elites, and even the chamber of commerce, the Compromiso aimed to bring real political, social, and economic change to Medellín, a city mostly notorious for violence and inequality.

However, the resulting Fajardo government was dominated by interests of the local business elite. The voices of NGO actors and social movements were marginalised. Unsurprisingly, Fajardo claimed that Medellín’s problems of inequality would be solved not by income redistribution, “without appealing to a discourse of anger or aggression”, but rather through building libraries and metro lines.

The policy focus on mega projects, public-private initiatives for microcredit and insurance, and promotion of the city as a cheap-labour destination for FDI meant that the main beneficiary of Fajardo’s governance formula was big capital.

His close ties to Antioquia’s capitalist firms, such as the country’s largest insurer Sura, leading bank Bancolombia, and the biggest cement producer Argos are well-documented. In interviews, the CEOs of these companies have repeatedly stressed that Fajardo is one of their own, someone “who calls and asks for advice, asks (CEOs) to be part of his government, to form public-private partnerships”. With his political discourse stressing that “the same old faces” were corrupt, Fajardo managed to win municipal and departmental elections. This strategy also seems to be working at the national level, where his popularity has been increasing.

However, he has been reluctant to commit to reforming the crumbling health sector with its privatised “Health Promoting Entities”, to fight for free and equal access to education at all levels, or to end an economic obsession with generating competitiveness through extractive activities and low-wage services. In this sense, he is more of an alternative for Colombia’s oligarchy than for wider society. Some of the main players in Antioquia’s capital have already positioned themselves behind Fajardo, though this support could shift once an Uribista candidate is selected.

Meanwhile, the left wing of Colombia’s polity is highly divided and sectarian. While the now demobilised FARC struggles to be accepted as a legal political party, sparking outrage and protests at nearly every public event, other parties are divided over which presidential candidate to back.

Some regional factions of the Alternative Democratic Pole have recently broken with the central party’s ambition to join Fajardo’s coalition. A growing number of party members and other leftist movements have voiced support for Bogotá’s former mayor, the independent Gustavo Petro. In recent opinion polls, Petro has surpassed Fajardo as the most likely candidate to win the presidential elections. However, much as Colombia’s left would like to believe that Petro could achieve real progressive change, his chances are slim in a country dominated by landed capitalist interests that only want to see the country’s current neoliberal accumulation strategy deepened. In a country where several popular leftist presidential candidates have been assassinated, there are growing fears for Petro’s safety, particularly since a recent attack on his convoy during an election event in the north-eastern town of Cúcuta on the Venezuelan border.

The most crucial elections in Colombia’s recent history are just around the corner, but the electoral panorama offers little reason for hope. Ongoing killings of social leaders by neo-paramilitary groups and a divisive discourse painting every proposal for change as a route into Venezuela-style chaos, there is a real danger that the peace process will be reversed. Progressive sectors, meanwhile, continue to mobilise to keep the agreement alive, to achieve justice, and to bring about reconciliation. These elections will show if their efforts have been worthwhile.

The sad price of this extreme polarisation is the dark shadow that it casts over Colombia’s historic opportunity to achieve peace. 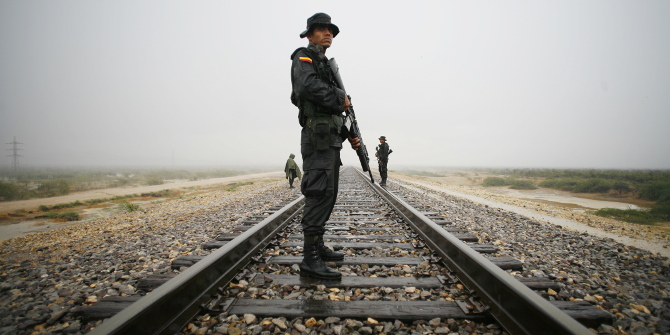