Across Latin America, many impoverished communities rely on income from illicit economies for their survival, yet international development agencies and NGOs have long been reluctant to confront this uncomfortable truth and address its development implications. Drawing on the inaugural issue of LSE’s Journal of Illicit Economies and Development, Allan Gillies (University of Glasgow) looks at what international policy and research communities can do to tackle the threats posed by illicit economies without heaping further harm on marginalised communities.

The Special Session of the United Nations General Assembly on the World Drug Problem in 2016 was called in response to growing dissatisfaction with the international drug-control regime. Prominent amongst the system’s discontents were governments and civil society groups from major areas of global drug production and trafficking in Latin America. They argued that militarised counterdrug policies had failed to stem cocaine flows while simultaneously deepening drug-related violence across the region.

The “war on drugs” had also targeted rural communities that turned to cultivation of coca – the raw, organic ingredient of cocaine – out of poverty rather than greed. But enforcement-based policies, including forced eradication of coca crops, had little effect on the price and availability of cocaine on the streets of North America and Europe. Instead, they only served to inflict further harm on precarious livelihoods. Where official development programmes were ineffective, illicit coca had offered these communities a viable and vital source of income.

Such uncomfortable truths underpin the development dilemmas of illicit economies. From Andean coca growers and teenage drug-runners in neglected barrios to migrant labourers in Colombia’s illegal gold mines, Latin America offers countless examples of impoverished and desperate communities turning to illicit economies for their survival. This frequently occurs in areas where the state is absent or distrusted and where international policy responses and development aid have failed.

For many communities living in grinding poverty, involvement in illicit economic activity can be a “solution” to the very real problems that they face, yet the development sector has failed to engage with the difficult questions implied by this dynamic.

Illicit economies: a matter of law enforcement or development?

The policy area of illicit economies has typically been viewed as a law-and-order or security issue, with development agencies and NGOs ceding ground to law-enforcement and military forces.

Of course, these latter actors are right to highlight the clear dangers to wellbeing posed by illicit activities like the cocaine trade. Beyond the health and social effects of illicit drugs, for example, organised crime groups frequently use violence, exploit vulnerable populations, drive corruption, and provoke failures in governance. In some cases, illicit economies may also be linked to conflict, as armed actors use illicit revenue streams to fund their violent campaigns. As such, the development sector’s typical framing of illicit economic activity as a law-enforcement problem and a serious threat to human development is not without merit.

More prosaic factors have also influenced this stance. Development agencies have been reluctant to engage in bureaucratic battles with their counterparts in the security forces, who view this policy area as their institutional domain. NGOs, meanwhile, are often wary of becoming embroiled in politically sensitive issues like illicit drugs due to concerns about jeopardising relationships with public benefactors and donor agencies. For both types of actor, there is also an inherent difficulty in acknowledging that illicit economic activity may have been more effective than development programmes in lifting some communities out of poverty.

However, vacating responsibility for this issue has had real implications for the communities in question. Although law-enforcement perspectives are needed to address the pernicious effects of illicit economies, they frequently overlook the development aspects of the problem, not least the socio-economic drivers of involvement in illicit activity and the consequences of law-enforcement interventions for vulnerable sectors.

As the international community works towards the United Nations Sustainable Development Goals, actors such as Christian Aid have called for more joined-up thinking between law enforcement and development sectors to understand the multifaceted effects of illicit economies on the world’s poor. Effective policy responses, they point out, must recognise the realities and limited choices inherent to situations of poverty and marginalisation.

Development dilemmas and survival: coca in the Andes

There are many cases in Latin America and beyond that demonstrate the complex relationship between illicit economies and development, but the case of the Andean coca-cocaine economy is amongst the most prominent. Although development programmes have been pursued intermittently, critics argue that the policy response has been overwhelmingly fixated on enforcement measures. In essence, prioritisation of the war on drugs turns the livelihoods of those at the lower-end of the trade into a minor consideration.

Coca growers in Bolivia, Colombia, and Peru, for example, have regularly formed the focus of the war on drugs in the region. Coca in its natural form is relatively harmless and has been used in the Andean region since before the age of the Incas. It continues to have cultural significance for indigenous populations and is legally used by many within the region. But consumption of cocaine has transformed coca into an illicit international commodity.

Growers typically hold small plots, mixing coca with other crops as a fail-safe source of income. The plant’s durability and relatively stable market price makes it an ideal cash crop for remote areas of the rugged Andean mountains, where infrastructure is often lacking. While this price may be high compared to other crops, the vast profits of the cocaine trade are accumulated by organised crime, with growers receiving as little as 0.01 per cent of the final street price. This kind of involvement in the cocaine market is driven by poverty and a lack of viable alternatives, as is demonstrated by the repeated failure of crop-substitution programmes.

Crop-substitution programmes promote adoption of other cash crops with promises of technical and financial support. They have also sometimes been conditioned on total eradication of coca, which implies a significant financial risk for growers. Drug control has been the overriding concern and indicator of success for these projects, rather than community development. While some programmes have had positive effects, a lack of economies of scale, poor infrastructure, and fluctuations in global prices have often hindered a shift towards other commodity crops, leaving farmers with little choice but to return to coca.

Insufficient levels of funding have also provoked the criticism that these programmes are mere window dressing for enforcement efforts. The US has spent billions of dollars waging its war on drugs in Latin America, with resources for militarised enforcement far outstripping those dedicated to development programmes. The US has also pressured the Andean governments into forced eradication of coca crops, either via manual eradication by heavily-armed state security forces or by aerial herbicidal fumigation of presumed-coca plantations. The former has been associated with human rights abuses, whereas the latter has been blamed for environmental destruction and for poisoning food crops and drinking water.

In Colombia, this situation has been complicated by the presence of armed actors. Guerrilla forces and paramilitaries have harnessed lucrative sources of illicit income, such as the drug trade and illegal gold.

In formerly FARC-controlled areas, for example, coca growers would pay a tax on their crop to the de facto guerrilla government. During incursions from paramilitaries and even state security forces, such communities risked censure for their role as supposed FARC collaborators. Operating in the shadows of the illicit economy, these communities are left without protection, as the enforcement approach to their livelihoods puts drug control before poverty reduction and human rights.

In the historically marginalised and impoverished region of Chocó, armed groups have fought for territorial control of trafficking routes and informal, small-scale mechanised gold-mining operations. This dynamic has had devastating effects on local communities, causing violence, internal displacement, and environmental damage. However, it is also true that modest royalties from giving miners access to land have become a means of survival for some in an extremely difficult context. Local people and inward migrants also work as labourers for gold-mining operations, complicating the picture further. Again, poverty and a lack of alternatives fuel involvement in illicit activity, with the state largely absent.

Far from settling the conflict, the Colombian government’s peace settlement with the FARC has resulted in increased violence in Chocó. The remaining armed groups have occupied the void left by the FARC and exploited the same illicit economic opportunities. Doubts remain about the government’s ability to deliver peace and viable economic alternatives, such as sustainable gold mining that could benefit Chocoan communities, and for the meantime regions like Chocó bear the brunt of the conflict.

Towards a new agenda?

So what can the international community do to more effectively tackle the threats posed by illicit economies whilst avoiding further harms to marginalised communities? There are already clear signs of movement towards a new agenda that could answer this crucial question.

The United Nations Development Programme, for example, has highlighted the damaging effects of drug-control policies on human development, while the outcome document of the 2016 UN General Assembly on the World Drug Problem recognised that efforts to tackle illicit drug economies and achieve Sustainable Development Goals were complementary and mutually reinforcing. More tangibly, the Bolivian government – supported by the European Union and the UN Office on Drugs and Crime – has introduced a less confrontational approach to monitoring and controlling coca cultivation. This system of “social control” is designed to prevent diversion of coca into the illicit market while also ensuring that growers retain a base level of subsistence. Alongside this, the German development agency GIZ has been working to improve alternative forms of sustainable agriculture in coca growing areas. This approach takes regional development as the key indicator of success rather than simple reductions in coca cultivation.

A growing research agenda in this area has emerged in conversation with such policy developments. In April 2018, the University of Glasgow, the Global Partnership on Drugs and Development at GIZ, Christian Aid, and SOAS held an international conference focusing on the development implications of illicit economies. The conference brought together academics, policymakers, and representatives of the development sector to discuss different views and experiences, new research, gaps in empirical data, policy responses, and specific barriers to understanding and addressing this controversial issue.

With the collaboration of the LSE International Drug Policy Unit, this ultimately led to the inaugural special issue of the new Journal of Illicit Economies and Development. The development of initiatives involving this kind of cross-sectoral dialogue will be crucial in advancing this new agenda, addressing the uncomfortable truths behind illicit economies, and improving the daily lives of impoverished and marginalised communities in Latin America and beyond.

Dr Allan Gillies is a research fellow at the School of Social and Political Sciences, University of Glasgow, on the ESRC and Newton-Caldas funded project Colombia River Stories. This multi-disciplinary project examines the socio-environmental impacts of illegal gold-mining in Chocó, Colombia, against the background of ongoing peacebuilding efforts. Allan previously held an ESRC Global Challenges Research Fund Fellowship examining the development implications of illicit economies in Bolivia. He served on the Secretariat and Organising Committee of the conference Addressing the Development Implications of Illicit Economies and was a guest editor of the inaugural issue of the Journal of Illicit Economies and Development (LSE Press). 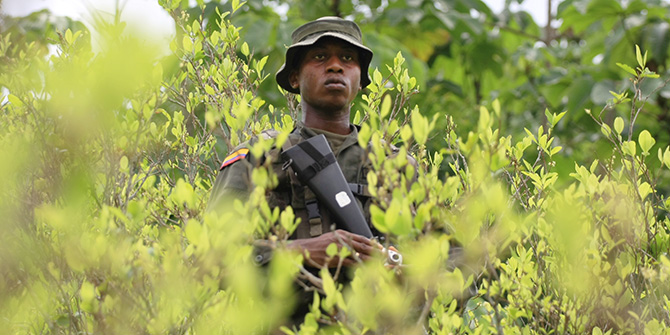