LSE Archivist Sue Donnelly introduces the early years of LSE founder Sidney Webb. He grew up in the West End and became a broker, entered the civil service and studied for the bar before joining the Fabian Society.

Deft and ingenious in the logical application of argument he might be, but the main quality was burning conviction and absolute sincerity. To a girl accustomed to the superior didactic manner, the scholarly hesitation, and the careful non-self-committal of a Cambridge lecturer, this fire of sincerity was something astounding. Moreover there was humour and racy originality in the turn of some of the lecturer’s phrases, pointing to a very deep streak of the quality which should be common to all men, but which has been lost to the race in the process of civilisation – and that is of humanness.
Emma Brooke, Transition, 1895

In 1895 the Fabian and feminist writer Emma Brooke published her novel Transition in which the heroine must choose between two political ideals – that of the dashing, foreign anarchist and the “gas and water socialist” Philip Sherridan, closely based on Sidney Webb. Her choice of the anarchist is one she later regrets but her pen portrait of Philip (Sidney Webb) is an antidote to the common image of Sidney as a dull and grey man of facts rather than inspiration.

Sidney Webb was born on the 13 July 1859 in Cranbourne Street, just off Leicester Square, in the heart of the West End.  The Webbs had a comfortable income derived mainly from the hairdressing and toiletry supply business established by his mother, Elizabeth, prior to her marriage. Charles Webb, who is variously described as an accountant, hairdresser and perfumer, was much interested in public life – he was a sergeant in the Queen’s Westminster Rifle Volunteers, a vestryman and a poor law guardian.

I have never met a more gentle, conscientious and thoroughly likeable pair in my life. It was largely due to them that I can also say that I never met a man who combined your extraordinary ability with your unique simplicity and integrity of character.

The Webbs had an annual income of around £500 per year – enough for a comfortable life for Sidney, his brother Charles and sister Ada – but not so large for complete security.  Their home off Charing Cross Road was close to the slums of Covent Garden and Clare Market and Sidney would have been aware of how precarious existence could be for many families. However the income was enough to ensure the children had a good education and in 1871 the brothers were sent to school on the outskirts of Neuchatel in Switzerland and then on to Wismar on the Baltic in Germany. On their return in 1875 Sidney was able to speak good French and German.

Sidney swiftly obtained employment in a colonial broker’s office where he was offered a partnership but chose instead to enter the Civil Service with posts at the War Office, Inland Revenue and in 1881 as a First Division Clerk at the Colonial Office with an income of £250. Many young men with a secure (and easy) job on comfortable pay would have counted their blessings and settled into an easy life. For Sidney it was an opportunity to continue his education and join the intellectual life of the capital.

Sidney attended university extension classes including those at at the City of London College and Birkbeck Literary and Scientific Institution, where he was secretary of a committee campaigning for student representation.  He found time to study for the bar and in 1883 won a Whewell Scholarship in international law awarded by Trinity College, Cambridge. Unfortunately Sidney did not take up the scholarship as he needed to continue his duties at the Colonial Office and was unable to meet the condition that he must reside in the College – although he made a persuasive case that the Master and Fellows had the discretionary power to waive the requirement. The incident probably explains much about Sidney’s attitude to higher education and the emphasis in the early years of LSE in supporting working students with a range of evening classes.

Social life revolved around numerous debating societies. One was the Zetetical Society of Conduit Street, whose “primary object [is] to search for truth in all matters affecting the interests of the human race”. Five of the thirteen members went on to be active members of the Fabian Society and here in 1879 Sidney met G Bernard Shaw for the first time, beginning a friendship which would last over 60 years. In 1949 Shaw recalled: “Quite the wisest thing I ever did was to force my friendship on him and to keep it; for from that time I was not merely a futile Shaw, but a committee of Webb and Shaw.”

In 1884 the Fabian Society emerged from an earlier organisation The Fellowship of the New Life which had been focussed on transforming society through personal example. The Fabian Society focussed on social and political change through gradual reformation. Sidney first spoke at the Fabian Society in March 1885 and he was elected a member in May 1885. Soon Sidney and Shaw were prolific writers of Fabian tracts including Facts for Socialists and Facts for Londoners.

Find out more about Beatrice and Sidney Webb in LSE’s digital archive, Webbs on the Web

Posted In: Beatrice and Sidney Webb | Our first years | People 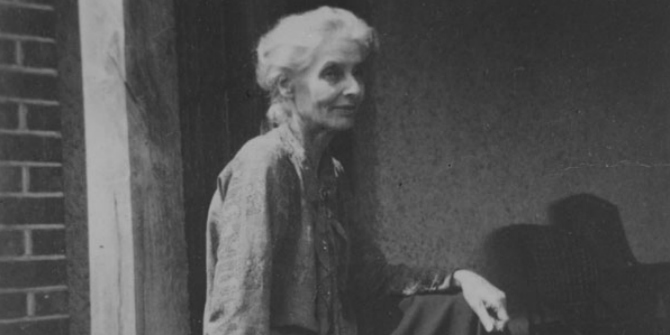