Laos experienced some of the worst bombings of the Cold War era, and yet this legacy of violence often goes unrecognised in the international realm. In this article, Juliette O’Connor, explores this period of Laotian history and examines the trauma of unexploded ordnances that are still terrorising the nation today.

10 years of US air surveillance missions and bombings between 1964-1973 have given Laos the tragic title of the most heavily bombed country (per head of population) in the history of warfare. The equivalent of a planeload of bombs were dropped every 8 minutes, 24-hours a day, for 9 years. Over two million tonnes of ordnance were released by US war planes in Laos, equalling 0.833 tonnes for every person in the country.

The bombings formed part of the US secret war in support of the Royal Lao Government, and against the Pathet Lao, a communist political movement in Laos. The Pathet Lao were closely affiliated to Vietnamese communists, which caused alarm within the American government, resulting in the monitoring and bombing of Pathet Lao strongholds. The Ho Chi Minh trail, a key supply route for the Vietcong and North Vietnamese encroachment into South Vietnam, ran along Laos’s eastern border. The intermingling of Vietnamese and Laotian civil wars made Laos a key piece of the puzzle for American efforts to contain communism in Southeast Asia. The US spent nine years bombing Laos to prevent a domino effect in the country. The bombings destroyed thousands of villages and displaced hundreds of thousands of Lao civilians, notably along the eastern border with Vietnam. In 1975, despite ten years of incessant American bombing, the Pathet Lao came to power, establishing the Lao People’s Democratic Republic. 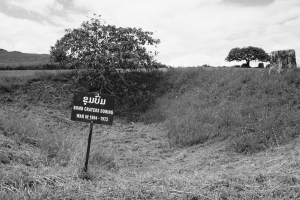 Up to a third of bombs dropped in Laos from 1964-1973 did not explode, leaving the country contaminated with vast quantities of unexploded ordnance (UXO). These munitions failed to detonate upon impact for a variety of reasons. Some bombs were faulty, or dropped from too low an altitude, others fused incorrectly. If walked upon, hit or heated, these devices can explode, severely injuring or killing their victim. The legacies of this war thus remain visible to this day. Driving through the Lao People’s Democratic Republic, tourists, myself included, are constantly reminded of this dark part of Laotian history. The COPE Centre in Vientiane, Laos’s capital, broaches the topic from a medical perspective. It specialises in prosthetics for those who lose limbs to bombs. Patients appear weekly at the centre to have prosthetics fitted. COPE’s museum is a sobering chronicle of life amid UXO. 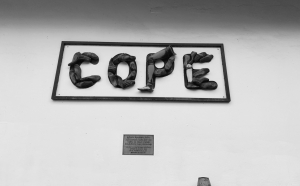 The realities of living alongside UXO are that, despite the risks, families are forced to use contaminated land out of economic necessity and food insecurity. A recent survey from Mines Advisory Group (MAG), a British NGO, suggests that 80% of people in areas with cluster bombs still use the farmland despite knowing or suspecting it to be contaminated with deadly explosives. Two-thirds of the rural population are either food insecure, or living on the edge of food security, living below the poverty line of US $1.25 a day. Agriculture remains the primary form of subsistence. Leaving a field unploughed could mean further food scarcity or starvation.

The MAG Centre in Luang Prabang, Laos’s ancient capital, offers another vivid reminder of the issue. This NGO focuses on demining and bomb disposal. However, this work is not an easy task. MAG signs across Xieng Khouang (Laos’s second most heavily-bombed province) point to the magnitude of the problem. Land must be cleared of the UXO that remains so that it be safely farmed and lived upon, yet it can take hours to remove just one bomb. All across the country travellers are witnesses to these ongoing legacies. 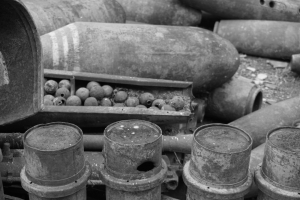 From 1975 to 2019, only 2% of the UXO in Laos were cleared. Problems of funding and organisation lay at the heart of the issue. Sadly, Laos lacks an effective consolidated system for gathering and managing information on ordinance removal and casualties. Although an official Laotian overseer, the National Regulatory Agency (NRA), was created in 2004 to manage UXO clearance in the country, numerous difficulties remain. Data is only gathered in areas where demining agencies, such as UXO Lao and MAG, operate. Collecting data from remote rural areas remains difficult. The mechanism for sorting this data and managing it at a national level continues to be elusive. The NRA control this process. Misrun and bureaucratic, it struggles to offer accurate information, hampering the demining process in the first instance. The NRA needs to clean up its act to effectively tackle clearing ordnances.

Bureaucracy is also heavily involved when it comes to NGOs. The Laotian state, governed by a one-party communist government, controls which organisations are permitted to work in Laos and which are not. It consigns the perimeter of operations and monitors the international funding received. The state carefully oversees organisations, sometimes taking years to approve permits, further hampering efforts. A second difficulty is that a plethora of organisations compete in Laos. MAG and the national NRA wrestle with other organisations, including the Halo Trust, Norwegian People’s Aid and smaller NGOs such as Humanity & Inclusion. Rather than uniting their efforts, they fight over funding, recruitment of aid workers, and to be given a portion of land to clear. Coordination between government, local authorities, and NGOs often proves difficult. This comes at a cost. Although numbers have diminished, civilians continue to die every year as a result of a war they had no part in. In-fighting and heavy bureaucracy need to be stemmed if land in Laos is to be cleared. 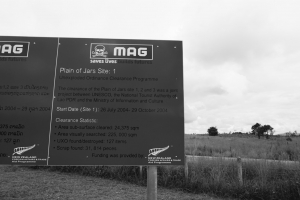 Another obstacle is the difficulties faced by NGOs in accessing funding. There are several reasons for this. Firstly, the issue of UXO clearance in Laos is endless. At this rate it would take more than four centuries to clear Laos of ordnance. Donors are often not interested in projects guided by such long-term aims. Related to this, ordnance clearance does not provide very marketable results. It is not like vaccines. $1 does not save one child’s life. Investing in medical or agricultural aid delivers more powerful images in the minds of business-savvy donors and PR-driven investors. Finally, UXO clearance is costly. A bomb that cost $3 to manufacture and drop will cost Laos up to $1,000 to locate and destroy. In a world where fundraising is fundamental, such complexities are overlooked. Sadly, Laos’s UXO problem is often ignored.

Where does the blame lie? It has been estimated that the US spent $13.3 million per day for nine years bombing Laos. Yet, between 1993 and 2016, the US contributed an average of $4.9 million per year on UXO clearance in Laos. Holding the US accountable for the devastating war it raged in Laos is essential. Located in Washington, an NGO called Legacies of War has been working tirelessly to raise awareness and increase financial support for clearance of UXO. It has brought greater attention to the plight of Laos and played a key role in President Obama’s visit to Laos in 2016, the first visit by an American President. His speech marked a historic turning point. Acknowledging America’s role in the civil war, he promised a $90 million package to help clear UXO. And indeed, millions have been invested over the last three years into clearance programmes. However, demining remains a slow and laborious process which requires sustained engagement and investment on the part of the United States. The latest administration has not lived up to the promises of the last and Laos has once again been relegated to the bottom of America’s list of concerns.

Juliette O’Connor is a MSc student in International and World History at the London School of Economics. Her research focuses on post-war reconstruction and the role of NGOs in Laos. She holds a BSc in International Relations and History from LSE.

All photo credits to Juliette O’Connor.

Seoul – Beijing Relations from the Cold War to THAAD deployment

“Ulster Will Fight and Ulster Will be Right”: The DUP and the Zero-Sum Game of Constitutional Politics