In recent years, tensions in the South China Sea have dominated security concerns in the Pacific. In this piece, Tenny Kristiana discusses threats in the East China Sea that have slowly but surely been developing in the shadow of its southern counterpart. With close proximity to Mainland China, North and South Korea and Taiwan, Okinawa’s strategic importance has only grown since the Second World War. However, Kristiana argues, for Japan to truly exert its dominance in East Asian waters, it must stop relying on the US.

In April 2020 the Chinese aircraft carrier Liaoning and five other Chinese warships sailed north to the seas between Okinawa’s main island and Miyako Island for the first time in the twenty-first century. Even though the Japanese Defence Ministry assured its populace that none of the warships had crossed Japanese territorial waters, the probability of the aircraft carrier being seen again in the area remains high.

To understand why Okinawa’s military base is crucial for the Japan-US Security Alliance, one must look back to the end of US occupation in Japan. In 1952, Japan’s sovereignty was restored following the San Francisco Peace Treaty. However, the Ryukyu islands (including Okinawa) continued to remain under US military control. The declassified documents of the US Joint Chiefs of Staff revealed that American military high command sought new sites for the creation of military bases all over the world. Military bases were categorised in four ranks: primary, secondary, subsidiary, and minor base areas, with Okinawa bracketed in the secondary level. Secondary base areas were meant to protect and provide access to primary bases. However, within months, this decision was overturned. A subsequent report, dated October 1945, stated “the Ryukyus … be transferred from the secondary to the primary base area category”. The primary base was assumed to “be under United States sovereignty or exclusively under United States strategic control”. An old map from Akio Watanabe’s book can explain this shift in importance. The map, as seen below, highlighted the strategic position of Okinawa which allowed easy access to East Asian and Southeast Asian countries, and to other American territories such as Guam. 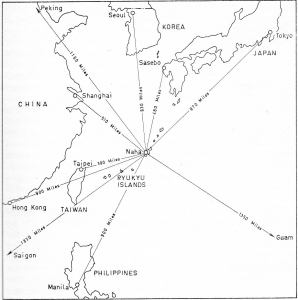 In 1950, the US high command fully intended to propose sole trusteeship for Okinawa. Top-level American military leaders regularly paid visits to the island’s bases from 1949 to 1951 to assess the change in status of American forces stationed on the Japanese mainland after the adoption of the Peace Treaty. However, due to the Japanese government’s intervention in 1951 and their appeal to Dulles, adviser of the State Department who drafted the Peace Treaty, the US relinquished the proposal of trusteeship but continued to retain its control over the Ryukyu islands.

During the Cold War, Japan was a major base for US nuclear warfare in Asia.  Nineteen different types of nuclear weapons were placed in Okinawa. The US government also invested heavily to build permanent military installations on the island. By the early 1960s, the China-Taiwan and Laos crisis put the US Indo-Pacific Command (PACOM) on high alert. Okinawa was part of the US’ nuclear war plan, the  Single Integrated Operational Plan (SIOP). Responding to communist aggression in Southeast Asia, the US deployed three naval task groups, including the two nuclear strike carriers USS Lexington (CVA-16) and USS Coral Sea (CVA-43), in the South China Sea. Subsequently, the military base in Okinawa greatly aided in American and Japanese response during the Korean War, the Taiwan Strait conflicts, and the Vietnam War.

The Japan Defence White Papers, published in the 1970s, stressed Japanese concerns over China’s growing military prowess and the tense situation in the Korean Peninsula. They underscored the importance of maintaining US military presence in Okinawa and in 1972, the US government agreed to return the administrative right of Okinawa to Japan in exchange for economic sanctions and trade deals. However, the Treaty of Mutual Cooperation and Security signed in 1960 stated that US forces in Japan will defend the region against attacks, thus allowing America to maintain a military presence in Okinawa despite handing over its administration.

Japan’s most powerful neighbour, China, has always been involved in the international negotiations on American presence in Okinawa. During the Cold War era, China’s support toward the military bases in Okinawa changed depending on its own political agenda. Initially the Chinese government supported the Okinawa reversion, and aligned itself with the Soviet agenda of removal of military bases from Okinawa, fostering friendly relations with Japan in order to further spread communist ideology. Peking worked with Moscow in offering to return the Shikotan and Habomai islands to Tokyo if Washington returned Okinawa. When the Okinawa reversion took place, Peking criticised it as a “dirty deal” and a “despicable fraud”. However, under President Richard Nixon, the US managed to get Chinese “approval” by exploiting China’s fear of a revival of Japanese militarism. Henry Kissinger, the architect of Nixon era diplomacy, argued that as long as China was more fearful of Soviet Union than the US, China’s self-interest would push it to cooperate with the US.

However, the Okinawa reversion did leave one problem for China – the inclusion of the Diaoyu or Senkaku islands in the area of reversion violated Chinese territory and sovereignty. The dispute over Senkaku was used as a justification by the Japanese government to accept the US military presence in Okinawa by emphasizing the idea of a Chinese “threat” to Japan’s defence. Currently, 70 percent (over 25,000) of the total US troops stationed in Japan are in Okinawa. However, such a large number of troops is not enough to deter China and decrease tension in the East China Sea.

For decades, there was minimal interaction between Chinese and Japanese vessels and aircrafts. However, in the past few years, especially after Tokyo purchased the islands in 2012, this has changed. In 2012, around 68 Chinese vessels penetrated Japanese territory. This continued in 2014 with 88 vessels, 86 vessels in 2015, and 121 in 2016. This demonstrates Chinese intention to exercise administrative control in the East China waters without having it escalate into military conflict. Besides this intrusion, Beijing has also regularly sent its aircrafts for surveillance and combat air patrols in the area. Furthermore, in 2013 Beijing announced its Air Defence Identification Zone (ADIZ) in the East China Sea. Beijing has been attempting to  strengthen its de facto control without provoking war with Japan, ultimately undermining Japan’s position.

In 2012, 2014, and 2017 the US government issued strong statements, reaffirming their claim on the Senkaku Islands under the US-Japan Security Treaty. However, the US government’s statement is not enough to avoid conflict in Senkaku. This is proven by continued aggression in the region. In view of China’s provocation in the South and East China Sea, the US and Japanese governments must increase security in the area by maximizing military presence in Okinawa. Moreover, a strengthened base will also allow for efficient monitoring of both Seas. The breach of Okinawa’s coast by Chinese aircraft is not only a warning sign for Washington, but also a wake-up call for Tokyo not to rely solely on US troops as a deterrent.

In a referendum early last year (2019), 70% of Okinawa’s residents voted against the construction of a new base. The Abe administration, however, decided to continue the relocation, ignoring the voice of Okinawan people; arguably, this is a bold move, prioritising Japanese security over democratic demands. Sheila Smith describes the US-Japan alliance as the “sword and shield” where Japan serves as the shield, concerning itself with immediate defence of its border, and the US as the sword, responsible for offensive operations to eliminate threats and fight beyond Japan’s borders. However, the continued incursion of China shows that this is no longer an effective policy. It is the time to change the alliance’s “sword and shield” approach by expanding Japanese involvement in Okinawa through an increase of Japanese Self Defence Forces and defence equipment in the region. By strengthening Japanese security, Tokyo would signal to Beijing that it is serious about defending its territory and maintaining the balance of power in the East China Sea.

Tenny Kristiana is a member of Pacific Forum’s Young Leaders Program. She has achieved her second master’s degree in International Relations from Graduate School of Asia-Pacific Studies, Waseda University. Previously she studied at the University of Indonesia, majoring in Japanese Studies.

Cover Image: The U.S. aircraft carrier Bunker Hill burns after being struck by two Japanese kamikaze aircraft, May 11, 1945, in the waters between Okinawa and Kyushu, Japan. US National Archives