What can we learn from honeybees? In Honeybee Democracy Thomas D. Seeley brings together decades of work on the “democratic house-hunting process” of honeybees, suggesting that an emphasis on sharing and group support are key strategies that humans can benefit from too. Philippine Reimpell is impressed by both the enthusiastic arguments and the beautifully presented illustrations. 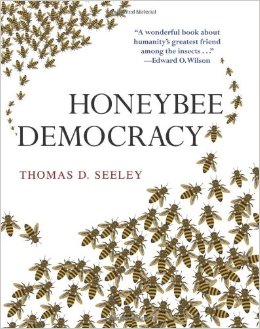 Cornell University Professor Thomas D. Seeley opens Honeybee Democracy with a passionate overview of exactly how inspirationally democratic these insects are. For bees, the quality of their home is linked to their survival, thus they are genetically programmed to recognize nest sites best suited to the swarm’s needs. Prospective homes in the vicinity of the mother colony are surveyed by up to 300 ‘scout bees’, who then perform the famous waggle-dance to report the distance, direction and quality of the sites to their fellow workers. Scout bees are programmed to stop dancing after a determined period of time regardless of the quality of their proposal and the level of support, ensuring that the best site is chosen and avoiding the equilibrium of support being tipped towards a mediocre choice that entered the race early.

Seeley invites us to think of a swarm of bees as a single organism rather than as tens of thousands of individual bees. He draws an analogy between neurons in the human brain and individual bees, comparing the basic decision-making process in primate brains with that of an entire swarm. Working as a swarm allows the bees to exceed their individual capacity to gather and process a wide range of information. It is for this reason that Seeley redits the bees for being ‘better’ decision-makers than humans and argues that they practice a ‘pure form of democracy’ as they do not need to rely on heuristics and have a shared confidence in the strength of their decisions.

Bees are not infallible however, and it could be argued that while the individual bee makes a rational choice on the information available to it when it chooses to promote a site or not, the swarm as a whole takes a short-cut and bases its final choice on approximation, rather than consensus and ‘pure democracy’ amongst the scout bees. And in both the bee colony and in examples of human democracy, the process of decision and deliberation is undertaken only by a select few (by scout bees or by those citizens who care enough to participate). This means that the deliberation process only includes those bees who have been actively involved in the house-hunting process, which is a mere 3% of the swarm population. It is perhaps more appropriate to consider the scout bees as a highly informed elite, who have not been democratically elected but who make decisions for the entire swarm. For bees, this may not lead to problems of representation as there really is just one common public good: not dying and succeeding in passing on genes. Some may argue that the same goals apply to humans in the most general sense, although we tend to have a more nuanced idea of what social welfare is and how it can be achieved.

But rather than getting caught up in the details about the analogy between social and natural behaviour one cannot help but be inspired by the beauty of Seeley’s hypothesis-driven experimental work. The book is beautifully presented with illustrations, photographs, charts and anecdotes, and succeeds in making a whole field of investigation accessible to the non-specialist. Any scepticism about the relevance of what at first appears to be a rather niche topic quickly disappears as one is swept away by Thomas Seeley’s enthusiasm for a subject that is clearly his passion.

This review was originally published on the LSE British Politics and Policy blog on 26th December 2010.

Philippine Reimpell is currently working at the BBC World Service Trust. Her work deals with the impact of community radio on governance in Sierra Leone, Angola and Tanzania. She previously worked as a research officer on the Sensitive Technologies and European Public Ethics project in the Methodology Institute at LSE. She has degrees in molecular biology, global politics and quantitative research methods for political science (the latter two from LSE). Read more reviews by Philippine.

Posted In: Contributions from LSE Alumni | Philosophy and Religion | Sociology/Anthropology