John Tirman has written a sweeping and critical account of how the US military has treated civilians in its foreign wars and how the American public has countenanced brutality in its name. The Death of Others is a far-reaching, ambitious, and provocative book, as reviewed by Avery Hancock. 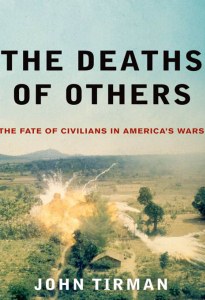 The Deaths of Others: The Fate of Civilians in America’s Civil Wars. John Tirman. Oxford University Press. 2011.

The National Mall in Washington, D.C. is littered with memorials honouring America’s war dead: 30,000 in Korea, 58,000 in Vietnam, and the hundreds of thousands killed in the World Wars. But among the statues and plaques there is no reference to the people these soldiers were meant to protect or liberate: not the three million people who perished in the Korean War, nor the millions of Vietnamese killed or wounded in the 1960s and ‘70s. In The Deaths of Others, John Tirman sets out to uncover why Americans appear to be “uniquely indifferent” to non-American victims of war, taking the reader back to the time of the country’s founding and covering all the way up to the recent conflicts in Iraq and Afghanistan.

Examining America’s experience of violence in foreign wars has received scant attention compared to the interest social scientists and historians have in explaining violence within American society, for example school shootings and the easy access to firearms. To start, Tirman takes us back to the Puritans and the “frontier myth” that Americans today can’t seem to shake. It was the first settlers who, guided by Providence, conquered the wilderness and forged a “city on the hill” civilisation that would inspire the rest of the world.

But of course this was a bloody, genocidal business complete with racist depictions of the depraved ‘other’, the native American, and an ideological vision of violence as a necessary and purifying force. Tirman argues that this legacy explains both America’s penchant for foreign military action and the indifference of its people to foreign losses or collateral damage, both of which carry over to today.

In just under four hundred pages The Deaths of Others attempts to weave this thread of frontier violence through two and a half centuries of American wars.  When the frontier physically ‘closed’ after the successful, violent expansion of the United States to the Pacific, it found expression in other theatres. The brutal repression of rebellion in the Philippines (ceded to the US after the Spanish-American war) in which half a million Filipinos were killed, along with invasions in Nicaragua, the Dominican Republic and Haiti in the early 1900’s, represented civilising missions for an emerging military power, one that sought imperial powers and influence without actually holding colonies.

America’s reasons for entering the two World Wars do not fit so nicely into Tirman’s schema; he focuses instead on the US’ indiscriminate bombing of civilians in Japanese and German cities as proof that Americans had dehumanised the enemy. As the Cold War heats up, the narrative begins to hang better. After China is ‘lost’ to the communists in 1948, Korea and then Vietnam becomes the frontier of the Cold War. After 1989 we see the existential threat posed by communism transformed into an Arab and Islamist threat that again is portrayed as threatening Americans’ way of life, leading the country into war with Iraq and Afghanistan.

The first half of The Deaths of Others skims so quickly over the events and characters which have shaped American foreign policy (The Bay of Pigs, McCarthyism, Eisenhower, Reagan,  even 9/11) that it seems a bit textbook. And at times its catalogues of American ‘wrongs’ will be familiar from the writings of Noam Chomsky and Howard Zinn. But the author’s insight into the Korean war (particularly the US’ suppression of dissent in South Korea) is refreshing, and the discussion of three well-known atrocities (No Gun Ri in Korea, My Lai in Vietnam and Haditha in Iraq) sheds valuable light on how the US military is adept sweeping civilian massacres under the carpet, with tacit support from the public.  We learn, for example, that body counts were used as markers to assess war’s progress in both Korea and Vietnam and that soldiers in Iraq have been ordered to kill all military-age men in a number of skirmishes. But frustratingly, the majority of the book’s pages are concerned with why the US has entered into foreign wars rather than the promised question of why (and indeed if) the American public is more tolerant of inflicting violence in its name than others.

For each conflict covered, Tirman tries to reveal the sentiment of the American public toward the loss of foreign lives by analysing opinion polls, describing how each war was depicted in popular culture, and highlighting the wars’ treatment in the mainstream press. None of these methods are exact sciences of course, but a pattern emerges. After an initial ‘rally around the flag’ effect, support for foreign wars declines, particularly as casualties mount on the American side. Perhaps unsurprisingly, the loss of American soldiers is cited as a reason for the US to disengage from each war more often than considerations of the losses suffered by, for example, South Koreans or Iraqis, which seems to hardly figure in public consciousness. Even the protests against the Vietnam War were largely silent on the war’s effect on the average Vietnamese. Instead the author finds there is an overwhelming tendency to ‘blame the enemy’ for dragging Americans into foreign quagmires.
This phenomenon is especially visible in Iraq, where American soldiers and citizens have portrayed the Iraqi people as ‘ungrateful’ for US military action that has claimed the lives of over 100,000 civilians. General Tommy Franks’ famous assertion “We don’t do body counts” has been reflected in media coverage; at the outset of the war in 2003 only 73 of 18,000 news stories on the major networks mentioned Iraqi casualties. By 2008 any coverage of the Iraq War had dropped to 3 per cent, as the public increasingly favoured pulling out of the country, regardless of the state the country would be left in. The high levels of civilian abuse at the hands of US soldiers, of the kind exhibited at Haditha, seems to correspond with the perception that all Iraqis are collectively responsible for terrorism and insurgency directed at American troops.

How much this brand of ethnocentrism is unique to the US is hard to tell. Studying the attitudes of the British public before and during the war and analysing press coverage in the UK, for example, may have shone some light on the issue. In fact, for a book that is so critical of “American exceptionalism”, there is virtually no international comparison, either contemporary or historical. But overall the reader is left with the sensation that while all great military powers may have been guilty of savagery and indiscriminate treatment of civilians the American experience of war cannot be understood in isolation from a national identity bound up in redemptive violence.

The Deaths of Others is a far-reaching, ambitious book that will be enjoyed by students and anyone else interested in US politics, foreign policy, military history and current events in Iraq and Afghanistan. It leaves the reader wanting more, but that is surely the mark of a provocative and important question.

This review was first published on the LSE British Politics and Policy blog on 5th February 2012.

Avery Hancock works for the United Nations in South Sudan. Prior to this, Avery was a member of the LSE PPG from January 2010. She holds an MSc in Global Politics from the London School of Economics and a BA in Political Science from Boston College in Massachusetts. Before joining PPG Avery worked as a Policy and Advocacy Officer for International Rescue Committee UK- the London hub of the global humanitarian and development agency- with the aim of influencing humanitarian policy within the UK Government, the EU, and the UN.