Page One explores journalism’s big shake-up and takes on the cause of reuniting journalism with its true civic purpose. After reading this collection of essays, Cheryl Brumley reflects that there remains not enough consensus, nor enough collaboration between all constituents of the media world to save itself from slipping further into untenable business practices.

A US army private leaks nearly a quarter of a million classified diplomatic cables to an anti-secrecy organisation run by a white-haired idealist. Five of the world’s top newspapers wade through the heaps of documents to choose the most newsworthy and to weed out the ones that put lives and careers at risk. This new kid on the media block answerable to only to one man as it released not its first but certaintly its most controversial waves of leaks, would shake up the world of journalism and change it forever.

Perhaps. But the story of how journalism was changed indelibly is also perhaps a little less sexy, a bit more familiar, and goes something like this: A regular person sits at a commonplace machine, connected to a global network which allows them to surf, blog, tweet, share, post, like, upload, download, pin, link, hack, tag, and stream information at a dizzying speed. This person, the new media consumer and not to mention, contributor, changed journalism forever.

Many authors contributing to the collection of essays in Page One revisit the Wikileaks saga and the internet revolution as a means to identify the exact change journalism has undergone over the past few years in hopes that these episodes will aid in charting its future course. One obvious advantage of a book like Page One is that it calls for contributions from well, journalists. The essays themselves stand as testament to the importance of professional journalistic writing at a time when it is most under threat. When a chapter failed to captivate or prove its relevance, it was often the result of its odd placement in a book with so many other engaging parts.

Page One picks up where the documentary of the same name left off. The film followed the New York Times for a year during one of the biggest shake-ups it has ever faced. The title makes reference to the daily cover of their printed edition, which came to represent the rigid hierarchy and prestige in journalism which is losing relevance in the digital age. Page One the book further explores journalism’s big shake-up and also takes on the cause of reuniting journalism with its true civic purpose.

Former reporter Jenny 8 Lee is a refreshing voice amidst the doom and gloom. Jenny talks about how she stared at an archived copy of page one of the first edition of the New-York Daily Times, as it was then called, and realised it was essentially in blog format. Her story about ‘How the NYT learned to stop worrying and love the blog’ speaks for accepting the changes technology brings whilst anchoring oneself in core values. This sounds easy in theory but every subsequent chapter struggles with maintaining this very balance.

Journalist Kelly McBride also found in the Wikileaks saga reassurance that even rogue organisations need partners in papers. The sheer volume of cables meant it required professional sifters, editors and narrators. The Bradley Manning leaks turned the industry on its head. That is undisputed. But rather than asking “What is Wikileaks?” she claims the real question is “What is journalism these days?” The answer through the centuries should always remain the same. McBride reiterates that to move from mere”social network” to an organisation with “true democratic impact”, Wikileaks had to seek the cooperation of journalists. If the organisation shunned this cooperation altogether, as they did in the past, indeed they would have been remained a portal for “agenda driven document dumpers”. Journalism gives context by curating the right information and putting it into the right hands. Again, its civic values will be its only saving grace in the move to digital.

The book then moves onto business models and the way we might think about journalism’s place in an overwhelming world of choice. Whereas the first section set the scene and the tone for the rest of the book, the broader appeal it offered certainly doesn’t apply to the remainder. The latter two sections move the Page One into a serious reflection on who should pay for journalism and this brings in the contributions of media heavyweights. Here we see champion of open access and Editor in chief of The Guardian, Alan Rusbridger, challenged as to whether he is espousing a sort of religion rather than promoting a realistic business model. An evangelist Rusbridger may be but his opinion is clearly a minority in the business and one that he remains inspiringly adamant. He returns to the words of Guardian editor C.P. Scott: “The world is shrinking. Space is every day being bridged. What a change for the world! What a chance for the newspaper!” These words were written in 1921.

The latter sections also contain a share of disappointing essays. There is an argument for the importance and the still growing popularity of radio when print subscriptions are diminishing. The internet is driving innovation in this area and the introduction of podcasts, which means independent broadcasting no longer means one has to illegally pirate the radio waves, is certainly deserving of attention. One chapter did not give this theme enough justice and certainly not one chapter which loses the reader in its numerous statistics.

A transcript of Hillary Clinton in a Select Committee session on Al Jazeera is also featured. When reading the book cover to cover, this sits incongruously to the carefully constructed prose (or edited transcripts) that appear throughout the book. Her speech is less than fluid and actually distracted from the very important point she was trying to make – that evolution of the media must run alongside the inclusion of contributions from non-Western sources.

Overall, the book shows, whether intentionally or not, that journalists still struggle to tell the story of what is happening to journalism. Page One is rich with voices, whether confident, angry or hopeful. However, it is clear there is currently not enough consensus, nor enough collaboration between all constituents of the media world to save itself from slipping further into untenable business practices or as Rusbridger calls it “sleepwalking into oblivion”.

Recently, the NY Times changed its paywall limit to 10 free articles from the original limit of 20 they rolled out last year. It is clear the right business model has yet to be found for the paper as it struggles to remain a viable online competitor. Can the newspaper survive amidst Youtube, lone bloggers and Wikileaks? The answer seems to be a resounding “Yes” but only because its extinction is unimaginable for the those whom believe in its importance.

Editor David Folkenflik, quoting a line from within the book, said the story of journalism’s upheaval is “one hell of a story”. Indeed it is. If the three sections in Page One were interpreted as three acts in a dramatic retelling of journalism’s unravelling, than the latter half of the book may ultimately disappoint. However, Page One doesn’t attempt to tell the story in its entirety because the story itself lacks and ending. There are only the hopeful voices who carry the industry’s torch through an uncertain terrain and the book does well to give them the attention they deserve.

Cheryl Brumley is assistant editor on the LSE Review of Books. Cheryl joined the PPG in January 2012 after graduating from the LSE with an MSc in Theory and History of IR. She is responsible for producing podcasts and commissioning reviews. Cheryl previously conducted research into social media and the Arab Spring at the Regional Centre for Conflict Prevention in Jordan, and researched for BBC World Service radio and BBC Global News. Read more reviews by Cheryl. 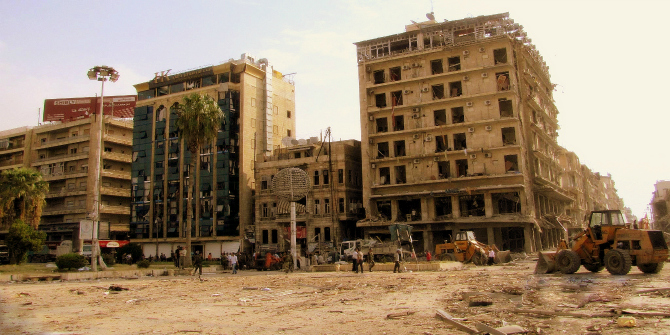