As UN Under-Secretary-General for Humanitarian Affairs from 2007 until 2010, John Holmes visited some of the most troubled areas of the world and was exposed to the harsh realities of humanitarian aid. Frequently he found that the UN’s humanitarian programmes were consistently undermined and mistrusted by both sides in any conflict. Refreshingly free of the obfuscating jargon favoured by many in the humanitarian sector, the essence of The Politics of Humanity is a reaffirmation of humanitarian principles and a warning about the consequences of their betrayal, writes Chris Harmer. 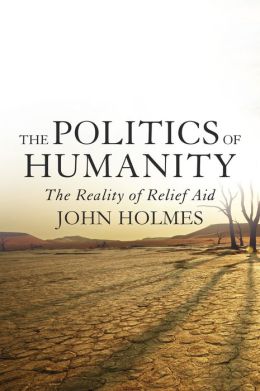 The Politics of Humanity: The Reality of Relief Aid. Sir John Holmes. Head of Zeus. March 2013.

The Politics of Humanity could easily have borne the title The Accidental Humanitarian since, by his own admission, Sir John Holmes landed the UN’s top humanitarian role with little knowledge or experience of humanitarianism.  Arriving in post after decades in diplomacy, Holmes recalls his initial impressions of the international humanitarian set up as less of a system and more an anarchical assortment of NGOs, agencies, and charities – often with little more to cohere them than the humanitarian impulse to alleviate suffering.  Yet in taking on the mantle of Emergency Relief Coordinator (ERC) 2007-2010, Holmes bore responsibility for leading the international response by this anarchical community to the worst humanitarian crises of that period.  These were principally in areas where civilians had fled conflict, others were triggered by natural disasters, but all had in common the crying need for humanitarian protection and assistance.

If Holmes displays scepticism about the existence of an international humanitarian ‘system’, the account that unfolds reveals still deeper unease about the ability to protect civilians. Indeed, the most urgent question raised by The Politics of Humanity is whether the term ‘protection’ is even appropriate, given the chasm between the reality and the rhetoric. A question which surely begs greater attention given that the numbers in need of protection are steadily increasing and that 90 per cent of those uprooted by war and violence are civilians. The proliferation of ‘protection’ roles (no doubt lucrative) followed the pervasive ‘never again’ sentiment that followed the atrocities in Rwanda and Srebrenica, when the UN Security Council passed the first of the resolutions on the ‘protection of civilians’ in war. In 2005 every single UN member state endorsed a collective responsibility to protect the lives of civilians at risk – the so called R2P doctrine.

The failure of humanitarianism in Sri Lanka

The first major test of R2P arrived on Holmes’ watch during the final stages of the civil war in Sri Lanka – probably the most controversial chapter, both in the book and his tenure. To be sure, the challenges that confronted Holmes were problems from hell: an intransigent government hell-bent on final military victory over the secessionist Liberation Tigers of Tamil Eelam (LTTE); deeply hostile territory for aid workers and a fiercely politicised and contested conflict in which both sides breached international humanitarian law and the rights of civilians. But despite Holmes’ considered account of this episode it remains difficult to reconcile his humanitarian role with the decision to pull the entire international UN effort out of the conflict zone just months before the final offensive on the LTTE-held enclave in northern Sri Lanka, between January and May 2009, where so many died, leaving so few to struggle in the ensuing carnage.

Perhaps following diplomatic rather than humanitarian instincts, Holmes instead elected to pursue quiet, behind the scenes engagement: “My view was that a frank private dialogue was better than a furious public row. I could go out in a blaze of temporary glory of denunciation of the government – but I might well take the humanitarian operation with me”. Since this is what happened anyway when most aid organisations followed suit after the UN withdrew, it is harder still to comprehend another controversial decision by Holmes to withhold numbers, choosing to remain silent about the scale of civilians in need of protection and the casualty rates.

Holmes’ defence that he could not vouch for the accuracy of figures was hardly consistent with the explicitly mandated responsibility of the ERC to advocate for people in need. Nor is his defence of the necessity to maintain a humanitarian operation wholly convincing, since access had already been fatally compromised by the UN decision to leave, as well as the actions of an implacable government. However, the consequences of his decisions are consistent with the pained accounts of those who condemned the withdrawal and non-disclosure of the number of civilians as abject  failure to either protect, bear witness, or fulfil the UN obligation to act as moral conscience of the world. In damning language a leaked UN report condemned the organisation for grave failure in its responsibility to protect ‘hundreds of thousands of civilians’ and for effectively providing a witness-free, open season zone where belligerents could – and did – commit atrocities against civilians with impunity.

If Holmes chose quiet diplomacy in Sri Lanka the same can hardly be said of his position on the impact of indictments issued by the International Criminal Court (ICC) on potential peace negotiations. This issue hangs over his accounts of Sudan, South Sudan, Uganda, and the DRC, where impunity for mass atrocities is endemic, among them the cross-border chaos unleashed by Joseph Kony’s Lord’s Resistance Army (LRA). In language perhaps surprising for a humanitarian, Holmes argues that justice would best be dispensed from the barrel of a gun. Here he is in putting the case for “taking Kony out”: “Killing or capturing [him] will be no easy task. But it is not impossible. We have the capacity and … intervened elsewhere in the world about far less. The LRA have killed and terrorised far more than Al Qaeda – it’s just that their victims weren’t western citizens”.

Holmes also challenges the oft-repeated mantra so frequently heard in humanitarian circles that there can be “no peace without justice”. While he acknowledges the need for documentation of atrocities and, in the long term, accountability, he also questions whether Kony would have come in from the bush to sign a peace agreement had he not faced ICC charges. In Holmes’ estimation tens of thousands of lives might not have been ruined in the terror wrought by the LRA in the years since the indictment was handed down by the Court in 2005.

Humanitarian principles and ‘talking to terrorists’

Elsewhere in these memoirs the mask of this unlikely humanitarian slips to reveal more the character of a diplomat and perhaps too the traits of his political masters (Holmes was formerly advisor to Tony Blair). He certainly displays few of the characteristics of his predecessor, Jan Egeland, famed for his impassioned demands – be they for more helicopters after the Kashmir earthquake, railing against the Americans for ‘stinginess’ after the tsunami, or lambasting despotic regimes for their crimes. But where Holmes’ most ardent humanitarianism does emerge is in his defence of the founding principles of the modern humanitarian movement: independence, neutrality, and impartiality. And it re-emerges when condemning the increasing integration of humanitarianism into security and military strategies, especially in parts of the world viewed by western powers through the lens of the war on terror – notably Afghanistan and Somalia. “The point is that humanitarian aid is a moral imperative not part of a political strategy. It has to be given purely on the basis of need, objectively assessed, if it is going to be effective and acceptable to warring parties and the populations in need … [T]he consent of those engaged in fighting and the communities on the ground is needed … This can never be forthcoming if aid is being used … as a political or security tool for one side or another”.

Refreshingly free of the obfuscating jargon favoured by many in the humanitarian sector – notably when addressing the ‘protection’ of civilians in contexts where there is none – the essence of The Politics of Humanity is a reaffirmation of humanitarian principles and a warning about the consequences of their betrayal. 150 years after the founding of the modern humanitarian movement, Holmes reminds us that a reputation for independence and impartiality is hard to acquire but easy and quick to lose – and that it is always the most vulnerable who pay the price.