In Mekong Dreaming: Life and Death Along a Changing River, Andrew Alan Johnson offers a new anthropological study that explores how infrastructural projects – in this case, hydropower dams on the Mekong – interrupt and reconfigure the social life of the river and relations of those whose fate has long been intertwined with its currents. This accessible book powerfully illustrates how the more-than-human, and the stories and techniques central to daily life on the river, cannot be separated from the political realm as well as the ways in which the Mekong and the border itself are conceived and reshaped, writes Dominique Dillabough-Lefebvre. 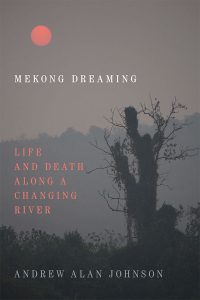 Standing at the banks of the Salween River several years ago, where it forms the dividing line between Myanmar and Thailand, a Karen villager remarked to me that the lives of those in this area were potentially soon to be transformed by the construction of large hydropower dams planned along the river. With great sadness, it was evident to these villagers, as well as a vocal chorus of local environmental activists, that plans to carve barriers through this landscape would have profound socio-environmental impacts on all those who depend on the river for their livelihoods, transportation and safety. Here, infrastructure projects, rather than grand visions of a modernising future, were foreseen as potent impending threats which would interrupt the flow of water and thus the very sources of life in these areas.

These often apocalyptic visions of a future under threat do not reflect unfounded fears, as Andrew Alan Johnson’s rich ethnography of rural life in Ban Beuk demonstrates. The lives of those in the pseudonymous Ban Beuk, a Thai village lying along the banks of the Mekong River where it separates Thailand and Laos, have been profoundly reshaped by the upstream construction of hydropower dams. This accessible anthropological work, Mekong Dreaming, demonstrates how infrastructural projects – in this case, hydropower dams on the Mekong – interrupt and reconfigure the social life of the river and relations of those whose fate has long been intertwined with its currents.

Photo by Simon Berger on Unsplash

Through carefully woven narratives tracing local stories of the borderlands, ranging from fishermen’s detailed descriptions and dreams of the Mekong to the rapidly disappearing fish which travel its waters, Mekong Dreaming links the sources of local dispossession – in these areas considered marginal – to the power-hungry needs of Bangkok and the Chinese drive for infrastructural and hydrological control. Chinese infrastructural ambitions, usually in partnership with neighbouring countries’ energy corporations, have reshaped the landscapes of South and Southeast Asia in a drive to satisfy the demands of the world’s largest energy consumer, with often little or none of the power going to affected communities and leading to large-scale energy surpluses at high environmental costs. As a villager of Ban Beuk, Lert, explains:

The difference is that here, we are free. Here, we are our own masters, with nature, with freedom [ seriphab], independence [itseriphab]. The military can come in, they can take away everything, but here with the river we are still free. [Lert then turned back to the river.] But if the river changes, then we can’t do anything. And China will make it change. (113)

Here Johnson’s book finds creative ways of illustrating the potent social and economic forces which enable mega-projects such as dams to happen, while also illuminating the other forces which are interrupted or emerge in their wake. The creation of ‘difference’ and distance – the ability of populations to dissociate from the impacts of large projects on the lives and ecosystems of the people living along watersheds – facilitates processes which centralise capital accumulation through the exploitations of the margins. This provides a challenge to the claims of sovereignty which existed in watersheds, where responsibility and authority are carefully negotiated between human and non-human forces. In doing so, Mekong Dreaming touches on a broad range of issues from local knowledge of the river and its spirits to the taxonomy of riverine species, labour migration, borderland economies and debates over national and local sovereignty.

New rhythms originate when the Chinese controller of the Jinghong Dam decides to release or retain water, decisions that are on principle not communicated downstream (99)

While the patterns of life in the river are transformed by new rhythms imposed by dams, so too are the patterns of social life and the powerful non-human forces which exist as part of waterworlds. These changes have shifted and interrupted a ritual calendar which moves along with the Monsoon cycle and thus the cycles of the river – marked by abundance of food at the times of year when fish are plenty and by the changing seasonal cycles. Expressive descriptions of the Mekong and peoples’ relationship with all that constitutes its space are a constant thread throughout the book, which seeks to displace a strictly human perspective on the political. For example, the great rock (kaeng) of the river, which guides the rapids and shapes the flows of the river, is imbued with power, personality, names and mythologies. This is juxtaposed with descriptions of local maps held by villagers of hydrological maps demarcating fishing rights.

Through evocative narratives, Johnson illustrates, for example, how village headmen, local fishermen and those travelling the river negotiate and lay claim to the waters, demonstrating the local contingency of notions such as the border, nation and sovereignty as they relate to ownership and authority. As one villager explains: ‘Boh kiaw khong’— ‘[the nations are] not applicable [here]’ (77). But more than just physical demarcation and maps, Johnson traces the bond between belief (khwam chua) and technique, or the role of magical mantras and deities in how local people negotiate fishing and the river. Ritual ceremonies in which the spirits that guard the buek are fed – an important fish of the Mekong – are critical parts of the same calendar which mark seasonal shifts and times of abundance.

The book finds diverse ways to emphasise how the more-than-human, and the stories and techniques central to daily life on the river, cannot be separated from the political realm as well as the ways in which the Mekong and the border itself are conceived and reshaped. In this way Mekong Dreaming powerfully illustrates how our lives are constantly structured by things unseen or distant: the decisions of bureaucrats far away from us act in ways which reshape lives and ecosystems entirely and, in turn, the powerful forces and spirits which are part of the world of those living in this rural Thai community.

Rather than simply allowing the religious, cosmological or more-than-human dimensions to silence other forms of legitimacy, Johnson powerfully demonstrates how forms of authority derived from such sources can also be overtly challenged. Many of Johnson’s interlocutors, for example, ‘dismissed claims to barami [forms of Buddhist spiritual mastery] as hypocritical attempts to justify inequality and corruptly cling to power, using elite trappings to gain currency among ignorant villages’ (59). This pushes against a somewhat orientalist tendency in academic work to overemphasise non-questioning moral authority derived from merit-making and Buddhist cosmology at the expense of people’s own ability to see through these as attempts to legitimise coercive and extractive practices. Rather, the book acknowledges that people are often able to see through this and are acutely aware of the centrality of patronage networks, or how certain people instrumentalise these notions to gain power and authority. For example, discussions of the reconfiguration of political authority in the wake of the 1997 economic crisis and the emergence of the Yellow Shirt and Red Shirt Movements are here nicely interwoven within the very space in which these movements and their political consequences have powerful impacts. The rhythms of life along the banks of the Mekong, of the border police, of the dams controlling the flow of water, of migrant labour and of the river itself here are the leading pattern guiding Johnson’s ethnographic descriptions.

As rhythms shift, forms of knowledge and being are inherently altered. Scarcity of fish forces fishermen to abandon old methods, turning to using electricity to fish. Precarity breeds an openness to outside perceived opportunities which have the potential to transform farming life. Here, efforts by Charoen Pokpand (CP), one of Thailand’s largest conglomerates, to encourage regulated hog farming are abandoned when a cycle of dependence on the corporation for each step of the process leads to limited profitability. Possibilities are abound in this changing border world, and Mekong Dreaming explores both the potential and foreclosure of opportunities emerging through the consequences of infrastructural change. Power, authority and change, seen from the vantage point of what is seemingly a remote village, helps us reframe our understanding of scale, and how sources of power, whether the military, a line dividing nations, a dam blocking the flow of water or a powerful river spirit, all join together in a strange dance.

Tracing this dance, like any good anthropological writing, allows Johnson’s book to become a call to take more seriously the worlds of people whose lives may appear distant from ours in many ways. And perhaps most critically, the story guides us through humans’ remarkable and persistent ability to willingly overlook the impact that decisions – such as erecting a large concrete barrier in a river in the name of progress – have on the lives of seemingly distant figures.

Dominique Dillabough-Lefebvre is a doctoral candidate in Anthropology at LSE and Leverhulme Trust Scholar at the International Inequalities Institute (LSE). His research looks at the politics of agrarian change in Myanmar, in particular the effects of alterations in legal land regimes upon long-standing inequalities among minority ethnic and peasant groups. Other thematic interests in this context include: ethnonationalism, processes of animist conversion to christianity, environmentalism and militarism. He is also a photographer and film-maker, and has conducted ethnographic work and photographic projects in countries including Nepal, Myanmar, Bolivia, South Africa, Canada and the UK.