Social Research after the Cultural Turn aims to address fundamental questions facing those working in the social and human sciences today: How have the epistemological and political contexts of social research changed? Can we still define a distinct sphere of ‘the social’ to research? What distinguishes social research from cultural studies and the humanities? Donna Peach writes that the breadth of topics and depth of enquiry into epistemological and methodological assumptions makes this book a useful companion for academics in any area of the social sciences.

The idiom ‘do not judge a book by its cover’ certainly applies to this book. The seemingly innocuous title, alongside the subtle hues of yellow thermometers hanging from blue helium-filled balloons against a grey background, suggests a restrained selection of content. The need for a more measured approach quickly becomes apparent though, as Social Research after the Cultural Turn impressively traverses the multifaceted tensions and opportunities associated with the movement to make culture the focus of contemporary debates within the social sciences. Sasha Roseneil & Stephen Frosh provide a stimulating excursion illuminated by diverse perspectives that extend the socio-cultural arena and negotiate the current limits of its navigation. All but two of the contributors – Gordon Lynch (Kent) and Mike Savage (York) – are based at Birkbeck, University of London. Thus, this anchors them and presumably the majority of their readership, including myself, to a British strand of social research.

The 21st century British social research perspective of the ‘cultural turn’ reflects the underpinning epistemological assumption that knowledge is not universally or quantitatively decreed. Each social research discipline and their location in time and place influence the emerging meaning or construction of what constitutes the ‘cultural turn’. Some critical social psychologists (see Hepburn) highlight Kenneth Ring’s formal challenge to the epistemological values of experimental methods as a turning point. However, recognition of a ‘cultural turn’ over the past 60 years should not assume a solely linear process. Indeed, as Roseneil & Frosh argue, the word ‘turn’ suggests a change in direction, which is complex and enriched by its cyclical and situated approach to the construction of knowledge (p.6).

As a proponent of the cultural turn I recognise that we all actively construct knowledge, and one reader’s understanding of the book may differ from the next. With this in mind, this review is based upon what a reader might gain from it whether or not they consider the cultural turn to have occurred. I am mindful that those who do not advocate the relevance of a cultural turn may not read this review or indeed this book. But on whichever side of the debate one is situated, not reading this book denies an opportunity to raise questions and challenge one’s own perceptions. Such questions are not solely about the existence of the cultural turn, but about the expanse and limitations of its relevance and usefulness.

The breadth of subject matter covered is extensive and includes sexuality, feminism, racialisation, identity, digital data, religion, law, development, food production/consumption, and psychoanalysis. The chapters divide into two broad themes, which debate whether or not the cultural turn has occurred. I recognise this distinction, but as a reviewer, I consider the book’s most valuable contribution to be its harvesting of the complexities and weaknesses that construct or denounce the cultural turn, thereby encapsulating the intricacies of divisions that occur even within broadly accepting disciplines.

In ‘Living with Two Cultural Turns: The Case of the Study of Religion’, Gordon Lynch discusses the scope for the cultural turn to contribute usefully across the social research spectrum, from individual subjectivity to understanding global events. Lynch argues that different research disciplines have developed distinctive relationships with culture, which require productive development if constructive progress is to occur. He explores the relationship between subjective reflexivity and the mediatisation of religion, and reminds us of C. Wright Mills’ The Sociological Imagination (p.86). This serves to incite an awareness of the influence of combined historical structures, cultural truths and subjective experience upon our social realities (p.87), leading Lynch to argue that future studies of religion should turn their lens towards our everyday realities in order to understand how they are experienced and socially structured (p.88).

In her chapter ‘The Gaze of Development after the Cultural Turn’, Karen Wells presents a less optimistic case for the cultural turn to mediate the historical structures and complex contemporary realities underpinning developmental studies (p. 111). Wells highlights the enduring tensions between theoretical knowledge and ‘real world’ needs, which can become the antithesis of progress (p.113). She explains that within the expansive field of development studies, the term ‘cultural’ is rooted in colonial, Anglophone histories which structure and constrain the space to turn. Wells proceeds to detail how the focus of development studies is further impeded by the governmental processes of policy-approved practice. This focus, Wells suggests, prevents development becoming a field of study in its own right; to have its own agency explored and heard. Wells cites a formative post-development text by James Ferguson, The Anti-Politics Machine, which argues that despite all the “expertise” that goes into formulating development projects, they nonetheless often demonstrate a startling ignorance of the historical and political realities of the locale they propose to help.

In conclusion, this book is a must read. The breadth of topics and depth of enquiry into epistemological and methodological assumptions makes it a useful companion for a wide range of academics. As a reader, I reflect that to denounce another’s experience, another’s truth, is to undermine your own truth. Despite its weaknesses, the cultural turn has made an extensive contribution to our understanding of our social world. If this is to continue, your voice, my voice, our voices, need to collaborate within this vital debate. 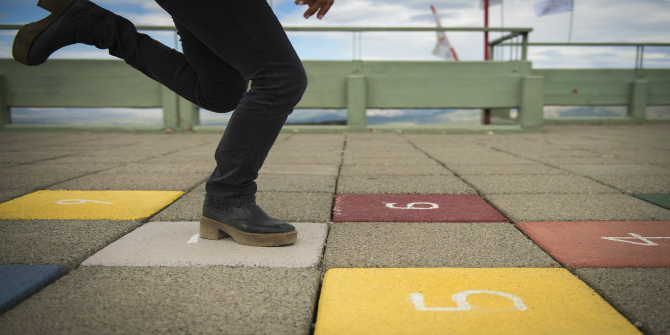