Psychogenic explanations for illnesses still appear frequently within medical and academic literature, in “common sense” public discourses, and in medical diagnoses of patients. But how plausible are these explanations? Authors of our Own Misfortune? proposes that psychogenic explanations for physical illnesses are subject to a complex mix of confusing concepts, accompanied by certain moralistic and ideological assumptions about people and their illnesses. The strength of the book lies in its detailed cataloguing of a great deal of evidence around ME/CFS and psychogenic diagnoses, but Sally Brown feels that the author’s arguments could have been strengthened had a more detached and academic style been adopted. 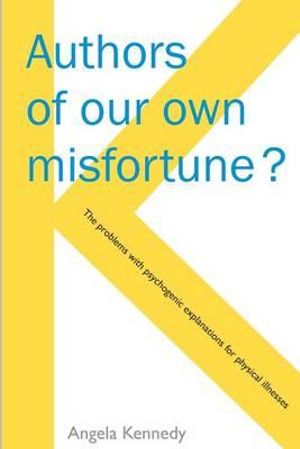 Authors of Our Own Misfortune? The Problems with Psychogenic Explanations for Physical Illnesses. Angela Kennedy. Createspace. September 2012.

Authors of Our Own Misfortune? explores the ways in which psychogenic explanations have been used to diagnose or at least to provide reasons for the existence of a range of physical illnesses. Beliefs about psychological and emotional causes of physical illnesses have existed for as long as people have tried to explain illness and disease, and in many societies and at many points in history, if a physical cause could not be attributed to a disease, then spiritual, emotional and psychological causes have been sought. In this book, Angela Kennedy, a social sciences lecturer with particular interests in social exclusion, moral panics and the “science wars”, aims to critique the continuing use of psychogenic explanations for what might be described as “modern” illnesses, including Myalgic Encephalomyelitis (ME) and Chronic Fatigue Syndrome (CFS). Although other illnesses are mentioned, the book very much focusses on ME/CFS.

Kennedy has written widely on ME/CFS for patient advocacy and support groups such as The One Click Group, and the National ME/FM Action Network, and is well known amongst ME/CFS advocate groups. In addition, as she acknowledges in her preface, she has very personal reasons for writing this book, as she cares for her disabled daughter. As a carer she has had a great deal of experience of searching for a physical cause for her daughter’s illness whilst that illness was labelled psychogenic.

The key aim of the book is to demonstrate that there are flaws in many of the current explanations for illnesses such as ME/CFS, whilst also exploring the beliefs around “medically unexplained symptoms” and the challenges they pose particularly for patients and their carers. Throughout the book Kennedy questions psychosomatic diagnoses for illnesses that have produced a physical impact in the patient, focussing in the first half of the book on the construction of and problems with psychogenic explanations, and in the second half concentrating on challenges of finding a “cure” and the consequences of this for patients.

Kennedy argues in the first part of the book that the origin of psychogenic explanations lies in a kind of default position whereby “medically unexplained” must therefore necessarily result in a “psychogenic” diagnosis; in other words, if a physical attribution cannot be found, there must be a psychiatric cause. Clearly this is problematic if indeed the illness is physical, and Kennedy argues that in many cases, insufficient tests are carried out particularly on ME/CFS patients to exclude physical causes. However, there seems to be some confusion in the medical literature about causation and the presence of physical abnormalities; although some studies find that a range of viruses can be present in CFS patients, such as Epstein Barr virus, and CDC report cited by Kennedy states that 90% of patients diagnosed with CFS/ME have normal test results on basic investigations. The key argument in the first part of the book is that insufficient tests are carried out and that psychogenic explanations are resorted to far too quickly.

The second half of the book focusses on the challenges and consequences of treating or “curing” ME/CFS. Kennedy reserves most of her opprobrium for the chapter on Cognitive Behaviour Therapy (CBT) and Graded Exercise Therapy regimes (GET). This chapter exemplifies the author’s approach throughout the book, which is to take a very particular view on the material presented. As Kennedy acknowledged from the very beginning that she has a personal stake in the stories she is telling, it is understandable that in her presentation of the evidence she “takes sides”; however, her argument could have been strengthened in some instances had she taken a more detached and academic view. For example, very early on in the book, in the preface, Kennedy refers to “my own research”, and yet she provides only two citations of her own, one in a ME Action newsletter and one a response to an author’s response to an academic article. In the chapter “Consequences of Psychogenic Illnesses”, Kennedy begins by saying she will tell some patients’ stories, which I had hoped would mean that her own research would appear here to illuminate in “real life”, as it were, the experiences of having a CFS/ME diagnosis, and yet no empirical research of her own appears. It seems a shame, if the author has this research, for it not to be showcased here.

The arguments made in the book rest on the use of very long quotes presented at face value, for the most part, with the reader seemingly expected to agree with Kennedy’s presentation of the various quotes. I would have preferred to read much shorter quotes, and much more incisive and detailed arguments. For example, Evidence Based Medicine, which is so influential in health care decision making, is given two very brief mentions in the book; given that evidence, lack of it, disputed presence of it, or incomplete searching for it, seems to be a core argument about the existence of physical causes of ME/CFS, a more detailed discussion of the uses of EBM could have been useful. I would also have expected a more theoretically informed argument to frame the whole book; for example, the debates on sociology of diagnosis such as Jutel’s Putting a Name to It could have usefully informed the book, and led to a more consistent and theoretically robust narrative.

The strength of this book lies in the detailed cataloguing of a great deal of evidence around ME/CFS and psychogenic diagnoses, and I expect it will be of great value to campaigners and patient advocates.

Posted In: Health and Wellbeing