In this well-received new analysis, Ben Judah argues that Putin is not the strongman he appears. Russia’s leader may be victorious as a politician, but he has utterly failed to build a modern state. Once loved for its forcefulness and the spreading of new consumer lifestyles, Putin’s regime is now increasingly loathed for incompetence and corruption. Joel Krupa finds this a fantastically engaging book, with many enlightening and provocative tales of a Russia we may not recognise. 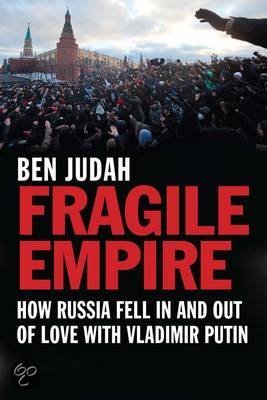 Fragile Empire: How Russia Fell In and Out of Love With Vladimir Putin. Ben Judah. Yale University Press. April 2013.

For all his flaws, shortcomings, and curious idiosyncrasies, it can never be said that Russian President Vladimir S. Putin lacks chutzpah. During a Europe-focused speech in 2007, his flair for the dramatic was on full display as he boldly proclaimed that “historians will be the [favourable] judges of what my people and I achieved in eight years”. In the same oratorical exhibition, he went on to proudly note that his United Russia party “re-established Russia’s territorial integrity, strengthened the state…[while moving] in the direction of a multi-party system” and, as a result, was poised for a promising future as Putin handed the reins over to the new President Dmitri Medvedev. It appeared to be an impressive suite of accomplishments, empirically backed by solid data. The fall of 2008 saw Putin delivering, in the words of journalist Ben Judah, “a decade of BRIC economic growth, a 140 per cent hike in incomes, and the defeat of an American ally [Georgia].”

Yet according to the new book Fragile Empire: How Russia Fell In and Out of Love With Vladimir Putin by the aforementioned Ben Judah, Putin’s time at the helm of the geographically enormous Russian state has been nothing short of catastrophically regressive. Based on five years of wide-ranging study and countless interviews with senior ranking government officials, NGO staffers, and even those who have gained intimate access to Putin over the course of his meteoric rise to power, the accolade-garnering Fragile Empire argues that while Putin has been an undeniable success as a politician, he has been an abject failure as a policymaker and substantive reformer. Under his harsh gaze, Judah says, institutions have been hollowed out, an unhealthy reliance on the booms and busts of commodity cycles has become a de facto national budgetary reality, and stratospheric levels of bureaucratic incompetence, corruption, and mismanagement have worsened. Russia’s economic successes appear to have been more the result of serendipity than good management, and the state’s extensive foreign policy manoeuvring in places like the North Caucasus has been rooted in ideological fervour instead of a sustainable and balanced internationalism. The picture that emerges throughout Judah’s incisive coverage of the 2000-2012 Putin period is grim, but the fast-paced writing style and broad swath of Russia-related topics that are covered make for a relatively fast read in spite of the book’s considerable length.

Some of the subjects discussed at length will be easily anticipatable by anyone with cursory knowledge of recent Russian history. Among the most engrossing is a fairly detailed analysis of Putin’s decision to imprison one-time richest Russian Mikhail Khodorkovsky on trumped-up charges of financial crimes. This oligarch – a great beneficiary of the absurdly under-priced fire sale of state energy infrastructure assets – used his billions to both expand a business empire (primarily through the implementation of various efficiencies that greatly enhanced the extraction capabilities of Soviet oil and gas mega-plexes) and bankroll anti-Putin activities. With an ego and ambition to match his outsized pocketbook, Khodorkovsky was unwilling to bow to Putin’s call for a state-centric natural resource development trajectory – a call that would curtail Khodorkovsky’s monetary returns, usher in a new high-taxation regime and enrich a cadre of routinely predatory bureaucrats. This stubborn stance cost him greatly, as he was made an example of when Putin finally arrested the tycoon on his private jet. Shaken, the other oligarchs learned an important lesson: Putin’s United Russia will not tolerate insubordination or resistance from anyone – including the most powerful or seemingly untouchable.

Similarly absorbing is Judah’s contestation of some popular beliefs about modern Russia. One memorable example focuses on the supposedly shifting internal demographics, as some assume that Russia is facing a simultaneous aging crisis and new-born baby shortage which, if unaddressed, will lead inexorably to an irreversible decline. Not so, counters Judah, who argues that often undocumented influxes of labourers from well-populated but impoverished neighbouring Central Asia countries (primarily former Soviety satellites) have taken up the jobs refused by their hosts and stabilized population growth. Judah writes that “officials admit that there are over 10 million immigrants [many illegal]” in the country – more than enough to make up for the 7 million “lost” during the 1992-2008 period (note: this is not to say that the newcomers live like their Russian counterparts; in a sad mirror of other nations, their situations are often miserable – primarily as a result of government codes that fall far short of preventing slave-like working conditions, the constant threat of attacks from racist skinheads or nationalist groups, and squalid living quarters). Neither is the country about to be over-run by much-feared Chinese expansionism; even though Chinese businesspersons are purchasing tracts of land, it is far from a whole-scale domination. Indeed, many border cities have surprisingly small Chinese population bases – a trend likely to continue with Chinese economic growth making opportunities at home much more attractive.

Despite his obvious talents, this work is not immune from criticism. As Judah emphatically and repeatedly points out, Putin has been far from perfect, but his abundant criticisms of him seem less newsworthy when one conducts a quick assessment of the opposition (neo-Nazis or violent Islamophobes, anyone?). Until a plausible governance alternative solidifies, previous experience demonstrates that altering the current state of affairs can make a situation go even further downhill; indeed, even more promising reformers have turned very sour), and Judah should likely have spent more time assessing Putin’s positive characteristics. However bad Putin may be, the other options could very well be worse. Moreover, this reviewer would also have liked to see less repetition of some of the same facts (ad nauseum references to the disparities in life expectancies between different regions of Russia comes immediately to mind). These negative comments are, however, very minor, for this is a fantastically engaging book.

Victims of Stalin’s terror and still slowly recovering from the traumatizing collapse of a unifying Communist ideology, the Russian people remain susceptible to a range of systemic issues that have no easy answer. Like other countries, Russia is suffering from several problems that are all raging simultaneously – the much-ballyhooed examples of resource dependency, stark inequality, outrageous Muslim persecution, and social instability are only the tip of the iceberg. If one were to summarize Russia in one word, it would be “fragile”. No clear answer emerges on how to deal with it all, but, at the very least, the fundamentals need to be remedied: institutions will need to be made more antifragile, non-Muscovites will need to be better engaged in the political process, and the perennial problems of nepotism, patronage, and graft will need to be better controlled. Only then can Russia reverse a status of, in the words of Judah, “one of history’s great failures”. Whether it will – or even can – do so is highly unlikely.