Across thirty six essays The Oxford Handbook of the History of Nationalism presents the ideas, sentiments, and politics of nationalism. With international examples the Handbook also looks at the major challenges to nationalism: international socialism, religion, pan-nationalism, and globalization, before a final section considering how historians have approached the subject of nationalism. Eric Kaufmann finds a rich account of modern nationalism throughout the world. 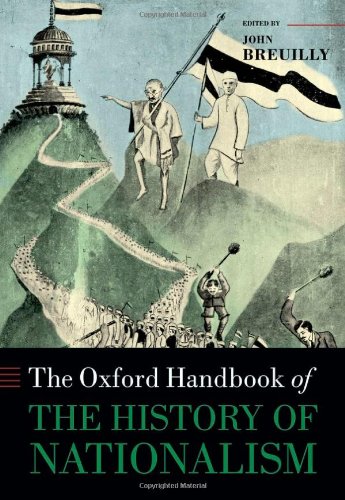 What do Obama’s lapel pin, the PKK in Turkey, the rise of the far right in Europe and even the Taliban share? In a word, nationalism. There are over 6000 languages worldwide nestling under a grid of fewer than 200 states. No wonder just a handful of states are mono-ethnic. The ‘imperfect’ fit between culture, territory and power and the quest to align them largely delineates the problem of nationalism.

Nationalism is not natural but historical. On this the star-studded cast of John Breuilly‘s Oxford Handbook of the History of Nationalism agree. They also find common ground in challenging both the ahistorical approach of much contemporary social science and history’s atheoretical fear of generalising beyond time and place. Practising the lost arts of historical sociology and political history, the authors provide a rich account of modern nationalism throughout the world.

John Breuilly is well-placed to lead this project: his landmark Nationalism and the State (1985) filled in the political blanks left by Ernest Gellner, Eric Hobsbawm and Benedict Anderson, all of whom were more taken with industrial capitalism and mass communication. As such, Breuilly’s signature piece joins the select library of the nationalism ‘canon’ developed in the 1980s by Gellner, Hobsbawm, Anderson and Anthony Smith.

As a species, our innate quest for belonging and identity grafted itself onto social containers of many shapes and sizes while military, administrative and economic imperatives called for optimal units that were often smaller or larger than the contemporary state.Yet, over time, social and political processes converged on a common model, the nation-state.

How and why this occurred is a central question Breuilly and his contributors contemplate. Breuilly is at pains to detach his project from ‘national history’, which often shades into a narration of the national past. He abjures accounts which simply describe the flow of events within a set of national boundaries. The focus therefore rests on the dynamics of nationalism as a political ideology and movement as it reordered society and politics across the modern world. This theoretical approach renders the book irreducibly social scientific, despite the historical credentials of most of its authors.

The book embraces a fully global reach. The term Eurocentric is casually applied, often unfairly, to numerous disciplines. But this charge strikes closer to the mark for nationalism studies – which is inexcusable when violent nationalism is more common outside than inside Europe. This book, by contrast, integrates wide coverage of Asia, Africa, North and South America and the Middle East, leaving the reader with a sense of polycentricity.

The book is arranged in six parts but can essentially be cut in two. The first 500 pages examine the emergence and vicissitudes of nationalism in various regions of the world. The rest adopts a thematic approach, examining, for instance, the relationship between nationalism and, inter alia, socialism, racism, international relations, Islamism and historiography. The familiar European core of the subject is well represented: Erica Benner’s tracing of Enlightenment and Romantic strains in nationalist ideology; John Hutchinson on cultural nationalism; Miroslav Hroch’s outline of Central and East European national movements; Oliver Zimmer on the clash between irridentism and nation-building in interwar Europe; Breuilly on unification nationalism in Europe, and many more. Yet no other book I know of offers equal billing to the nationalisms of sub-Saharan Africa, North, South and Southeast Asia, the Middle East and both Anglo and Latin America. Breuilly’s insistence on comparative chapters helps steer scholarship away from national navel-gazing toward common theoretical touchstones. This helps bridge the vast territorial expanse traversed by its intellectual adventurers.

An added treat is Breuilly’s ability to convince scholars with different specialties to collaborate on chapters, as with Bruce Berman and John Lonsdale on Africa or the joint effort of Don Doyle, an Americanist, with Latin Americanist Eric Van Young. The latter show just how convincingly nationalist revolutions gave rise to national identity in the Americas rather than the other way round. In sub-Saharan Africa, Berman and Lonsdalequery the dictum that ethnic divisions doomed ‘artificial’ colonial states from the start. In fact ethnicity and nationhood largely rose in tandem on the continent and few stateshave experienced secession. As Berman writes in a later chapter, African national identities remain resilient, even where tied to weak states and refracted through competing ethnic lenses.

The contributors, remarks Breuilly, agree on the modernity of nations. This perspective largely prevails, but it is a strength of the book that authors sport a wide range of theoretical badges. Peter Burke in particular dissects the neat division of time into the modern and pre-modern, arguing that there were numerous continuities across the ‘Great Divide’ of 1800. The use of vernacular languages and the patriotism of courts and cities pulls the rug out from under the conceit that imagined territorial communities were absent before 1800. The prevalence of Empire until 1914 answers to the commonplace that nations usurped dynasts after the storming of the Bastille. Religion, notes Peter van der Veer, sacralised language, territory and history, furnishing many of the metaphors (i.e. promised land) which underpin modern nationalism.

The same theoretical openness characterises David Henley’s exceptional chapter on the origins of Southeast Asian nations. Covering a wide swath of ground east of India, south of China, north of Australia and west of Papua New Guinea, Henley takes us up to the end of the colonial period. Why did the nations of Indo-China – Laos, Thailand, Cambodia, Vietnam – emerge with solid ethnic majorities and a demarcated sense of national consciousness while Indonesia and Malaysia were riven by separatism and disunity? Why an Indonesian rather than Javanese nation, and why not a unified Indochinese nation? Henley admits such options were on the table. Yet he argues that the interplay between the precolonial inheritance and the timing of the modern nationalist ideas’ entrance onto the historical stage determined the eventual configuration. Vietnam’s precolonial kingdom enjoyed a period of unity in the nineteenth century, and its personnel and memories plugged directly into the modern nationalist movement. Javanese unity, on the other hand, was experiencing one of its periodic ebb tides when nationalist ideas flooded in. Hence nationalists gravitated to the modern colonial construct, Indonesia. The question of timing was entirely moot in Malaysia, which lacked a precolonial tradition of statehood.

The book is as strong on national reproduction as nation-formation. A series of chapters brings us up to date on nationalism since World War II. Rana Mitter nicely captures the high-stakes battle of the history books in contemporary China and Japan. John Sidel, in an interesting intervention, writes that decentralised popular nationalism – as opposed to state-directed narrative – characterises the Philippines: in part because it lacked a strong independence movement. Yves Déloye heralds the importance of the mass public – nationalism’s ‘consumers’ – who help produce and reproduce national symbolism through everyday activities such as music and sport.

Thematic chapters usefully update the reader on cutting-edge thinking about the interplay between nationalism and supranational/transnational currents. The redoubtable James Mayall writes that international society’s post-1945 aversion to recognising new states has been abridged somewhat of late: where aggressor states commit crimes against humanity, as in Kosovo or South Sudan, this may justify recognising a new state. Richard Caplan usefully reminds us that humanitarian intervention has surged since the Cold War: 46 UN peacekeeping missions since 1988 as compared to just thirteen in the 40 years to 1988. Cemil Aydin surveys the importance of civilizational ‘pan’ nationalisms (Asian, Islamic, African, etc) and finds these offered important inspiration for nationalists even if, as Fred Halliday notes in the case of pan-Arabism, their grander political dreams foundered on the rocks of established state structures. Globalisation, touted in the 1990s as challenging the nation-state, is, for Jürgen Osterhammel, a force that failed to offer an emotional counterpoint to national attachment.

Taken at once, the book juxtaposes advances from numerous regional and thematic subfields to open up theoretical vistas for specialists. At the same time, its chapters decorate this theoretical tableau with rich detail. As such the book will engage both students and lay readers.

Economic inequality, climate change, political disenchantment, civil war: nationalism, for good or ill, is implicated in most of the world’s problems. This book helps us understand it.

Eric Kaufmann is Professor of Politics at Birkbeck College, University of London. He is the author of Shall the Religious Inherit the Earth (Profile 2010), The Rise and Fall of Anglo-America (Harvard 2004), The Orange Order (Oxford 2007) and Unionism and Orangeism in Northern Ireland since 1945 – with H. Patterson (Manchester 2007). An editor of the journal Nations & Nationalism, he has written for Newsweek International, Foreign Policy and Prospect magazines, and blogs at Huffington Post. His current ESRC grant, affiliated with the think tank Demos, examines white working-class responses to diversity in the UK. He may be found on twitter at @epkaufm. Read more reviews by Eric.