Achieving Impact in Research aims to address the importance of understanding and achieving impact for the purposes of gaining research funding and reporting achieved impact for the Research Excellence Framework (REF).The book includes contributions from researchers and researcher developers who feel that impact is ill-defined and poorly understood despite its prevalence in policy documents, websites and institutional activities. Catherine Easton finds that this a light and accessible manual, though some information is too general. 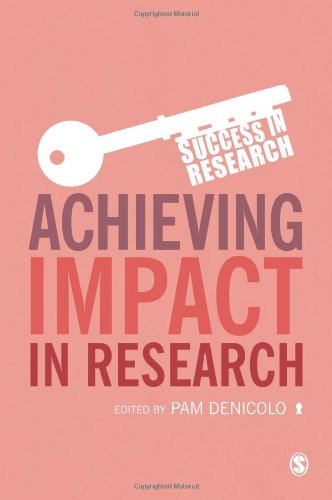 I strongly suspect that no-one in UK academia has managed to shield themselves from the “Impact Agenda”. Not only is the concept controversial but it has also proved difficult to pin down and even more difficult to embed into individual and departmental research strategies. Having been party to many a “but is it actually impact…or at least the impact they want?” conversations I was intrigued to see whether a book entitled Achieving Impact in Research could fulfil what I saw to be quite a bold remit.This text is a collection of chapters from a number of contributors, many of whom were involved with Vitae’s Impact and Evaluation Group and the UK Council for Graduate Education. This, in general, is a positive aspect of the work as it brings numerous perspectives to a multi-faceted area but at times gives an impression of sitting in on a meeting of impact agenda “insiders”. From the outset, the book recognises that the topic is “ill-defined and poorly understood” and attempts to address the conflicting positions taken while also giving practical insights and advice.

The book is written in an engaging style, liberally employing pedagogical features such as key points, text boxes, diagrams and reflection points. While it is not formally divided, the first half of the book focuses upon the nature of impact in research while the second takes a more “how to guide” approach, dealing mainly with practical advice. In an early chapter the question of whether or not the agenda is something new is addressed, with a conclusion that it was drawn from themes already emerging from the within the UK research system but has been developed as a concrete term to bring stability to the concept. It is at this point, it is accepted, that this stability fuelled and inevitably led to the need for measurement with the related “consulting, diagramming and reporting” which, it can be argued, generated negative responses to the agenda.

Jennifer Chubb tackles the issue of how the impact agenda can be reconciled with the attitudes and ethics that motivate research. This question is unanswerable due to the many differing motivations individual researchers have for doing work and the text appears to recognise this by acting as a guide for self-reflective analysis in the light of the need for impact. The chapter in part draws upon the preliminary findings from a number of qualitative interviews undertaken with academics on their motivations and understanding of impact and attempts to reconcile these with the formal agenda. A conclusion is drawn that “the language used within the context of the Impact Agenda often confuses and complicates the issue”. This is addressed later in the book with an “Impact Agenda Glossary” which aims to help an interested party navigate his or her way around the topic, perhaps also highlighting the peripheral bureaucracy surrounding its implementation. While the chapter presents some useful guidance, it feels at times superficial and more could have been made of the empirical research. However, it is accepted that the book as a whole appears to be more of a manual rather than an in-depth academic analysis of the area.

Strategies for embedding impact into research proposals are addressed by Rob Daley and Sarah Shinton. This covers applications not only to UK Research Councils but also to some of other large funding providers. As in other chapters, the approach taken is one that attempts to guide the reader towards self-reflection to “facilitate the connection between researcher and potential user”. Useful insights are given into approaches assessors take to evaluate impact alongside planning strategies, checklists and a case study. While the importance of institutional support is acknowledged, the chapter acts as a useful resource for the emerging researcher grappling for the first time with a “Pathways to Impact” statement.

Tony Bromley in Chapter Eight outlines practical methods to evidence impact and, as the “how can I prove impact?” question often arises, covers a topic essential to the wider understanding of the overarching agenda. The difficulty of giving advice that is relevant across academic disciplines is accepted early in the chapter and this has led to a general approach being taken. This does not detract from the value of the chapter as the exercises, diagrams, quick tips boxes and questions all provide useful guidance on research evaluation alongside insights into what actually counts as evidence of impact.

With the impact agenda currently having such a prominent influence on research planning and development it was only a short amount of time before impact-focused publications appeared. Achieving Impact in Research attempts both to define the impact agenda and its rationale and to provide general, targeted advice on how to engage with it. It is in this second aim that the book succeeds best. Much of the practical guidance is general enough in its approach to be relevant across disciplines but focused enough upon self-reflection and planning to be of tangible use. As such, I would recommend this book to those teaching research skills at an institutional and departmental level and also to early career researchers trying to understand impact and address it in research planning and implementation.

Dr Catherine Easton is a lecturer in Lancaster University’s School of Law. In 2010 she completed her PhD on access to the Internet, citizenship and disabled people. Her research interests include Internet governance, domain name regulation, intellectual property, access to technology and human/computer interaction. In 2012 Catherine was awarded an HEA international scholarship to carry out research on educational technology in the USA.  Read more reviews by Catherine.