In Democratic Decline and Democratic Renewal, Ian Marsh and Raymond Miller link the decreasing quality of democracy to the failings of political parties. This detailed study of the politics of the UK, Australia and New Zealand is an ambitious attempt both to document decline and to reverse the trend, finds Jack Simson Caird, who is impressed by the authors’ proposals to enhance the role of parliamentary committees. 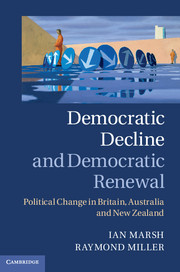 Democratic Decline and Democratic Renewal is an ambitious book about the state of democracy in the United Kingdom, Australia and New Zealand. It is ambitious, firstly, because the subject matter is broad: it seeks to identify the reasons for democratic decline, and to propose solutions to enhance democratic governance. Secondly, it addresses these issues in three countries. Thirdly, each of these single country studies is weaved into an over-arching analysis. This approach is not without risk; however, it is ultimately rewarded as Democratic Decline and Democratic Renewal puts forward a compelling case for major democratic reform in all three countries.

Part One sets up the problem the authors are seeking to define: that democracy has declined in the countries where its provenance is ‘longest and deepest’ (p.3). Decline is defined at the decrease in democratic engagement and citizen participation. Part I also describes the four main conjectures that underpin their analysis of the relationship between citizens and their political systems in each of the three countries covered:

In Part Two these conjectures are then used as an analytical framework to evaluate the development of Britain’s democracy over the course of the 20th Century. It begins by charting the development of the mass ‘thick’ political system. The authors explain that both main parties, Labour and the Conservatives, at the high point of the mass party system in the 1950s, had party organisations that served to create a multitude of reciprocal connections between the parliamentary leaderships, contending factions, party supporters and the wider public. These networks were responsible for securing the strategic foundations for state capacity. In other words, the mass party system connected the policy cycle to ordinary citizens. Marsh and Miller then explain the shift from thick to thin democratic governance. The social conditions which underpinned the mass system changed fundamentally, which meant that the main parties’ representational capacities were reduced significantly. For both parties, the influence of the party organisations changed radically after the 1970s, with the end result that both focused on choosing a leader that could win them an election, in the shape of Tony Blair and David Cameron respectively, rather than one that represented positions associated with the party’s respective ideology. These new style leaders were faced with a problem, without mass parties behind them and the state strategic capacity associated with them, how could they impose their strategy on the government?

Part Five proposes a number of solutions to democratic decline, requiring both foreground and background changes. Foreground changes include changing to the electoral system to better reflect the fact that the political system is no longer dominated by two parties. A multi-party system should be created. However, such changes are not enough. New Zealand has achieved major change to the political infrastructure, by changing the electoral system, but this has not improved public engagement with the policy agenda. The background also needs to be changed, in order to reconnect the citizen with the policy cycle.

Marsh and Miller argue that in era of ‘thin’ democratic governance, elections are not enough to empower governments, and this means that there needs to be a new strategic phase in the parliamentary cycle which looks at issues before the final choices are made by the executive. This strategic cycle needs to connect citizens with the formal political system. The authors argue parliamentary committees hold the solution. They need to be adapted to increase strategic capacity within the formal political system. The authors envisage ‘committees with a substantive role in the policy process (particularly at the emergent or strategic end of the process), supported by powers and procedures that sustain this role’ (p.311).

Committees are well established and important in each of the parliaments examined, as the authors acknowledge, ‘but nowhere do they perform the tasks or enjoy the standing that is envisaged here’ (p.311). A number of changes are recommended: committee chairs’ salaries would have to be increased to the level of ministers; committee staffing levels would need to be augmented; committees would need access to parliamentary time; legislative and budgetary processes might need to be reconstructed; and research units based in the Parliament would need to directly support committee operations. These super-powered committees would conduct enquiries that would inform preference formation, as protagonists engage in a transparent search for the public interest. A vital element of the process is to make the policy formation process much more transparent and accessible. The idea is to create a more consensual policy making process, whereby interest groups and citizens engage in policy formation at a much earlier stage.

Realising the authors’ vision in the UK would need a major power shift from the executive to the legislature. They recognise that this unlikely because reformers are split on how this should be achieved, and the main parties remain in control of the destiny of the system. The parties which were once responsible for thick democratic governance, in the modern context with new citizen identities and disillusionment with formal political process, now act to undermine the quality of the process, by promoting a populist and individualised politics that undermines more differentiated notions of identity and discounting more ambitious aspirations for the state.

This book represents a rich contribution to the study of democracy; it is full of detail and persuasive analysis. In the UK context, it gets to heart of the problem with the case for democratic reform. How can the main political parties be made to see that they are part of the problem rather than the solution?

Jack Simson Caird is a  doctoral student at Queen Mary University of London. His thesis analyses the theory and practice of legislative constitutional interpretation in the United Kingdom. Read more reviews by Jack.

Posted In: Australasia and Pacific | Britain and Ireland | Politics