Crisis is everywhere: in Iraq, Afghanistan, Syria, and the Congo, in our housing markets, money markets, financial systems, state budgets, and sovereign currencies. In Anti-Crisis, Janet Roitman steps back from the cycle of crisis production to ask not just why we declare so many crises but also what sort of analytical work the concept of crisis enables. Luke McDonagh finds this book gives an important account of the dangers of engaging with arguments solely from within a crisis narrative, and gives the reader much to ponder. 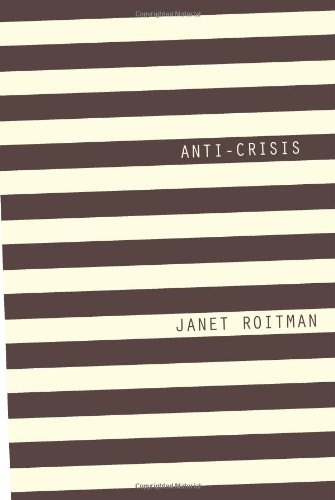 In the age of digital mass media and online social media, the notion of ‘crisis’ is ever present. Whether it is caused by climate change, civil war, financial instability, or unemployment, a crisis is happening somewhere all of the time (and as the case of the 2007-08 financial crisis shows, in some cases it can apparently happen everywhere simultaneously, albeit momentarily). Yet, despite its significance as a concept, there is surprisingly little academic analysis of the concept ‘crisis’ itself out there. In her new book Anti-Crisis, Janet Roitman attempts to take a step back from merely analysing any particular crisis in descriptive detail; instead, Roitman’s aim is to use examples of crisis narratives, such as the financial crisis of 2007-08, to provide an enlightening, critical account of ‘how crisis is constructed as an object of knowledge’.

Having first reviewed the origins of crisis as a historical concept in the first chapter, in the following chapters Roitman goes on to examine the use of crisis in contemporary discourse. In particular, she notes that when politicians, academics and scientists frame a certain situation in crisis terminology, the political debate immediately becomes more charged; indeed, simply invoking the term crisis enables some political and intellectual possibilities, while foreclosing others. Roitman notes:

“…crisis serves as a transcendent placeholder, because it is a means for signifying contingency; it is a term that allegedly allows one to think the ‘otherwise'”

A clear example of this occurring, which Roitman examines in cogent detail, is the 2007-08 ‘bank bailout’, where governments around the world including the US and the UK, fearing the impact of a deep financial ‘crisis’ on the horizon, took unprecedented, interventionist steps to guarantee the debts of financial institutions, and to inject new capital into financial markets. As many scholars have pointed out since then, this was all the more remarkable since such actions were utterly unthinkable during the ‘normal’ course of government in prior years; indeed, the key organising principle for governments of the previous three decades been the need to deregulate the financial system, and to give markets more independence from the state. Yet, once it was clear that we were on the verge of a crisis, state intervention was not only a possible response to the crisis, it was put forward as the only possible response.

Roitman finds the notion of ‘risk’ to be of great interest with respect to the financial crisis of 2007-08, noting that a great deal of modern society is based around ‘risk management’ , the idea of preventing crises from ever occurring. In particular, Roitman notes that in the aftermath of crisis it is often exclaimed that the type of risk analysis undertaken prior to the crisis was inadequate. Yet, as she relates, it is extremely difficult, and sometimes impossible, to establish this inadequacy before the ‘crisis’ events take place.

In fact, one of the great strengths of Roitman’s book is that by analysing how we come to view certain events as being indications of a ‘crisis’, she also sheds light on the way we construct our notion of ‘normalcy’; indeed, both notions – of normalcy and of crisis – are anomalous, yet both have the capacity to be highly manipulative ‘objects of knowledge’ within the political sphere. For instance, in her account of the 2007-08 crisis Roitman reviews the work of some of the most penetrating thinkers of the crisis, including David Harvey, Nouriel Roubini and Martha Poon, arguing that it is not correct to view the ‘crisis’ in 2007-08 as being caused by abnormal ‘errors’ of judgment by policy makers, or by the inherent ‘corruption’ of bankers; rather, the crisis was caused by changes to the construction of the financial system – such as the availability of high-leverage debt ratios – which in the previous three decades had become thoroughly ‘normalised’. In fact, many of these aspects of the system remain ‘normal’ in the post-crisis world of finance today.

In the concluding chapters, Roitman tantalisingly questions whether there are any possibilities for ‘non-crisis narration’. However, she herself ultimately admits that she cannot answer this question satisfactorily – she acknowledges that the dichotomy between normalcy and crisis is so entrenched in academic and political discourse that it is difficult to think outside of it. Roitman’s book nonetheless provides an important account of the dangers of engaging with arguments solely from within a crisis narrative, and she gives the reader much to ponder post-reading. With respect to style, although Roitman’s prose style throughout the book is overly dry and clinical, and in parts sorely lacking in colour, her core argument is so solid and illuminating that it keeps the reader engaged from beginning to end. Moreover, Anti-Crisis is clearly the product of a serious attempt to think outside the usual academic boxes, and as such it deserves much praise. It is to Roitman’s credit, and to the reader’s benefit, that she largely succeeds in her aim to illuminate the notion of crisis as an object of knowledge.