As a senior editor at Nature, Henry Gee has published a number of articles which question the place of Homo sapiens as rightful inheritors of the Earth. In The Accidental Species, he develops this question more fully. Detailed and thought-provoking examples from palaeontology are well-supported by others from diverse fields like cell biology and linguistics. Katarina Gray-Sharp recommends the book to any social scientist (and children of) with even a passing interest in evolution. 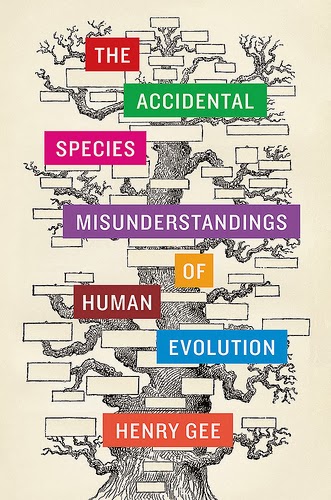 The Accidental Species: Misunderstandings of Human Evolution is Henry Gee’s latest publication. Gee was a full-time palaeontologist (or “bone-botherer”) until 1987 when he joined the staff of top international academic journal, Nature. In addition to his work as one of Nature’s Senior Editors (Biology), Gee contributes independently to scientific thinking through books like In Search of Deep Time (1999). The Accidental Species continues this contribution with a specific focus on human evolution.

The title reflects the primary argument of the book: that human evolution is not a predestined progression, but an unplanned outcome with many more losses than gains. The work draws heavily on Darwin’s (1873) ‘tangled bank’ metaphor where “elaborately constructed forms, so different from each other, and dependent upon each other in so complex a manner, have all been produced by laws acting around us” (in Gee, 2013, p. 12). Gee constructs the bank “in the continuous present …. [where] evolution has no plan…. has neither memory nor foresight…. [nor] vestige of cosmic strivings from some remote beginning” (p. 12). Competition, although not specified in the metaphor, is inherent to Gee’s interpretation. Thus, human beings (Homo sapiens) are but one of those “on the tangled bank of Darwin’s imagination, living alongside and competing with many other species” (p. 94).

The book comprises eleven chapters, a preface, and an afterword. Chapter two defines evolution and discusses its history. Using his Rhode Island Red chickens, modern humans, and sickle-cell anaemia as examples, Gee introduces a number of concepts core to evolution, including natural selection, heritable variation, and the ever-changing environment. An etymology of evolution as a term follows, but fails to explain why we should not revive Darwin’s ‘descent with modification’. It does, however, explain how the original meaning of evolution (as the individual development of an organism) and the term ‘transformation’ (as species-level change) became conflated, constructing a narrative of progressive destiny. Gee blames misunderstandings of Darwin’s tangled bank for such conflation, with natural philosopher Ernst Haeckel as agent provocateur. Having dispelled any conception of evolution as an ever-improving fate, Gee’s final paragraph preludes a discussion of “wholesale loss” (p. 41).

Chapter four focuses on the “Beowulf effect”: the conditioning of contemporary perceptions of history “by those few and arbitrarily sampled fragments that have survived the ravages of time” (p. 61). Moving from the Beowulf manuscript to fossils, Gee develops an argument for reconstruction with limitations. The author explains fossils’ rarity by drawing the reader towards the obvious (that is, most organisms are eaten and/or their remains are decomposed) and less obvious answers (that is, most fossilisation occurs underwater). Examples, like tapeworms, show the fossil record’s limitations; despite relative abundance, tapeworms have no record. Further, the rock material in which fossils can be found is not stable – across time, a large amount of rocks and the fossils therein are lost to erosion and land shifts. Gee closes the chapter with an example: Palaeospondylus, a little fish fossil found in 1890 and continuing to incite debate.

Indeed, the strengths of Gee’s work are the detailed and thought-provoking examples. To illustrate the “calculus of evolution”, the author uses mitochondria, Sacculina (a crab parasite), tuberculosis and leprosy bacteria, mimiviruses, virophages, LINEs and SINEs (pp. 46-50). Each example reinforces the idea that the loss of complexity and independence may be acceptable if it slightly betters an organism’s chance of improving their descendants’ prospects. Other examples help question human exceptionalism. For instance, Gee describes a crow’s use of technology: the smart bird drops stones to displace water allowing food to rise in a beaker. Further, Gee’s account of the Sahelanthropus tchadensis debate not only offers a hominin marker (location of foramen magnum to suggest bipedality), but further understanding of the politics of scientific nomenclature (pp. 94-96). Like the examples, the endnotes are comprehensive and interesting. Reference citations mingle with personal anecdotes and extended explanations. From one endnote I learnt that a hominin is “any species … that is more closely related to modern humans …than to our closest living relatives, the chimpanzees” (p. 174). Gee’s use of examples and endnotes gradually expand the reader’s understanding of the topic.

The author attempts some interesting philosophical engagements. Although the book is exclusively empirical in flavour, he succeeds when articulating the philosophy of science as a field “not about Truth, but Doubt; not Knowledge, but Ignorance; not Certainty, but Uncertainty” (p. xiii). The conditionality of science is exampled throughout, from the rarity of fossil samples to publishing new discoveries which question our understandings of hominins and octopi. Following the line of In Search of Deep Time, Gee’s analysis rails against received knowledge whilst embracing the unknown.

Although exceptional in many ways, there are areas where improvements could be made. A short introduction to genetics would increase comprehension for the reader new to evolution. Consideration of monocultural approaches to modern humans may edit out generalised descriptions by body fat (p. 118), and similarities between primate-human (p.74) and bird-human behaviours (p. 137). Heavy with three-plus-syllable adjectives, the writing sometimes lacks a discernable logic (for example, in chapter two’s timeline). However, my greatest frustration was with chapters six and 11. Essentially a summary, chapter six spends an inordinate number of pages discussing “creationists” (p. 101). Chapter 11 analyses Cartesian theatre and self-awareness, whilst declaring the self “illusory” (p. 164). The detailed examples are abandoned alongside the book’s argument, only to be picked up again in the afterword. With some editing, chapters six and 11 would blend into a splendid final chapter.

Despite these criticisms, The Accidental Species should be a welcome addition to the bookshelf of any social scientist with an interest in evolution. Recent work in the area, including National Geographic’s Genographic Project, highlights imaginations captured by prehistorical ancestral roots. Gee’s writing provides background for the curious newcomer. Offering high readability and large dollops of humour, our 10-year-old read a chapter to me when I was driving. Recommended.

Katarina Gray-Sharp is an academic at Massey University, New Zealand. She has published in women’s health and housing, and co-edited a volume on public policy and New Zealand’s founding document, the Treaty of Waitangi.  Her latest chapter develops and applies principles to a historicized Academy. Katarina blogs in the educational subject area, and you can find her on Twitter @TeachingConsult. Read more reviews by Katarina.