Iraq has been racked by ethnic and sectarian conflict, which intensified following the American invasion and continues today. In this book, Haider Ala Hamoudi explores how the country was able to draft a constitution that appeals to the country’s three main sects despite their deep disagreements. Illuminating the aims of the text and acknowledging the continued discussions after a constitution is ratified, the author emphasises the ‘negotiation’ in Negotiating in Civil Conflict, writes Ruth Houghton. 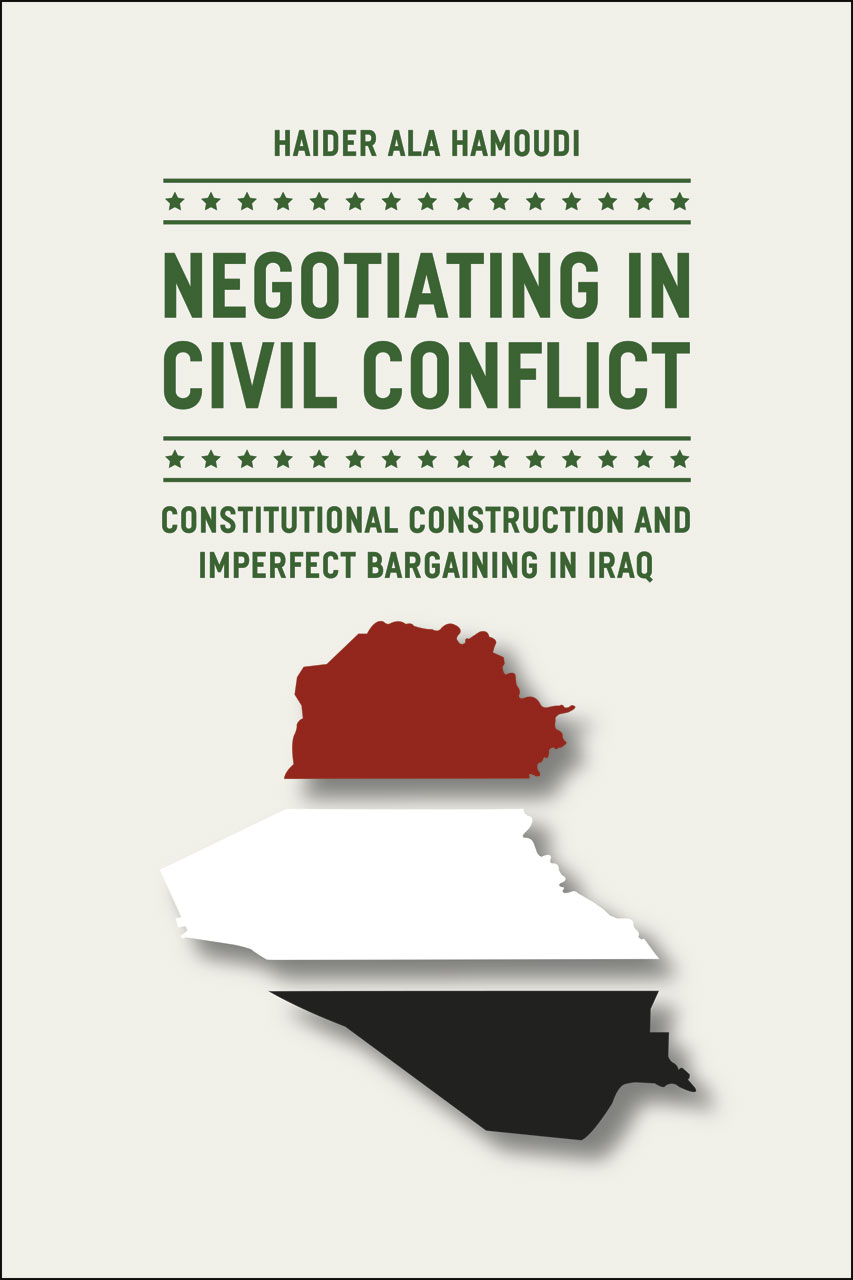 How do you draft a constitution if one group is committed to ‘strict majoritarian principles’ and Islam, a secular group wants to preserve an autonomous region, and a third group sees regionalism, and ‘identitarian commitment’ as threatening national unity? (p. 57) Such were the disputes between the Sunni, Shi’a and Kurdish communities in 2005 when Iraq began to draft its Constitution. Divided on the understanding of the state, the relationship with religion and historical context, disagreements between the groups meant that the Sunnis refused to continue negotiations and the referendum adopting the Constitution was strongly opposed by them. Yet, by 2014, the Constitution in Iraq has a role in creating Iraqi identity, those factious groups now claim loyalty to the Constitution, and they rely on its text in their arguments.The question Haider Ala Hamoudi asks in Negotiating in Civil Conflict is why the Iraqi Constitution was so successful.  Using unique primary resources, collected at the time of the negotiations, and Hamoudi’s personal experiences as an adviser to the Iraq Constitutional Review Committee in 2009, the book goes behind the scenes at the negotiations, investigates the aims and motives of the delegates, and starts to read between the lines of the Constitutional text. Vague or capacious text creates gaps and allows for more flexible, post-ratification discussions between groups. Hamoudi argues that the success of the Iraq Constitution lies not in the formal amendments proposed by the 2009 Constitutional Review Committee, but in ‘incremental constitutionalism’ (Hanna Lerner, Making Constitutions in Deeply Divided Societies).

‘Incremental constitutionalism’ allows for post-ratification developments through further discussions between disagreeing groups. In Chapter 1, the techniques that allow for further construction of a constitution are outlined. Formal amendment procedures are criticised for being slow and cumbersome. In the Iraq context, consensus between the groups had already been found and so the report of the Constitutional Review Committee in 2009 was too late. Instead, language which is ambiguous, contradictory or aspirational is used. These specific language tools are used in the text of the Constitution to provide the necessary flexibility for these discussions to continue. Chapter 3, ‘The Capacious Framework Text’, explores how some of these tactics are used within the Constitution.

Five examples of controversy are highlighted to demonstrate how certain questions were left to be resolved later. Stalemates arising from questions of federalism, Islam and the state, de’Baathification (the removal of Saddam Hussein’s Ba’ath Party), the Shi’i majoritarianism, and Kurdish autonomy in Kirkuk are overcome using these specific language techniques. Hamoudi explores these ‘linguistic niceties’ by engaging with the particular Arabic meanings of words and their historical and cultural context.  In determining the nature of the protection afforded to Islam by the state, the United Iraqi Alliance preferred ‘guarded’, but this was considered too strong by the secularist Kurds and yet, ‘respect’ was not strong enough for the Shi’a. The use of ‘sustaining’ then is a clear compromise between these groups (pp. 98-99).  Paradoxically, the success of the Constitution is most apparent when questions of federalism have been addressed using contradictory language. Whilst Article 115 of the Constitution provides that local laws will trump federal law, Article 122(1) limits this power, maintaining that that the authority of the provinces is organised by the national legislature (p. 77).

With all these contradictions and ambiguities in the text, the credibility of the Constitution could be undermined. An uncertain legal text can result in ineffective administration, and in Iraq this ineffectiveness can be seen in the lack of rules on oil and gas fields (p. 72). Hamoudi’s pre-empts this critique in Chapter 4, and highlights the important areas of agreement such as the acknowledgement of human rights and civil liberties or the decision to give the Kurds autonomy. It was agreed that the Kurds would have an autonomous regime, but tensions arose in relation to the extent of this autonomy and how to provide for other minority groups. Hamoudi seeks to show that despite the remaining gaps in the text, the drafting of a constitution is a significant and symbolic event in history; it can generate the creation of an identity and reconcile divided groups (p. 124). However, this approach rests on the assumption that the inclusion of minority groups after the adoption of the constitution is sufficient (p. 19). Other disputing groups in different countries might not be as willing to participate in further discussions.

Chapter 5 and Chapter 6 deal in detail with two of the more controversial areas, federalism and the role of Islam to show the extent to which discussions have progressed. With the Kurdish government accepting a constitution that prohibits legislation which is incompatible with Islam’s ‘settled rulings’, questions concerning the role of Islam in the state have been the most successful. The importance of Chapter 6, ‘Post-Ratification Consensual Construction beyond Federalism’, is that it moves away from the Constitution text and towards the jurisprudence of the Federal Supreme Court. The Court shows sensitivity to the role of Islam in legislation, sidestepping questions by focusing on procedural irregularities or it choosing to act more provocatively in less controversial areas, such as commercial law. This approach satisfies members of the Shi’a clergy, and diminishes the controversial nature of the relationship between legislation and Islam.

On 27th January 2014, Tunisia adopted an unfinished and ‘schizophrenic’ constitution. Acknowledging the incremental progression of constitutions and by interrogating the specific language used in the constitution, Hamoudi’s approach in Negotiating Civil Conflict provides a frame to address these initial criticisms. In the final chapter, ‘Broader Lessons’, Hamoudi had suggested that this more flexible method of incremental development could be used in the Egyptian, Tunisian and Syrian constitutions. As Hamoudi diligently and expertly outlines the historical context of the particular party fractions in Iraq, applying the frame of ‘incremental constitutionalism’ to Egypt, Tunisia and Syria would require more investigation into the political history than the book provides. This political, historical and cultural background is crucial to inform a reading of the negotiations. Illuminating the aims of the text and acknowledging the continued discussions after a constitution is ratified, Hamoudi emphasises the negotiation in Negotiating in Civil Conflict.

Ruth Houghton is a Graduate Teaching Assistant and PhD candidate at Durham Law School. Her research centres on the democratisation of international institutions. Her current research focus is on the UN Human Rights Council with a particular interest in politicisation. Read more reviews by Ruth.