In this book, Alexander C. T. Geppert considers how modernity was created and displayed at imperial expositions held in fin-de-siècle London, Paris and Berlin. Focusing on five such expositions – the Berliner Gewerbeausstellung (1896), the fifth Parisian Exposition Universelle (1900), the Franco-British Exhibition in London (1908), the British Empire Exhibition at Wembley (1924/25), and the Exposition Coloniale Internationale in Paris (1931) – this book focuses on their specific aims and aspirations, evolving forms and execution, and the public debates they engendered. Sophie Franklin finds this book an ambitious and engaging study that also provides a fresh close reading of the contemporary impact and urban legacy of the complex network of exhibitions.

The simultaneously transient and permanent nature of imperial expositions is explored in Alexander C. T. Geppert’s Fleeting Cities. In its unravelling of the intricacies of fin-de-siècle expositions, the book not only places five case studies within an exhibitionary web but also locates itself within current academic interest in exposition analysis, which includes such recent publications as Paul Young’s Globalisation and the Great Exhibition (2009). Fleeting Cities offers a unique close ‘reading’ of the five imperial exhibitions, within which their ‘widespread networks’ and ‘interrelations’ emerge to represent the cultural aftermath of expositions and their still-detectable social and geographical impact on cities and modernity (p.12).Expositions were used frequently as ‘arenas for international competition’, providing spaces in which cities could showcase their superior modernity and position themselves within a global hierarchy of civilisation (p.14). Such competitive displays of wealth and power can still be seen in the ‘analogous’ modern Olympic Games, which thrive on the obligation of surpassing ‘all preceding ones’ (p.204). In light of the controversial Sochi Winter Olympics, and its status as reportedly the most expensive in the Games’ history, this correlation is especially timely.

The first city exposition to be ‘read’ by Geppert is the Berliner Gewerbeausstellung (trade exhibition) of 1896, which occurred despite numerous set-backs. Unlike the other four expositions analysed in Fleeting Cities, Berlin 1896 was not international, thereby placing a question mark over the city’s position as an urban metropolis. These fears were crystallised in the phrase Ausstellungfrage, which translates as ‘the German exhibition question’ (p.17). This ‘exhibition question’ involved sporadic debates in the media as to whether Germany should, or could, host an international exposition, in which the pros and cons were laid out only to be rejected abruptly by Kaiser Wilhelm II. The 1896 national exposition was a compromise. It was hoped that Berlin 1896 was the precursor to a universal exposition; yet this failed to materialise. Despite its national success, the exposition’s ‘belatedness and lack of sophistication’ (caused largely by its failure to include other nations) prevented Germany from positioning itself alongside urban heavyweights such as Paris and London within the global exhibitionary network (p.59).

Colonial exhibitions played an intrinsic role in the exposition movement, catalysed by the imperialistic nature of London’s Great Exhibition in 1851. Berlin 1896 was no exception and its own imperial exhibition (Kolonialausstellung) was one of its main attractions, not least because it put “natives’ on display’ (p.47). Not only did these imperial strands seek to justify colonisation to visitors and to ‘appease’ political critics, they also aimed to demonstrate a country’s success as an Empire, thereby perpetuating international rivalry. In Berlin 1896, the “nations in Europe who are major powers […] are also colonial powers” was its imperial exhibition’s ‘legitimising slogan’, linking universal clout with imperial dominance (p.45). As Geppert summarises neatly in the book’s detailed conclusion: ‘expositions were considered central to progress, progress was considered central to Western civilisation, and hence expositions central to each individual nation’ (p.203).

In Chapter Three, Geppert turns to the Exposition Universelle Internationale de 1900 à Paris as the nineteenth-century exposition’s ‘protean synthesis’, in which the world would ‘be put on display to an extent hitherto unknown’ (p.62). He claims that the 1900 exposition was ‘impossible to grasp in toto’; yet this chapter skilfully navigates the theoretical complexities integral to the discussion of expositions (p.63). Whilst the book adopts a multitude of metaphors in relation to imperial exhibitions, the most evocative (and, as Geppert notes, the most ‘overwrought’) is that of a palimpsest or tabula rasa (p.65). The location of an exposition is transformed into a text or slate upon which memories and meanings can be written and rewritten, connoting both the ephemeral nature of expositions and their permanent, often unseen, urban legacy. For Paris, its prime locale for exhibitions was the Champs de Mars, which still contains inheritances from past expositions such as the 1889 Eiffel Tower and the Grand and Petit Palais of 1900 (p.65). Even Champs de Mars’ ‘obscure origins as a former swamp’ harbours significance, contrasting the space’s primitive past to the civilised and modernised urban metropolis that was built over it (p.65).

The palimpsest metaphor also relates to the concept of a micro city within a macro city that characterised many of the fin-de-siècle expositions. In Chapter Five, London’s British Empire Exhibition of 1924 at Wembley is explored with particular attention paid to its clou (star attraction), the Government Pavilion, a ‘bluntly propagandistic’ endeavour that represented the British government’s inner workings (p.157). At the centre of the Government Pavilion was a large-scale map of the world with Britain’s Empire illuminated in red: this was the exhibition’s ‘heart’ (p.161). Since London acted as the British Empire’s core, the ‘heart’ of Wembley 1924 acted as London’s micro representative. The Chinese box of this “heart of the heart of the heart of the heart” testifies to the complex layering inherent in the study of exposition and its theory (p.161).

This embedded ‘cities within the city’ nature of expositions is further examined in the book’s conclusion, which sets out the three levels of ‘the exposition and the city, the exposition as city, and the city as exposition’ (p.222). Within this triad, the intricate overlap and connection between the development of cities and the innovation of expositions is expressed explicitly. In the lengthy conclusion, Geppert also introduces Bakhtin’s ‘chronotope’ concept, ‘fictional sites where different times and spaces’ are interwoven and ‘compressed’ then ‘sold’ to spectators (p.245). This encapsulates the essence of expositions; yet it may have been more useful to include this in the introduction, thereby further enriching the reader’s understanding throughout the book.

Despite this minor point, Fleeting Cities offers an ambitious and engaging study of imperial expositions of fin-de-siècle Europe, tracing the medium’s nuances and numerous metaphors, and succeeding in its premise to provide a fresh close reading of the contemporary impact and urban legacy of the complex network of exhibitions. 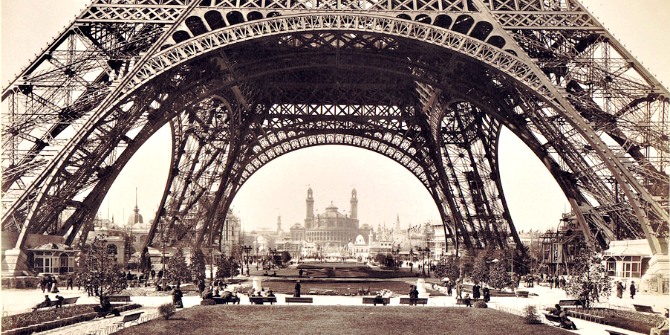