Participation in democratic processes has fallen significantly in recent years, a decline Quentin Kidd believes to be associated with changes in citizenship, the political economy and the public sphere. This is a book focused on the United States that has great relevance for Britain and the rest of Europe, writes Nick Hayward, although there are questions around the author’s reluctance to address the importance of social and economic inequalities in the debate about falling participation. 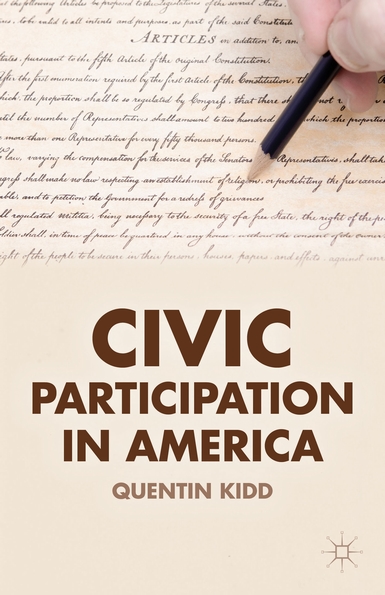 Whilst Europe and America have been gripped by economic crises over the past few years, Kidd’s book reminds us of the ongoing debate about a deepening political crisis in the West, as evidenced by the continuing decline in voter turnout, particularly amongst 18-30-year olds. Although the book focuses on the United States of America, it addresses questions equally relevant to European democracies (see, for example, a recent study sponsored by the Institute for Democracy and Electoral Assistance available. Kidd’s particular insights also bear contemplation within the European context as he locates the reasons for the demise of civic engagement in developments, some of which have been part of the British, if not wider European, experience over the past few decades.   Kidd is especially qualified to engage this debate having helped devise and deliver a new youth civic engagement programme hosted by the Sorensen Institute for Political Leadership at the University of Virginia.

The book’s central contention is that the decline in voting, and in political engagement more generally, over the past few decades, has to be understood in the context of wider societal changes, which have ‘affected the motivations of individuals to participate in the civic life of their country.’ (p. 29). Changes in three key ‘institutions’, as Kidd calls them, are central: citizenship, the political economy and the public sphere.

On citizenship, Kidd highlights a shift from the sort of Aristotelian concerns for individuals with the attributes best suited to the responsibilities of citizenship to the modern day, legal definition of citizenship, which accords rights and privileges to any qualifying person, irrespective of considerations of the responsibilities that are said to attach to citizenship and how those citizens might be ‘trained’ to fulfil their civic duties. On the political economy, Kidd argues that the transition from the agrarian economy, which fostered a greater sense of interdependency and community through trade, to an industrial economy that prioritises consumption and promotes self-interest, has contributed to a decline in public-mindedness and the notion of a common good.  The expansion of the public sphere and the role of government has been a disincentive to community engagement in the way that the state has taken over ever greater responsibilities and has removed much decision-making from citizens, thereby rendering unnecessary some of the community-based activities that would have seen groups come together for the purposes of solving some of the problems they confronted.

Kidd concludes with a consideration of how the agents of socialisation – the family, the school and the media – have been unable to play their part in halting this decline in civic-mindedness and then offers some brief suggestions on what might be done to remedy the situation and re-vitalise a sense of civic duty amongst America’s young people. One assumes that these proposals come from the author’s practical work with the Sorensen Institute and one wonders what success has been recorded given that the call for a ‘civic entrepreneurship’ which ‘applies the skills and knowledge of a business enterprise , which is orientated toward the maximisation of private profits , to the social and civic world’ (p. 164) does echo the ‘third way’ politics of the Clinton-Blair style that sought  to make the public more like the private for the good of society and yet did nothing to slow down, let alone reverse, the widening social and economic disparities in America and Britain that can so corrode the fabric of society. Elizabeth Gudrais is just one American commentator to have raised awareness of the research that shows how fundamentally destabilising such inequalities are. Commenting on research into life expectancy by the Harvard School of Public Health, she acknowledged that:

A different approach to the question of political engagement might suggest a redefinition of civic duty based on the concerns and aspirations of the 21st century younger generations that are so disengaged with, but not disinterested in, the political world rather than returning to some sort of ‘originalist’ definition of the late 18th century. Kidd’s belief that, ‘the political system listens closely to those who speak up and limitedly to those who do not’ (p. 151) would not ring true enough to encourage many young people to engage. Political scandals, opinion polls, academic research all speak to the disintegration of trust in many political institutions and many young people believe those institutions really only listen to a minority of powerful and influential interests. In consequence, only change of a more fundamental and radical nature might appeal to young people. Judging by the reactions of my own undergraduates, the outspoken sentiments of the once young and recent ‘bad boy’ of alternative culture, Russell Brand, during a recent BBC interview, spoke more meaningfully to some of their concerns about civic engagement.

The principal focus of the book on how institutional developments have impacted on civic engagement certainly makes this a valuable contribution to the debate about the health of democracy, and not just America’s. Of course, it will speak particularly to students of American society but it is a well-written study that should be of much wider interest. It offers an object lesson in scholarly style with its clearly-structured and systematically developed set of arguments.

Nick Hayward is Programme Director and Principal Lecturer in Politics at Northumbria University . Between 2002-03 Nick was Visiting Associate Professor in the Department of Political Science, State University of New York in Fredonia, USA. Read more reviews by Nick.