This book aims to provide an introduction to the shared history of modern medicine and imperialism – spanning three centuries and covering British, French and Spanish imperial histories in Africa, Asia and America. Pratik Chakrabarti explores the major developments in European medicine from the seventeenth century to the mid-twentieth century, showing that the major developments in European medicine had a colonial counterpart and were closely intertwined with European activities overseas. Sally Brown finds this a very readable book with a vast array of information packed into it and recommends it to anyone interested in exploring the history of medicine. 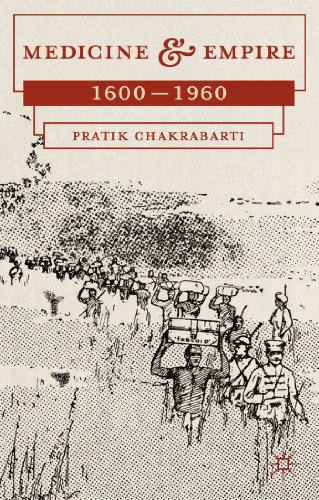 The book sets out to show, through a close examination of a number of related topics, how the history of modern medicine is closely intertwined with the history of imperialism. Developments in medicine in the main European colonising nations both fed into and benefitted from the building of empires. The book covers just over three centuries, and focuses on British, French and Spanish imperial histories in Africa, Asia and America, although the Dutch and Portuguese, who were early empire builders, also feature in the story.

In his introduction, the author sets out his two main aims: to appreciate the history of medicine on a global scale, and to provide some historical context for the problems faced today by global health. He also sets out a structure of four broad historical periods: the age of commerce (1600-1800), the age of empire (1800-1880), the age of new imperialism (1880-1914), and the era of new imperialism and decolonisation (1920-1960). However, having established what appears to be a clear framing device for the undoubtedly complex discussions which are to follow, he then rarely refers to these ages again. The ten chapters which follow are based on topics such as plants and medicine, the colonial armed forces and the development of navies, climate and race, and tropical medicine, and it is not always clear how or where parts of each chapter fit into the framework of ages set out at the beginning. Although each chapter is individually very interesting, it might have been helpful in terms of getting a sense of how times changed to have placed them more clearly in the framework.

There is a huge amount of detailed information packed into this book, and it is thoroughly and comprehensively referenced, enabling the reader to follow up on many issues. Given the amount of information presented, and the detail of such things as numbers of people moving about the globe, impact of certain diseases on death rates (most notably amongst Indigenous peoples after the arrival of Spanish conquistadors), it might have been helpful to have presented some of the information in tables and figures. Maps would also have been helpful; although there are some reproductions of lovely old maps, some clear maps setting out the size and scale of the various empires, and the movement of people, would make some sections visual and immediate. Similarly with the exhaustive lists of who went to war with whom, and when – at times it becomes quite a feat to keep up with exactly who was fighting whom and for what.

However, these are really only minor quibbles with what is essentially a vast array of information packed into quite a short and very readable book. There are some fascinating and curious details, such as the stories of the surgeons who travelled on ships to the West Indies, who not only became involved in treating pirates and privateers, but also benefitted from some of the booty from piracy, several becoming quite rich in the process.

The role played by spices and plants in developing trade initially, and then medicine, is critical. One of the early chapters sets out how the search for new trade routes by the British and Spanish, essentially to secure their own supplies and cut out the Italians and Arabs who controlled spice routes from the East, led to the great exploring age and ultimately was the beginning of empire building. Having discovered the lands where tobacco, coffee, pepper and opium, amongst other things, could be found, colonisers then went about securing their supplies, either by claiming the land, or by developing plantation approaches to growing. This then led to the need for labour to work the plantations, leading to the vast movement of people around the globe as slaves. Both the transport of slaves and the need to move large military forces around the globe to fight wars and to secure empires also led to the movement of diseases, and a need to cure them, not least for reasons of commerce and military might. At the same time that the Public Health movement in Britain was emphasising the need for sanitation and hygiene at home, navy surgeons were promoting cleanliness as a vital component in the health of sailors. Given that eighteenth-century military mortality was caused more by disease than war, with more soldiers and sailors dying from diseases such as yellow fever, scurvy, and dysentery than in battle, this was clearly important.

As the author states (96), ‘disease and death were the undesirable but inescapable consequences of imperialism’, but also ‘the global spread of epidemics transformed modern medicine and led to the birth of modern public health’. The two-way traffic of this story is made clear throughout the book, at least for those countries who were the colonisers – their activities spread diseases and led to their own people (mainly military) suffering, but at home they benefitted from new drugs, new treatments and the experiences of those who travelled the world.

The book places medicine in the economic, military and ultimately political contexts of imperialism, and leads into a concluding chapter which discusses modern global health problems with a clear sense of the long history behind them. This is a very readable text, and should be of interest to anyone wanting to explore the history of medicine. However, this is not just a history book. There is plenty of food for thought about how we currently deal with HIV, SARS, quarantine and many other issues troubling the modern world.

This review gives the views of the author, and not the position of the LSE Review of Books blog nor the London School of Economics.

Sally Brown is a Research Fellow in the School of Medicine, Pharmacy and Health at Durham University. Her research interests include young people and sexual health, men’s health, and lay knowledge and understanding about diagnosis, risk and decision-making.

Posted In: Africa and the Middle East | Asia | Britain and Ireland | Europe and Neighbourhoods | Health and Wellbeing | History | Sociology/Anthropology | USA and Canada