Medicine at the Border looks to explore the pressing issues of border control and infectious disease in the nineteenth, twentieth and twenty-first centuries. Chapters cover mandatory HIV testing, the formation of the WHO, biosecurity and public health governance. Iro Filippaki recommends this collection to health researchers and historians.

Medicine at the Border: Disease, Globalization and Security, 1850 to the Present. Alison Bashford (ed). Palgrave Macmillan. 2014.

With Ebola having reached the West and slowly being identified not just as an epidemic, but also as the border between the west and the east, between the privileged and the unprivileged, and the catalyst that designates successful healthcare (or not), the publication of this collection is relevant to how we, as citizens, manage our health and are managed by institutions looking to preserve global safety and health.

Medicine at the Border is divided into three parts, each dealing with a hot topic in contemporary global society. This structure helps readers to navigate through contested and complicated ideas such as immigration, tropical medicine, and mandatory testing. The fact that each of the thirteen chapters comes with a complete bibliography makes this book invaluable to medical humanities researchers, and also to general readers looking to gain insights into the politics of disease management.

The notions of global health and national security are quite controversial terms that all writers in this collection grapple with. As editor Alison Bashford states in Chapter 1, we live in the ‘age of universal contagion’ (1), which positions diseases as much more than just body-related afflictions. Rather, they allow us to illuminate the connections between politics, medicine, and human rights. Through the chapters we hear from many informed researchers and academics, who can be identified as having expertise in the following areas: the relationship between politics, geopolitics and disease prevention; the presence of racial exclusion on health/ disease grounds; and the event of surveillance and monitoring as disease prevention. 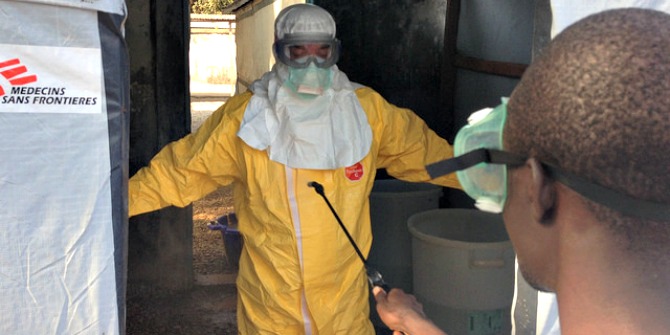 Hard as it may be to distinguish among so many well-written, informative articles, it would nevertheless be accurate to state that some of the most important points of this book are drawn by Renisa Mawani in Chapter 8, ‘Screening out Diseased Bodies: Immigration, Mandatory HIV Testing, and the Making of a Healthy Canada”. In her article, Mawani discusses Michael Hardt, Antonio Negri, Zygmunt Bauman and Etienne Balibar in a medical humanities feast of concepts and successfully links the spreading of infectious germs with the spreading of capitalism: ‘Global flows of knowledge, capital, migrant labor, and travel — and the rapid speech at which these now occur — have opened up even greater possibilities for the transmission of germs and disease’ (136). Immigration issues and what it means to be an immigrant or a refugee in this global day and age are unswervingly inscribed in the infectious disease discourse and, in the case of Canada, Mawani argues that ‘race and racism continue to underpin Canada’s immigration law’ (139) and questions the notion of ‘racelessness’ in the time of health screening. Mawani makes a compelling case in point when she discusses ‘the economic discourse of immigration and health care that has been used to justify mandatory testing for various diseases [which] becomes particularly problematic in the context of HIV/AIDS’ (p.150). According to Mawani, prospective immigrants are the only set of individuals in Canada that are required to go through HIV testing; these individuals are seen ‘as posing an excessive demand on the health care system’ and that contributes to ‘a racialized narrative with historical roots’, through which ‘racialized (black) bodies that come from specific regions of the world’ are denied entry in Canada (150). Mawani’s fair point is that through the economic rationale of this argument, the humanitarianist purposes of disease management are lost in what she calls ‘a politics of denial’ when it comes to race (154).

Conversation about how ‘race’ is a dirty word when it comes to infectious disease management is boldly built up throughout the book, peaking with references to Donna Haraway’s notion of the cyborg and Michel Foucault’s discussion of biopolitics, which add another level to the argumentation on national security and biosecurity. These ideas are carried forth with Miriam Ticktin discussing French disease management in Medical Humanitarianism in Chapter 7, ‘Beyond France: Breaking Down or Patrolling Borders?’ Through stimulating discussion on the suffering body and its problematic ‘apolitical status’ (p.118) within the framework of medical humanitarianism, Ticktin concludes that today’s ‘universalist ideology also grounded the colonial enterprise’ that can and does ‘maintain structures of racial and economic exclusion’ (126). Ticktin’s harsh but just critique of medical humanitarianism is based on its assumption that ‘humans are equal, free and rational from birth’; an assumption that, as the author brilliantly claims, ‘ignores the specific cultural and psychological conditions woven in as preconditions for the actualization of these capacities’ (130). It is a shared view in the collection that medical humanitarianism combined with global policies for supposed security is to be held accountable for the accelerating medical and social screening and quarantine methods, and it is summed up by Ticktin in her statement that ‘medical humanitarianism embodies a universalist ethic that enables border crossings [and] that enacts a notion of (apparent) equality’ within which ‘individuals can only cross — and remain on new territory — as specific types of limited subjects: in refugee camps, and in France, for instance, as sick or suffering bodies’ (131). Finally, in Chapter 6 it is brought to the reader’s attention that in this framework the human subject is merely identified by its suffering and that the ‘political, social, cultural, economic and religious’ identity of the subject ‘remains suspended at the border’ (131).

Summing up, as the London Times increasingly discusses Ebola infection in relation to the security of the Western world and nurses in Los Angeles and Dallas protest about Ebola management, the present articles engage in dialogue with one another and topically foreground a historical account of disease management that will enable the reader to ponder critically about their global present.

Iro Filippaki graduated from the English Literature department in Athens, Greece in 2009, completed her MA on Ideology, Politics and Narratology in 2011 and is currently a PhD student at the University of Glasgow in Medical Humanities, where she is researching body and language politics in WWII metanarratives.