How influential has the Nazi analogy been in recent medical debates on euthanasia? And what does the tragic history of thalidomide and its recent reintroduction for new medical treatments tell us about how governments solve ethical dilemmas? In this book, Sarah Ferber aims to demonstrate the importance of the historical dimension of bioethics at the crossroads between medical science, the pharma industry, government regulations, and patient rights. Catherine Hezser finds this book a thoroughly researched and balanced introduction to bioethics discourse and its historical foundations, and recommends it to students of the history of medicine, politics, the pharma industry, and social and philosophical ethics. 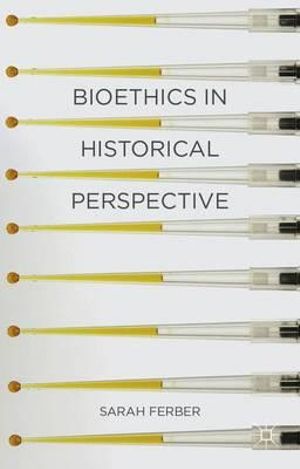 In the course of continuous developments in medical science, bioethics has become a complex enterprise conducted by a variety of institutions and groups with different motivations and interests. Sarah Ferber, who is an Assistant Professor of History at the University of Wollongong, Australia, and a member of the regional Human Research Ethics Committee, provides an introduction to the historical dimension and the social, political, and economic contexts of contemporary bioethics debates, based on a course she taught at the University of Queensland for the last fourteen years. She argues that “bioethics has become one of the defining political arenas of the twenty-first century” (p.164). A proper understanding of the ongoing debates and issues is possible only on the basis of our knowledge of its history. Therefore historical research must be considered a “key part” of bioethics discourse, for finding answers as much as for posing the right questions. Since “no single history of bioethics” (p.4) can be written, many different approaches and perspectives have to be taken into account. The aim of the book is “to provide insights into both the history of bioethics as a social practice, and into the wider history of medicine in its social context” (ibid.).

In the history of bioethics the Nazi period, eugenics, and euthanasia play an important role and constitute one of the focal points of this volume. Ferber analyses the context in which the Nazi debates and practices developed and examines the limits of analogical reasoning. In 2009 criticism of Obama’s health care system elicited allegations of the Nazi euthanasia program. The term has also been applied to “physician-assisted suicide” in Australia, the Netherlands, and Belgium. Yet the circumstances are entirely different: whereas the latter is practiced in democracies and usually based on the patient’s free choice, the Nazis killed people in the context of a totalitarian regime. Euthanasia and eugenics were closely linked to the nationalist ideology which placed governmental manipulation of collectivities over individual choice and benefit. The “slippery slope” argument, which maintains that modern health care centres can become “killing centres” for economic reasons, needs to take the different circumstances into account. Countries which have legalised physician-assisted suicide were not motivated by the desire to rationalise health care but to safeguard the rights of the terminally ill.

Reproductive medicine is another area in which bioethics discourse has stepped into a minefield. Here, too, Nazi period eugenics is often used as an analogy to contemporary practices of embryonic selection.  Although the author generally sees little overlap between the two, she considers it necessary to discuss problematic aspects related to “government wariness of health-care costs” (p.70). PGD (preimplantation genetic diagnosis) of embryos within three days of fertilization, offered by IVF clinics in the U.S. and other countries, is meant to detect abnormalities and prevent the birth of children with severe physical and/or mental conditions. The use of PGD and the termination of a pregnancy is the parents’ free choice. Yet the government could profit financially if less children with expensive to treat conditions were born. In some countries PGD is also used by parents to determine the sex of their child, that is, for “discriminating priorities” (p.86). This may eventually lead to significant social problems as the case of China has already shown. Bioethics discourse needs to be aware of tensions between the availability of medical technologies, individual choice, legal issues, and equity. In the case of compulsory genetic screenings of embryos, introduced in China and Taiwan in the 1980s and 90s, it is difficult to determine whether we are dealing with “a public health issue or a political measure” (p.94): are abortions carried out to prevent suffering or to enhance the family’s or nation’s offspring? The use of PGD for genetic enhancement may also create a socio-economic divide between poor and wealthy families and countries so that ”possible deleterious social consequences” may arise (p.96).

The third area of ethically relevant medical intervention discussed in this book is human experimentation. Medical science “requires a balance of risk and benefit” (p.101): in the development and testing of new medicines and procedures, research subjects may be harmed. Ferber notes that the decision whether something is ethical or unethical “can only ever reflect a broad moral consensus which by definition cannot be unanimous” (ibid.). She outlines the long history of ethical breaches in human experimentation, especially in Nazi medicine, which led to the Nuremberg Code of 1947. The principles set down there, including the subjects’ voluntary consent, have no legal authority, however, and their influence remains disputed. By offshoring human experiments and by paying individuals to serve as human guinea pigs regulations can be circumvented.

The media have often exposed problems to a wider public, such as the thalidomide case in the early 1960s: a medication marketed to pregnant women to cure morning sickness led to numerous foetal deaths and the birth of infants with severe disabilities. The fact that this drug was reintroduced under another name for HIV/AIDS, cancer, and leprosy treatment in the 1990s indicates “the limitations of regulatory frameworks, with free-market advocates and patient groups unified in arguing that informed consumers can make their own decisions” (p.133). This case also indicates the conflicting agendas of activist groups: whereas some activists want more trials and stricter regulations, others demand quick access to drugs whose long trial period has not been completed or unveiled ambiguous results. In large countries such as India the monitoring of drugs is difficult if not impossible. These issues show that the “ethical debate is intrinsically woven into the very fabric of clinical practice” (p.151) and has important implications for broader international “bio-politics”.

This thoroughly researched and balanced introduction to bioethics discourse and its historical foundations deserves a wide readership beyond those who are interested in medical science. Students of the history of medicine, politics, the pharma industry, and social and philosophical ethics will equally benefit from reading the book. In an appendix the author provides a condensed version of the Bioethics Research Library Classification Scheme of the Kennedy Institute of Ethics Library at Georgetown University in Washington D.C.

Posted In: Health and Wellbeing | History | Law and Human Rights | Philosophy and Religion