Stitched Up considers the environmental, social, and psychological ills that the fashion industry inflicts upon all of us. The Rana Plaza collapse in Bangladesh in 2013 brought ethical pay and safe working conditions to the world’s attention, but Tansy Hoskins argues that much more needs to be done. However, Scarlett MccGwire is disappointed that Hoskins doesn’t deliver on how we can achieve a real revolution in clothing manufacturing and buying. 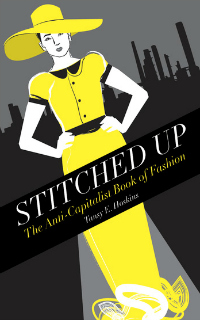 Stitched Up is exactly what it says on the tin: an anti-capitalist take on the fashion industry. Campaigning journalist Tansy Hoskins reminds us of the Rana Plaza disaster which killed over a thousand Bangladeshi garment workers last year, the ecological destruction that fashion wreaks, and the effect of airbrushed beauty on the self-esteem of millions of women.

As ‘fashion is capitalism’s favourite child’, Hoskins pulls no punches in her savage critique of the industry which encapsulates the worst of the system. Thoroughly researched with a reach extending both globally and historically, the book is packed with interesting examples, and Hoskins’ engaging style makes it eminently readable, yet most of the arguments are well rehearsed.

Fashion is big business. Globally it is worth over a trillion dollars, employs over 26 million people, and has a greater range of mark ups than any industry. Hoskins shows that most of the plethora of brands are part of conglomerates with billionaire owners; whether it be haute couture, luxury goods, or the mass market makes little difference. The fashion media, dependent on advertising, is dutifully sycophantic, particularly as critical journalists find themselves banned from catwalk shows. Even the glorious independence of the internet has waned as the most successful bloggers have been bribed and bought up by the big boys.

The picture gets darker. Hoskins rigorously takes us into the exploitative sweatshops of child labour and pitiful pay. The Rana Plaza collapse killed 1,113 and injured another 2,500, many disabled permanently. This illegal eight-storey building produced clothes for Benetton, Bon Marché, Mango, Matalan, Primark, and Walmart. While the hundreds of Bangladeshi garment workers who had been killed in the preceding months had been ignored, front page headlines meant that international union IndustriALL managed to get the manufacturers round the table to demand basic conditions.

The pay of garment workers could be doubled without a noticeable impact on the price of clothing: they account for less than three per cent of the cost. Hoskins cites the Reiss (‘serial sweatshop offender’) dress which Catherine Middleton (Hoskins’ nomenclature) wore to the White House – made by Romanian women paid 99p an hour, but retailed at £175. Had their wages been doubled, the dress would have cost just £178.15. She is clear about the reason: ‘under capitalism corporations must compete with each other to maximise profits and satisfy shareholders and investors. Costs are therefore compressed as far as possible.’

The book documents the ecological evils which fashion perpetrates on both animals and the environment – from the slow death of crocodiles for those wretched handbags to the draining of the Aral Sea to irrigate Uzbekistan’s cotton fields. Yet Hoskins refuses to blame us, for Marx said: ‘the consumer is no freer than the producer. His judgement depends on his means and his needs.’

Indeed Hoskins sees us all as victims, whether the exploited sweatshop worker, the impoverished woman suffering both the shame of poverty and that of not keeping up appearance requirements, or even the models. They are young, foreign and starved, so it is hardly their fault that their beauty is used to make the rest of us feel inadequate and spend money on products in the vain hope of achieving perfection – which of course is the point.

If your reviewer sounds rather battered – she is. According to Hoskins, fashion in our capitalist world is responsible for most ills. She gives us a charge sheet: ‘reinforces racism, sexism, gender stereotypes, class and unequal power relations…exploits its impoverished workers and its customers…pushes the values of wealth and greed and promotes body insecurity and dissatisfaction.’ And there is more, much more.

However, she admits that ‘fashion is for many people an immense source of joy and a means for creative expression.’ Hurrah! So what is the answer? For Hoskins, obviously, it can only be revolution. She dismisses movements which resist or reform fashion, for while ‘organised campaigns can unite, engage, educate and inspire people, what they cannot do is produce clothes that are free of exploitation or environmental degradation. This is impossible under capitalism.’

Hoskins omits the difficult bit – how to achieve revolution – and in her final chapter describes fashion in a revolutionary world where, artistically everything is possible. Without oppression, exploitation and all the rest we shall have real choice. For those who have revolutionary images of ‘Mao suits’, she points out that people chose uniformity to preserve their lives ‘as a fashion faux pas could mean death’ so ‘rather than exterminate fashion, the Cultural Revolution produced  one of the most fashion-conscious (to the point of paranoia) nations in history.’ Hoskins’ revolution will be entirely different.

This book does not lift the lid on the fashion business, as the basic problems have been well documented in the media by many, including by Hoskins herself, though it is certainly helpful to anyone wanting to arm themselves with arguments. However, fashion is charged with too much; Hoskins ignores celebrity culture and the highly influential non-fashion media from magazines like Heat and newspapers or websites like the Daily Mail which are obsessed with body image.

By conflating fashion and capitalism, Hoskins does not explore the particular tensions within the industry and the efforts of many to take responsibility for its ills. Quoting Marx and Marxist philosophers risks the book becoming a simplistic Trotskyite take on the evils of capitalism, lacking illuminating rigour. Above all the reader is left with a sense of hopelessness: if nothing can be done short of a revolution that appears to be anything but imminent, we might as well carry on shopping.

Scarlett MccGwire is a communications consultant working with a variety of organisations including the London College of Fashion. Specialising in political communication she has worked with social democratic parties here, in Easten Europe, the Balkans, Africa and the Middle East. Read more reviews by Scarlett.