Originally published in 2001, Mark Duffield‘s Global Governance and the New Wars aims to show how war has become an integral component of development discourse. The book predicted much of what followed its initial publication: the post 9/11 prosecution of liberal interventions, the infamous remarks made by then Secretary of State Colin Powell about humanitarian ‘force multipliers’, the co-option of aid into security strategies, the bombing of the UN and Red Cross after the interventions in Iraq and Afghanistan, and the targeting of aid workers in conflict zones. Chris Harmer recommends this refreshed edition to students of development or international security, but is disappointed by the lack of new chapters and source material. 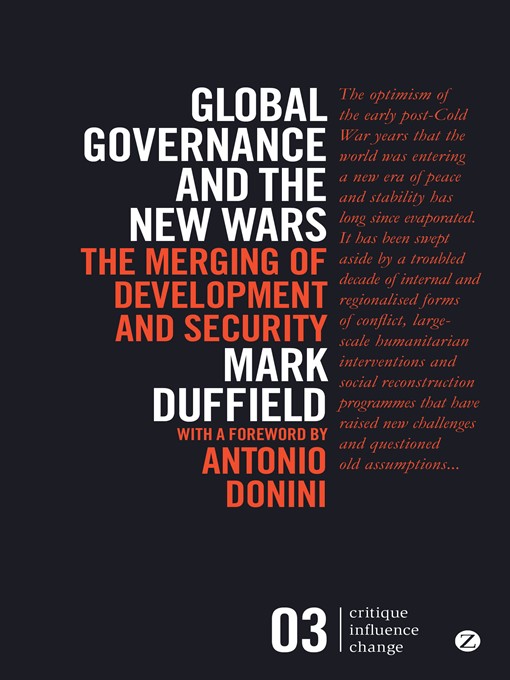 Since Global Governance and the New Wars was first published in 2001 it has served as a highly regarded and prescient analysis of how western development and humanitarian policies were transformed in the post-bipolar age of ‘liberal interventionism.’ Professor Mark Duffield’s insights into the relationship between aid policies and security are well known in development and humanitarian circles – and proved visionary in anticipating the wave of military and humanitarian interventionism that followed its original publication just before the events of 9/11. The newly re-published 2014 edition continues to have relevance and resonance not least because of the far-reaching consequences of the ‘new wars’ waged in pursuit of ‘liberal peace’. These continue to have profound implications for development and humanitarian policy-makers and practitioners – and those they seek to assist.

The radicalisation of development

By charting the evolution of what the author describes as the radicalisation of development, Global Governance and the New Wars demonstrates how, in less than a generation, the concept and purpose of development was entirely transformed. By the 1990s development was no longer primarily about promoting economic growth in the hope that development would follow. Instead, development policies became progressively preoccupied with under-development as a cause of conflict. As the threat of major inter-state war receded in the post-bipolar era, under-development replaced it as a major concern – one increasingly identified as a dangerous threat to peace and security. The remedies which gained greater ascendancy in development discourse were the prevention of conflict and conflict resolution. Economic liberalisation was no longer sufficient; development malaise had to be tackled by supporting democratisation, pluralistic institutions, transforming societies and the indigenous values of members in the liberal image of the network of ‘global governance.’

The merging of security and development

Duffield identifies the reinvention of development policy as conflict resolution as central to its radicalisation – a radicalisation made all the more striking by the near unanimous endorsement of the rapidly expanding network of global governance. Comprised of NGOs, agencies, military coalitions, international financing institutions, and donor governments, the goal of the network of global governance, the author reminds us, was the establishment of ‘liberal peace’: one that resolves conflict, reconstructs societies, and establishes functioning market economies as a way of avoiding future war.

As conflict resolution and prevention became a central aim of development policy, security and development became inextricably linked. Stability was regarded as unfeasible without development while development was non-sustainable without stability. The author narrates how this merging of aid and security was made manifest in western government development policies – including those of the Department for International Development and also in the establishment of the UN integrated mission. The creation of the integrated mission continues to generate considerable neuralgia today, notably among those who regard it as the institutionalised manipulation of international aid to achieve western foreign policy goals.

In addition to the linking of security and development, conflict resolution and societal transformation, the author also cites the emergence of a ‘new humanitarianism’ – a trend that complements and completes the radicalisation of development and the politicisation of aid. What constitutes humanitarian action also became radically transformed from its traditional and primary purpose of saving and protecting lives in peril. Here, Duffield’s prescient critique goes far in foretelling how humanitarian action would become a function of security interests, deployed to achieve political objectives, underpinned by the supposed moral intentions of western states’ interventions. It does much to explain how humanitarian action departed from its original purpose to provide aid according to the principles of independence, neutrality and impartiality and became incorporated into political and security strategies – ‘a corruption of the very essence of humanitarianism’.

Global Governance and the New Wars foresaw the illusory nature of a politicised humanitarianism that could contribute to global governance in a world ordered by the west. By laying bare the assumptions underlying this misplaced conceit the book predicts much of what followed its initial publication: the post 9/11 prosecution of liberal interventions, the infamous remarks made by then Secretary of State Colin Powell about humanitarian ‘force multipliers’, the co-option of aid into security strategies, the bombing of the UN and Red Cross after the interventions in Iraq and Afghanistan, and the targeting of aid workers in conflict zones – the list goes on.

But there the story ends. Apart from a brief preface on the impact of technology and remote management for the aid industry, source material for the 2014 edition remains almost exclusively from the 1990s. Disappointingly the book does little to answer the inevitable question it raises for the humanitarian endeavour: what, then, lies ahead? Answering this question is left to Antonio Donini in the book’s forward where he asserts that the vast expansion of its agenda has resulted in a drift from humanitarianism’s traditional moorings and its primary function of saving and protecting lives in immediate danger. He concludes that the love affair of western states with humanitarian action is unlikely to continue deep into the twenty first century. For it to do so would require the survival of two assumptions: firstly that humanitarian action serves the security interests of the countries that fund it; and secondly that it will continue to be dominated by western values. Donini believes that neither will sustain in an emerging multi-polar world and that for the humanitarian endeavour to become more modest in scope might be no bad thing if it returns to its fundamental purpose: ‘Humanitarian action is about injecting a measure of humanity into situations that should not exist. It is not about changing the world.’