This book brings together research that addresses some of the most significant cultural, economic, and political roles of the Internet. Peter Webster finds that individually, the essays in this volume are uniformly strong: lucid, cogent and concise, and accompanied with useful lists of further reading. As a whole, the volume prompts fertile reflections on the method and purpose of the new discipline of Internet Studies. Society and the Internet: How Networks of Information and Communication are Changing our Lives. Mark Graham and William H. Dutton (eds.). Oxford University Press.

The word ‘revolution’ is at a discount when it comes to discussing the impact of the internet, but current reactions to what is undoubtedly far-reaching and permanent change fit a longer pattern. Societies in the midst of rapid technological change often perceive the change as both radical and unprecedented. Previous technological shifts in communication have before been greeted in the same way as the internet, being understood in terms of utopia and dystopia. For some, the internet is a new technology in the vanguard of the inexorable progress of such abstract nouns as Freedom and Democracy. It dissolves the power of old elites, putting the power to communicate, publish, mobilize and do business in the hands of any who should want it. For others, it provides dark corners in which criminality may flourish out of reach of traditional law enforcement. It undermines the business models of cherished institutions, saps our powers of concentration, and indeed threatens the alteration of our very brains in none-too-positive ways.

These two mutually contradictory narratives have one trait in common: a naïve technological determinism. Both stories radically overestimate the degree to which new technologies have inherent dynamics in single and obvious directions, and similarly underestimate the force of the social, economic and political contexts in which real human beings design, implement and use new applications to serve existing needs and desires. It is the great strength of this stimulating collection of essays that at every turn it brings such high-flown imaginings back to the bench of empirical research on the observable behaviours of people and the information systems they use. Given the rapidity of the changes under discussion – the commercialised internet is only now reaching the age of an undergraduate student, as it were, with social media still in junior school – this kind of very contemporary history meets sociology, geography, computer science and many other disciplines in a still fluid interdisciplinary space.

The volume is very much the product of the Oxford Internet Institute, with all but six of the thirty-one contributors being associated with the institute in some way. The twenty-three essays are arranged into five thematic sections: everyday life; information and culture, politics and governments; business, industry and economics; and internet regulation and governance. Whilst the grouping is convenient as an orientation to the reader, the effect of the book is best experienced as a whole, as several themes emerge again and again. In this review I examine just three of many such themes.

One such is the complex geographies of the web. Gillian Bolsover and colleagues examine the shifting geographic centre of gravity of internet use. The proportion of total users who were located in the United States fell from two thirds to one third in a decade, and the proportion in Asia grew from a tiny 5% to nearly half over the same period. Bolsover and colleagues find that this shift in numbers is accompanied by distinctive geographic variations in the uses that users make of their internet, and attitudes to its regulation. Reading this chapter in conjunction with that by Mark Graham would suggest that these patterns of use map only loosely onto patterns of knowledge production (the “digital division of labour” between nations). These patterns of production in turn relate only inexactly with patterns of representation of places online; the “data shadows” fall unevenly. That said, the Global South both produces a small proportion of the content online, and is itself underrepresented as the subject of that content.

Many businesses, and media businesses in particular, have found the last ten years a time of particular uncertainty about the impact of the internet on long-established ways of doing business. Economists will be interested in two chapters which seek to address some of these issues. Sung Wook Ji and David Waterman examine the recent history of media companies in the United States, and point out a steady fall in revenues, and a shift from a reliance on revenue from advertising, to direct payment by consumers. Greg Taylor’s valuable essay examines the ending of the traditional economic difficulty of scarcity of goods by the advent of an almost limitless abundance of content online. This has created a different theoretical problem to be understood: the scarcity of attention that consumers can pay to that content.

Perhaps the most coherent section in the book is that on government and politics. Several governments (mostly amongst those western nations that were the early adopters of the internet) have placed considerable hope on online delivery of government services, and on social media as new means of engagement with voters. At the same time, both the chapters by Margetts, Hale and Yasseri, and by Dubois and Dutton examine the uses made by individuals of electronic means to organise and to influence government independently of, and indeed in opposition to, the agenda of that government. Governments have often expected greater benefits and lower costs from e-government; and political activists have tended to lionise the role of the self-organising ‘Fifth Estate’ of networked individuals to which Dubois and Dutton point. These five chapters situate all these hopes firmly in empirical examination of the interaction of politics, culture and technology in specific contexts.

Individually, the essays in this volume are uniformly strong: lucid, cogent and concise, and accompanied with useful lists of further reading. As a whole, the volume prompts fertile reflections on the method and purpose of the new discipline of Internet Studies. The volume will be of great interest to readers in many disciplines and at all levels from undergraduate upwards.

Peter Webster is an historian of contemporary British religion, with particular interests in church and state and the religious arts. He is also interested in the digital turn in contemporary history, and in particular the archived web as a new class of source. He is to be found blogging at peterwebster.wordpress.com or on Twitter @pj_webster. By day he masquerades as a librarian. Read more reviews by Peter. 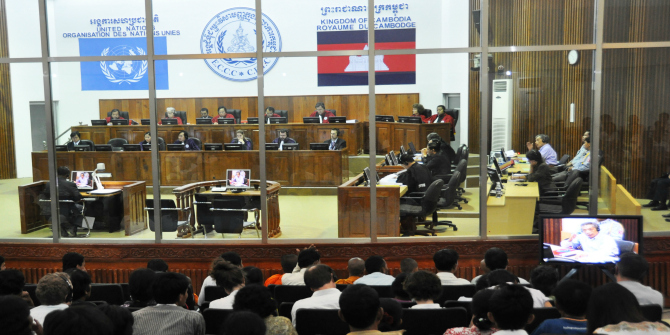