In this new book, Nikki van der Gaag asks how feminism might improve the lives of men as well as women. This book is highly recommended to anyone with an interest in issues around feminism and gender and could be the starting point for anyone looking to get an overview of men’s involvement in this movement, finds Andria Christofidou.

Nikki Van Der Gaag is a consultant and independent writer specialising in men and gender equality. In Feminism and Men, Van Der Gaag argues that there are still unequal power relations within and between the two sexes, yet men are now more aware of these and more willing to be engaged in feminism and feminist struggles.

Focusing on the relationship between feminism and men, Van Der Gaag asks ‘is there a place for men in the feminist revolution? And do men want to be part of it?’ (p.6). Her argument is that increasing amounts of men do challenge sexism and discrimination against women, and she emphasises that ‘equality cannot be achieved without the participation of men as well as women’ (p.12). Van Der Gaag emphasises throughout how crucial it is for men to get involved in current discussions about gender and provides numerous examples where men have initiated or have been involved in the fight against gender inequality and sexism. This book’s aim is to ‘bring together the feminism discourse with the movement of men for gender equality in a worldwide context’ (p.8).

Van Der Gaag discusses in detail examples from various national contexts and different spheres of social life such as the world of employment, domesticity and family life, education and health to present the latest developments that have occurred as well as improvements that are still to take place. Van Der Gaag opens by providing a brief history of the different feminist movements and by quoting Urvashi Butalian to emphasise the importance of understanding feminism in the social, political, and cultural realities where it exists, without undermining issues of concern that are being shared worldwide, which is a theme that runs throughout the whole book.

The author argues that feminism has become a problematic word for many people and moves on to focus on young feminists and their (often more accepting) attitudes towards men’s involvement in their struggle for gender equality. However, she does mention that there are still ‘men who support men’s rights -often in opposition to women’s rights’ (p.33) and provides rich examples to argue that even though there are men who want to be involved in feminism there are others who clearly fight against it.

Another interesting point Van Der Gaag makes is that even though there have been improvements in girls’ and women’s health and education in the past decade there is a need for equivalent focus on men’s health and education that will benefit both sexes holistically. The challenge as she argues is to ‘find ways of supporting girls and women that do not exclude boys and young men, but embrace their different needs in the broader framework of promoting a more equal world’ (p.110).

The book concludes with a discussion on men and violence. The author associates violence with the way men are socialised, the role of the media and violent pornography on the internet, patriarchal values, the violence boys and young men witness when they are young -often by their fathers- and the social norms that do not challenge but instead accept violent behaviours. By referring to the survey Van Der Gaag ran for the purposes of this book and to other studies by Everyday Sexism (2012) and the World Health Organisation (2013) she refers us to the 35% of women  around the world who have been raped or physically abused over the course of their lifetime, often by their partner. She emphasises the urgent need for action by both women and men and refers to the incapability of legislation as a way of stopping violence. As legal action does not seem to be stopping violence she stresses the importance of empowering women – and men whenever men are the victims of violence – to report such actions whenever they occur and refers to examples where men challenge violence through the development of campaigns against men’s violence against women and other informal initiatives in their everyday lives.

Overall, this is a very accessible, well-structured book that discusses a very current issue. Van Der Gaag’s arguments are extremely easy to follow and the rich quotes as well as the detailed cases she uses engage the reader further. Van Der Gaag draws on variables such as race and class which interplay with gender to present the complexity of the issue. This book is highly recommended to anyone with an interest in issues around feminism and gender and could be the starting point for anyone looking to get an overview of men’s involvement in this movement.

Andria Christofidou is a PhD candidate in Sociology/ Theatre Studies at the University of Glasgow. Her PhD is looking at negotiations and performances of male gender in dance companies and dance educational institutions in Scotland. She holds a BA in Sociology (University of Crete, 2011) and an MSc in Cultural Sociology (University of Aberdeen, 2012). Her research interests revolve around gender studies, queer theory, masculinities/femininities, cultural sociology and sociology of dance. 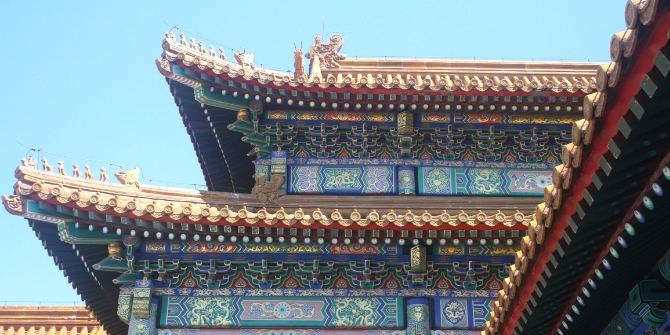 Long Read Review: Inside the World of the Eunuch by Melissa Dale and After Eunuchs by Howard Chiang