In Conceptualizing Terrorism, Anthony Richards argues for the necessity of analytically distinguishing terrorism from other forms of political violence. For Richards, this is not only vital to better define this proliferating term, but also to critically reflect upon the accordant remits afforded to ‘counter-terrorism’. Alexander Blanchard recommends the book for its timely attempt to further clarify the parameters of this highly contemporary preoccupation. 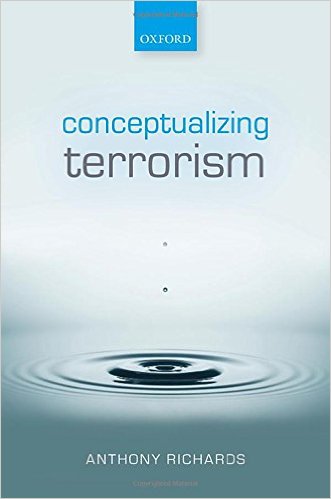 ‘Terror’ and ‘the war on terror’ might be the defining discourse of my generation. There has always been ‘terrorism’, and history is replete with acts that were meant to induce terror in the hearts not only of those who suffered them, but also of those who observed and heard about them. It is not so much the fact that ‘terrorism’ is subject to politically-motivated application that makes it so peculiar today; few value-laden terms forego political appropriation. What is striking about ‘terrorism’ is the ubiquity it has achieved, the pervasive and perpetual way in which it is applied. When a series of coordinated attacks in Paris that killed 130 people and a stabbing by a man with a reported history of mental illness that left three people wounded at an East London Tube station are joined together under ‘terrorism’, it is probably time for a conceptual disentangling. But when both of those acts, US drone attacks in Pakistan, NATO airstrikes in Libya, Julian Assange and equal rights demonstrations in Saudi Arabia, along with a number of other heterogeneous events, can all be labelled ‘terrorist’, one wonders what use there is in retaining the concept.

In his book Conceptualizing Terrorism, Anthony Richards contends that there is something analytically distinctive about terrorism compared to other forms of political violence. Moreover, he argues that it is incumbent upon political theorists and academics to clearly define the concept of ‘terrorism’ in order to reflect upon what is substantively distinct about it, for a failure to do so – a failure to stem the proliferation of its use – is also a failure to curb the political and legal remit of ‘counter-terrorism’. An abandonment of the concept, along with the potential for preventing states’ ‘abuse of power’, would be an ‘abdication of academic responsibility’ (9).

Though the subjective definition of terrorism stated by the former British Ambassador to the UN, Jeremy Greenstock, that ‘what looks, smells and kills like terrorism is terrorism’, or that ‘you know it when you see it’ (71), may make us baulk, this should not push us towards an uncritical narrowing of the concept. Precision, where boundaries and exclusions are established, can be just as dangerous in the service of power as ambiguity. It is commendable that Richards is wary of such potential pitfalls; he engages with Critical Terrorism Studies and cautions us to ‘guard against any transaction between discursive and political mastery’ (12-13). Neither, admits Richards, can his book claim to ‘speak truth’ on what is, after all, a social construction (vi).

Whether such provisos sit well with the desire for ‘neutrality’ (13) or ‘objectivity’ (14), given that such claims often come with aspirations towards truth, is questionable; as the book progresses, it is clear that Richards wishes his conceptualisation to be much more totalising than his introduction would otherwise suggest. In any case, all of these considerations are somewhat undermined by Richards opening his book with a vignette about Osama bin Laden’s assassination – ‘no ordinary ‘‘kill’’’ (1) – near Abbottabad in north-west Pakistan. If Richards, in giving a ‘neutral’ exposition, is attempting to challenge our common, loaded and trite conceptions of terrorism, then this was an unfortunate opener. 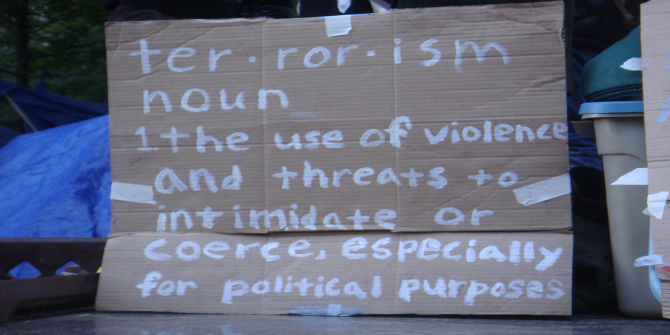 In the end, Richards’s conceptualisation is simple and effective: terrorism ‘is the use or threat of violence or force with the primary purpose of generating a psychological impact beyond the immediate victims for a political motive’ (18). The content of this conceptualisation is not entirely unique: it borrows from a long tradition of theorising which typically sees terrorism as designed to generate a psychological impact beyond its ‘immediate’ victims. But what is noteworthy about Richards’s contribution is that he extricates terrorism from the morally evaluative framework within which it is embedded, and presents it as a particular method of political violence rather than as a moral ascription for some actor or agent, or as inherent to some particular ideology or cause. This restores analytical clarity to the concept and forces us to determine, with honesty, ‘which forms of terrorism one objects to […], rather than declaring a blanket condemnation of all terrorism’ (20). It is the aim to which terrorism is put that becomes the object of scrutiny, and we have a large and refined enough moral vocabulary for doing just that. Indeed, one recalls that during World War Two, members of the French resistance termed their own attacks on the occupiers ‘terrorism’ – we could hardly dispute the legitimacy of such acts.

Secondly, Richards does away with the premise that the immediate victims of terrorism need be non-combatants (civilians), and allows that states can also be perpetrators of terrorism. He does, however, appear to want to put ‘state terror’ into a qualitatively different category, which raises a number of normative questions, not least because Richards’s claim that with ‘9/11’ al-Qaeda had ‘perpetrated the most devastating terrorist attacks in history’ (1) effectively effaces such acts as the Allied bombing of Dresden during World War Two. Nevertheless, if terrorism is to be conceptualised as a method, it is, analytically speaking, irrelevant who uses it and upon whom it is used, just so long as the intent to generate a psychological impact is present. This also saves Richards’s conceptualisation from the problem that other conceptualisations have often faced: namely, the simultaneous use of ad bellum (proper authority) and jus in bello (non-combatant discrimination) without assigning priority to either criteria or allowing for the justness of a cause.

Conceptualizing Terrorism is to be highly recommended. The lucidity and consistency with which Richards develops his argument and applies his insights, pre-empting and expositing on an array of potential objections, as well as the flawless and flowing style of his prose, make this a highly illuminating and enjoyable read. No doubt ‘power’ would be reluctant to take on the insights contained in this book, but its value nonetheless lies in helping us to grapple with an epoch-defining phenomenon. 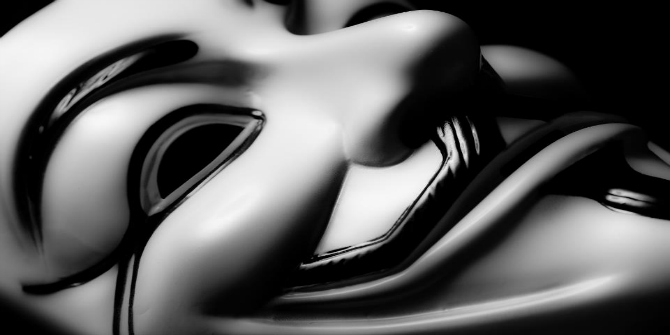