How might we consider danger, risk and uncertainty from an anthropological perspective and as modes of inquiry? In the edited volume Modes of Uncertainty: Anthropological Cases, Limor Samimian-Darash and Paul Rabinow present a series of essays that set out the basis for an emerging anthropology of uncertainty. Although this book comes slim in hand, it offers in-depth cross-cultural explorations that will appeal to those interested in the changing nature of the field, writes Elena Burgos-Martínez. 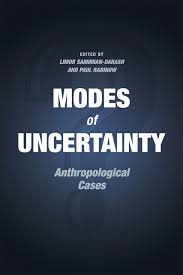 Whether you are an acolyte of anthropological modes of inquiry or a reluctant observer, Modes of Uncertainty: Anthropological Cases won’t leave you indifferent. It is especially prescribed to those dazzled by Michel Foucault’s ‘Lectures at the Collegè of France’ (whose theories transpire throughout this work). The wealth of this edited compilation of cases is precisely in its timely and thorough engagement with conceptual shifting and the governing of these fluctuating spaces. The contributors come from a variety of professional backgrounds and academic disciplines, but they all concur with the oblique fashion of contemporary anthropology and thus consider uncertainty-as-inquiry and uncertainty-as-mode for inquiry across intersecting spaces where actors, including anthropologists themselves, construct probable and possible futures alike.

By scrutinising this fluidity as the basis for research inquiry, the different chapters of the book appeal to a varied audience: from those into the theorisation of research outcomes to those leaning towards thicker cultural descriptions, external observers, policy managers and manufacturers and anyone willing to dedicate a few hours to exploring cross-cultural stances. Although Limor Samimian-Darash and Paul Rabinow have produced extensive literature on biotechnology, biosecurity, the contemporary and governing technologies in the face of current conceptualisations of risk and security, their publications have never offered such a comprehensive and holistic inspection of the potential of an anthropology of uncertainty, with ‘uncertainty’ being a mode for the problematisation of research inquiry rather than a phenomenon to be problematised in itself. This seems to better register the fluidity and multiplicity of contemporary anthropological subjectivation processes and their relational aspects.

This book comes slim in hand, but is heavy in the depth of its cross-cultural exploration of ‘uncertainty’ and ontological and methodological claims. In Chapter One, Pat O’Malley opens up the section entitled ‘Economics and Entrepreneurialism’ with her review of liberal and neo-liberal conceptualisations of insurance in Britain and the subsequent shift in managerial paradigms, with risk diacritics regulating how freedom is envisioned. Risk technologies rely on constructions of uncertainty as possibilities that render economic freedoms manageable and governable. O’Malley’s historical slideshow reflects upon the reintroduction, re-valorisation and celebration of uncertainty as a specific type of marketed freedom, where risk-taking enables the realisation of insured selves as entrepreneurial agents of their own change.

In Chapter Two, Eitan Wilf reviews how organisational policy and management has recently turned to the flexibility and uncertainty of jazz improvisation to infuse twenty-first-century organisational policy and theory in the United States. His contribution also reviews the emergence of a new class of mid-level workers as creative subjects who require the legitimation of new work-related forms of uncertainty in order to be managed. This book section culminates with Chapter Three, where Natasha Dow Schüll presents the speculative habitus of online poker software and the conceptualisation of the player as a self that has to undergo transformation under predictive ethos and embrace uncertainty in order to accomplish a very specific form of long-term justice. Good performance is evidenced after an extended period of playing under the learnt auspice of tracked performative data, calculative assemblage of other players and the consequent metamorphosis of the player’s modes of immediate re-action. 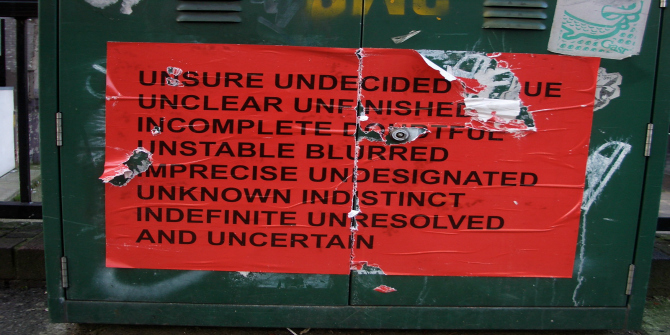 Part Two, ‘Security and Humanitarianism’, includes four thought-provoking chapters on topics that range from governing trauma through to humanitarian intervention and contemporary biological research. Meg Stalcup’s analysis of technologies of security for the post-9/11 Suspicious Activity Reporting Initiative in the United States introduces an emerging anticipation technology that is applied when observing, categorising and reporting unspecified suspicious behaviour under the assumption that doing so facilitates the management of ‘uncertain events’. Thus, in the constant redesigning of security as a form of governance, Stalcup approaches the shifting logics, perceptions of crisis, imagined futures and jurisprudential alliances, offering an insightful portrait of local constructions and institutionalisations of ‘suspicion’, ‘suspicious behaviour’ and ‘suspicious subjects’.

A succeeding chapter by Rebecca Lemov connects to Stalcup’s local notions of security as a governing technology, but rather than looking at constructions of the ‘suspicious subject’, she scrutinises processes where ‘knowledge-based paralysis’ highlights a problematic shift from the Cold War’s ‘coercive interrogation’ systems to the ‘enhanced interrogation’ regimes of the ‘War on Terror’ in the context of Guantánamo Prison’s catch-22 and the United States’ security policy, experimentation and practice. ‘Uncertain subjects’ to the public’s view and expert calculations of national security, those held in endless liminality become ‘post-human’ individuals.

Focusing on glocal constructions of ‘trauma’ and ‘trauma intervention’ and encounters with Cambodian trauma descendants’ differing discourses and experiences, Carol A. Kindron explores the relevant problematic of humanitarian interventions that aim at governing potential ‘trauma outbreaks’ amongst descendants. Her chapter offers a detailed ethnography of the frictions between newly created cosmopolitan scenarios and discursive alliances, and their translations into the so-called adapted traditional cultural lifeworlds. In the management of uncertain actual futures, the author stresses the importance of focusing on moments of contact, continuity and change in local resistance against glocally legitimised (and institutionalised) forms of trauma. Gaymon Bennet closes this section with a new approach to preparedness and risk technologies that shape and regulate new security concerns: namely, the institutionalisation of malice (the wrongful use of research outcomes) and blame (accountability in biological research) and constructions of future uncertainty by means of forecasted hostilities. He explores processes of decision-making and the dual use of research outcomes, where such institutionalisations and the governing of uncertainty are constructed.

This evocative monograph offers a final section entitled ‘Environment and Health’, starting with the introduction of a new diacritic of the neologism ‘horizon’ by Adriana Petryna. This chapter’s author situates ‘extreme weather events’ in the epicentre of the emergence of ever-receding political horizons of uncertainty that provide alternative heuristics to the management of risk. In her chapter she explores the concept of ‘tipping points’ from an ecosystem-based viewpoint that entails embracing uncertainty as an expert mode for climate change prediction and policy-making.

A subsequent chapter by Frédéric Keck directs us to the diverse perceptions of potential risk as experienced by virologists and bird-watchers as sentinel devices in Hong Kong. In this, he offers a new take on the analogy of hunter-gatherers in considering the interface of human/non-human species. The role of virus hunters in the management of uncertainty on pathogens crossing species borders through the production of knowledge about imagined events becomes primordial to challenging old narratives of risk and danger that fail to register the multiplicity of relations created when species barriers are crossed.

Austin Zeiderman’s final chapter examines the meshwork of governmental techniques and political rationales that go into the implementation of risk management policy in urban settings. He focuses on Bogotá’s suburbs in Colombia, where combined features such as unstable landscapes, political inequality and poverty qualify as spaces of uncertainty. Zeiderman’s insightful ethnographic research gives us concrete examples of neighbourhoods where the management of uncertainty does not rely on predictive calculations. It also points out the fluid aspects of managing disaster risk and on-site decision-making strategies (intuitions, negotiations and observations) that are enacted to categorise such spaces.

This book, although highly urban-centric, is undoubtedly a high quality contribution to the field of anthropological research and ethos, not only in terms of theorising socio-cultural problematics, but also in interrogating the frictions between boundaries as an order of its own. The editors argue that their monograph sets out the basis for an emerging anthropology of uncertainty not as an exclusively theoretical, descriptive or external mode, but as a frame for the scrutiny of positionality: that is, a new mode of inquiry where the researcher is subject to change. Modes of Uncertainty is thus directed to those engaged with the multiplicity of phenomena, the retesting of conceptualisations and the changing role of anthropological inquiry.

Elena Burgos-Martínez is engaged in exploring the intersections of disparate environmental conceptualisations as a continuum where composite notions of cultural identity, agency in social change and linguistic ethea help the anthropologist navigate the nuances of contemporary being in cross-cultural spaces. Elena has carried out fieldwork amongst the Bajo of North Sulawesi, Indonesia, as part of her PhD in Anthropology at Durham University. 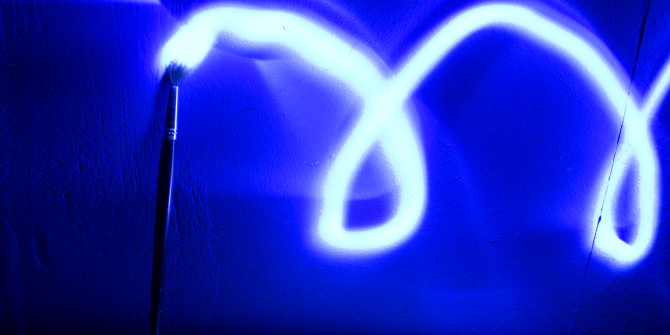