In Uncertain Futures: Imaginaries, Narratives, and Calculation in the Economy, editors Jens Beckert and Richard Bronk bring together contributors to explore expectation formation in economics, with essays providing vivid historical and empirical examples of fictional expectations as an alternative to the prevalent rational expectations hypothesis. This is a thought-provoking and analytically helpful collection, finds Ekaterina Svetlova, which challenges established assumptions and suggests fruitful paths for further research.

If you are interested in this review, the authors discuss the book in an LSE public event podcast here, recorded on 1 November 2018. 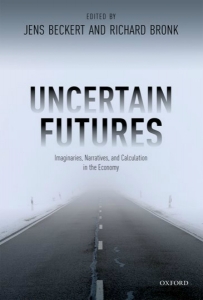 There has been a longstanding debate about expectation formation in economics. The economic core concept of rational expectations, however, has long been criticised for ignoring the problem of radical uncertainty and representing economic agents as perfect statisticians who uniformly make probabilistic forecasts based on historical data. Crucial phenomena such as technological innovations and the heterogeneity of agents’ beliefs cannot be explained within this framework. The question thus remains: is there a better concept that elucidates how economic actors form the expectations and beliefs on which their consequential decisions depend?

The volume Uncertain Futures: Imaginaries, Narratives, and Calculation in the Economy, edited by Jens Beckert and Richard Bronk, develops the notion of fictional expectations as an alternative, or a successor, to the rational expectations hypothesis. The concept was coined by Beckert in his book Imagined Futures: Fictional Expectations and Capitalist Dynamics (Harvard UP, 2016) and is clarified and refined in the introduction to this collection. The fictional expectations approach pays particular attention to the situation of unawareness and innovation in which decision-makers are ignorant of potential future events, and depicts expectations as imaginaries of what could happen or how the future could develop. Beckert and Bronk suggest that economic actors strongly anchor their expectations in narratives that are akin to literary fictions. The point is that literary narratives are read because they are convincing, not because they are true. Plausible (because convincing) imaginaries provide the basis for decision-making and help one to overcome radical uncertainty.

This theme is further developed and illustrated by the volume’s contributors who provide vivid historical and empirical examples of how fictional expectations are formed and debated in various fields. These range from financial markets and credit rating agencies to economic forecasting institutions, central banking, geopolitics and technological innovations.

Two topics became particularly prominent in the contributions to the volume. First, economic imaginaries are not random fantasies about the unknown future; they are combined in one or the other way with (or are supported by) models and other calculative devices. Thus, the question addressed throughout the book is: how exactly does this interplay between narratives and calculations happen? The chapter on central banks by Douglas Holmes, for example, demonstrates how the development of a legible and consistent story about monetary policy and not the conveying of numerical macroeconomic expectations preoccupied the officials of Sweden’s Riksbank in 2009. Also, as the book chapter by Werner Reichmann shows, in the production of economic prognoses in forecasting institutes, models frequently take the backseat and give way to the competing narratives; the professional forecasting thus takes the form of foretalk, a combination of forecasting and talk.

Second, if economic narratives have to be convincing, how do people start – and stop – believing in them? How do they get convinced? And which narratives stick with economic actors? The book highlights that these questions are now recognised to be central for politicians, company managers, central bankers and other practitioners and regulators. The answers, however, are still in the process of developing. David Tuckett’s chapter on Conviction Narrative Theory makes an interesting theoretical contribution in this respect, referring to storytelling as an ongoing, day-to-day process of organising experience and making sense of complex uncertain situations in the field of fund management. Stories generate excitement and optimism, on the one hand, and help to manage doubts and anxiety, on the other. However, again, stories about the future are based on numbers that are plausible enough to produce an illusion of certainty, and motivate and force action. Conviction narratives consist of two interrelated parts: literary, emotionally-laden fictions and calculations (i.e. formal models, algorithms, investment processes, etc). The latter provide for scientificity and objectivity and are the source of authority for the communicated stories.

Importantly, the book not only allows the overcoming of the pitfalls of the rational expectations hypothesis but also the sociological fixation on shared beliefs as a pre-condition for action. The contributions clearly show that beliefs about the future are negotiated among parties and co-created in those negotiations. Sometimes, shared beliefs might be achieved; at the same time, the dissonance of expectations resulting from power battles and political games is not an exception. The chapter on Arctic futures by Jenny Andersson vividly demonstrates how economic or geopolitical powers and the interests of the involved actors and institutions are the source of credibility for the competing stories and determine which images of the future dominate the discourse. Thus, expectations are projections of economic incentives and of the careful sorting of images in power games.

Generally, the volume opens interesting avenues for further research. Clearly, it can be read as a call for further development of ‘narrative economics’, the concept recently introduced by the Nobel Prize winner Robert J. Shiller (2017). It suggests that in economics we still find large ‘pockets’ where human judgment, imagination and stories are as important as complicated formulas and algorithms. The link between expectations, formal tools, stories and imaginaries is not as straightforward as the recognised concepts in economics and sociology indicate. For example, the editors of the book propose caution in understanding this link as purely performative: models, narratives, forecasts and business plans do not always produce the reality they describe (see MacKenzie, 2006). This process is mediated by power relations, institutions and the complicated interplay between formal technologies and narratives. Again, this interplay, the book suggests, should be rigorously investigated in its own right. The first steps have been done in the volume’s contributions and also in some recent empirical studies (e.g. Svetlova, 2018). More efforts are necessary, however, in this regard.

Overall, Uncertain Futures is a thought-provoking and analytically helpful book. It corrects some established assumptions in economics and sociology and proposes directions for further research in such important fields as decision-making under uncertainty, economic microfoundations and sociology of expectations.

Ekaterina Svetlova is Associate Professor in Accounting and Finance at the University of Leicester - School of Business. Her research interests include decision-making under risk and uncertainty, economic sociology and social studies of finance and accounting. Her current projects focus on communication and visualisation of accounting information and risk reporting.