Have you ever wished for a second chance at a job interview, performance or difficult conversation? Drawing upon her popular TED talk, in Presence: Bringing Your Boldest Self to Your Biggest Challenges, Harvard Business School Professor Amy Cuddy encourages readers to see transformative power in small ‘nudges’ in behaviour, body language and mind-set that can generate a better sense of ‘presence’ in our everyday lives. Marion Koob finds much in the way of useful advice within the book but wonders if its central ideas could have been outlined in a shorter span and wishes for more explicit connection between Cuddy’s claims and related contemporary research.

Presence: Bringing Your Boldest Self to Your Biggest Challenges. Amy Cuddy. Little Brown. 2015. 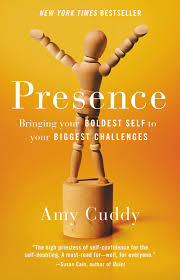 During her sophomore year of college, Amy Cuddy was the victim of a car crash in which she sustained a traumatic brain injury. Due to the nature of the damage, no one could tell her which brain functions would be affected and for how long, or whether she would even recover at all. Her IQ dropped 30 points. Doctors doubted that she would ever be able to return to her studies. Yet, over the following years, Cuddy completed her undergraduate degree. She has proceeded to pursue an academic career, becoming a Professor at Harvard Business School. Throughout this journey, Cuddy struggled with what is known as ‘impostor syndrome’ – the fear of being exposed as a fraud – even in the face of her numerous accomplishments.

Cuddy recounted her story in a TED Talk in 2012. The video, which has received over 30 million views, made her world famous. Her new book, Presence: Bringing Your Boldest Self to Your Biggest Challenges, covers much of the same content and refers to the talk repeatedly. In it, she links impostor syndrome and her own experience of it to her research as a social psychologist, which has thrown up a truly surprising discovery.

It is widely believed that our body language reflects our mood: we might cross our arms when feeling insecure or threatened, for instance, or extend our limbs when feeling comfortable. Cuddy’s studies, however, show that body language can also feedback on our emotions. Holding a power pose for as short a time as two minutes leads us to feel more confident and perform better at certain tasks. Or when forced to smile by holding a pencil between our teeth, we end up feeling happier. The author posits that posturing for success can be a key tool in overcoming impostor syndrome. She advises her readers to use body language to ‘fake it until you become it’ – in other words, behave with confidence until you truly feel it.

Presence is marketed as self-help, but it is not quite that. The volume is in part an extensive overview of studies that demonstrate the body-to-mind feedback loop. Aside from a few short chapters of advice, the rest of the book is psychology theory. Here, Cuddy explores the concept of presence, which she terms as ‘the state of being attuned to and able to comfortably express our true thoughts, feelings, values and potential’ (24). Looking like ‘confidence without arrogance’ (26), presence is all about being in the moment and being at your best. And you can achieve it, Cuddy argues, through the right body language. 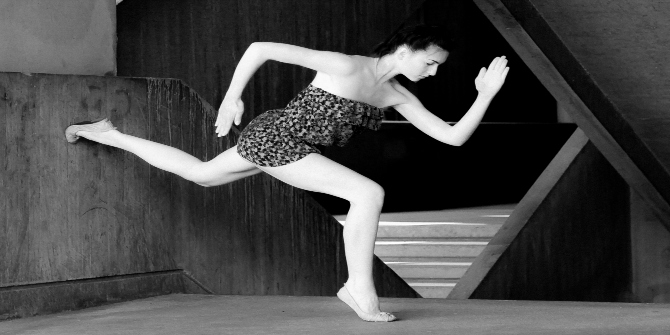 Chapter Nine, ‘How to Pose for Presence’, is where Cuddy provides the most practical advice. Following on from her studies, she argues that we should choose to enter into ‘power poses’ ahead of challenging situations, such as meeting new people, receiving or giving critical feedback or speaking up. People do not respond well when dominant power poses are directed at them, and so taking these into the situation itself can backfire. Instead, the best way to stimulate confidence and a sense of ‘presence’ is to prepare with big poses ahead of the challenge itself.

When presenting, it is best to stand up straight, take a slow, deep breath and keep your chin parallel to the ground – straight, but not so high that it seems like you are looking down on your audience. When you are speaking and standing still, keep your feet to the floor – but it is best to have some deliberate movements. Walking around is stimulating both for oneself and the audience, as long as it has pauses (no frenetic pacing). You may also want to take up what Cuddy terms as ‘temporal’ space – taking your time, speaking slowly and pausing.

Throughout the day, we should avoid hunching over our phones as this posture makes us feel less confident. It is a good idea to bring power posing into daily routines, such as brushing your teeth. Cuddy also suggests organising personal spaces in a way that encourages expansive postures, such as placing happy pictures high up on a wall to make yourself extend up to look. Standing, rather than sitting, at a desk is preferable, and so are walking meetings.

Cuddy’s advice is helpful, although it feels a little thin on the ground – the chapter itself is only about ten pages. What is more, the challenge in implementing her recommendations is not so much understanding what needs to be done, but remembering to do so. As such, more extensive suggestions of how one might integrate them into day-to-day life would have been welcome.

The author addresses this further in the subsequent Chapter Ten, ‘Self-Nudging: How Tiny Tweaks Lead to Big Changes’. Here, Cuddy seeks to tie her advice to the wider self-help literature. She provides an overview of Richard Thaler and Cass Sunstein’s work in Nudge on developing one’s choice architecture (how our choices are laid out) to unconsciously push ourselves towards preferred outcomes. They are described as ‘nano-sized investments for medium-sized gains’ by Daniel Kahneman (254). Cuddy believes that we should aim to self-nudge ourselves towards better posture, a sense of presence and hence better selves.

Cuddy also brings in Carol Dweck’s research on growth vs fixed mindsets. Dweck posits that when an individual focuses on the process and not results, they see dramatic improvement. If we focus on our behaviour rather than outcomes, Cuddy seems to imply, we will be able to reinforce positive changes. The author concludes with an explanation of why our New Year’s resolutions typically fail: we set ourselves unrealistic goals which, when unfulfilled, generate a sense of failure that discourages us from pursuing the resolutions. It is therefore much better to aim for small – change today, in the present moment, step-by-step.

Presence is intended for a general readership. It goes without saying that the book covers crucial findings. Cuddy has already improved many lives, and will likely improve many more. Her voice, as a writer and a speaker, is friendly and sympathetic. However, the book is oddly structured as though Cuddy struggled with defining its purpose. Is it a self-help book? A psychology book with practical implications? An accompaniment to her TED Talk? She goes for a little bit of all three. As a result, Presence is scattered and uneven, bringing together content as disparate as in-depth psychology theory and extracts of emails sent to the author in response to the talk (the latter making up a whole chapter).

In addition, Cuddy faces another challenge. While the central premise of Presence is striking, it is very simple. This helps to make the idea contagious, but becomes an obstacle for expanding it into book-length content. In some sense, there is no need for 300 pages when the central ideas could have easily been dealt with in 50.

Yet, what is perhaps most disappointing is that the author dodges other related disciplines, rather than finding a way to connect her ideas to them. For instance, Cuddy dismisses mindfulness and meditation as something different early on in the book. There is no shortage of scientific research on their efficacy, and it would have been interesting to see the author attempt to resolve them with her idea of presence or, at the very least, identify their similarities.

Marion Koob has a BSc in Government and Economics at the LSE and and MPhil in International Relations at the University of Cambridge. She has worked in Polis, the LSE’s journalism think-tank, and is now at the British Film Institute. Read more reviews by Marion Koob.