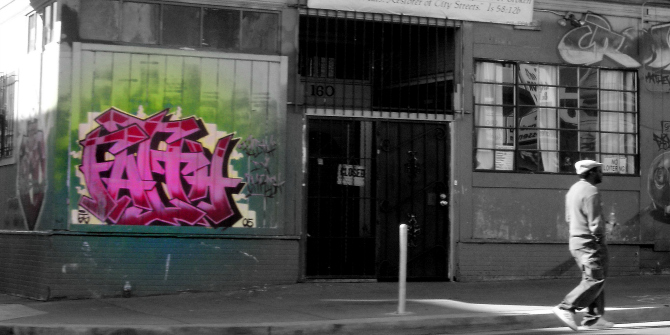 Last month, June 2016, the LSE Religion and the Public Sphere blog launched, exploring the place and role of religion in British public life today. To celebrate the launch, the blog’s Editor Esther Kersley has brought together 8 must-read books on the topic, ranging from philosophical debates on religion, secularism and the public sphere to detailed accounts of how religion exists in Britain today.

A leading participant in the thinking process behind the secularisation thesis in Western societies, Habermas believed that religion would eventually disappear from the public sphere due to the rationalisation of society. In recent years, however, he has changed his view in light of new world developments. While not strictly a book, ‘Religion in the Public Sphere’, published in the European Journal of Philosophy in 2006, argues that there are limits to the separation of church and state, and that religion has something important to offer the public sphere. Religion can inform public discourse but requires religiously-based claims to be translated into secular, publicly accessible reasons.

The 1980s is when religion ‘went public’, leaving its assigned place in the private sphere and thrusting itself into the public arena. Four seemingly unrelated yet almost simultaneous developments – the Islamic revolution in Iran; the rise of the Solidarity movement in Poland; the role of Catholicism in the Sandinista revolution and other political conflicts throughout Latin America; and the public re-emergence of Protestant fundamentalism as a force in US politics – gave religion the kind of global publicity that forced a reassessment of its place and role in the modern world. Casanova looks at five contemporary case studies of public religion from two religious traditions (Catholicism and Protestantism) in four different countries (Spain, Poland, Brazil and the USA), serving to illustrate empirical instances of various types of public religion. Casanova argues that we are witnessing the ‘deprivatisation’ of religion, whereby religious traditions throughout the world are refusing to accept the marginal and privatised role that theories of secularisation had reserved for them.

This collection of essays features four prominent public intellectuals – Habermas, Charles Taylor, Judith Butler and Cornel West – taking part in a dialogue on the relationship between religion and the public sphere, each taking up a different strand of this engagement. The ‘Afterword’ by Craig Calhoun provides contemporary context, discussing the effect of these approaches in national and international domains and the contributions of religion to contemporary cultural, political, social and philosophical debates and movements.

Find The Power of Religion in the Public Sphere:

In recent years established understandings of how the terms ‘secularism’ and ‘religion’ function in public life have been challenged and a so-called ‘religious resurgence’ has called into question the supposedly clear division between the religious and the secular. Rethinking Secularism brings together an interdisciplinary group of scholars to reconsider secularism and secularity in the context of contemporary global politics and transnational social change. The symbiotic relationship between religion and secularism is highlighted here, with the book seeking to reframe discussions of religion in the social sciences by drawing attention to the central issue of how ‘the secular’ is constituted and understood.

5). God is Back: How the Global Rise of Faith is Changing the World. John Micklethwait and Adrian Wooldridge. Penguin. 2010.

Micklethwait and Wool­dridge show that religion and modernity are not at odds but in fact go together in much of the world, challenging the notion that the more modern a society becomes, the less room there is for religious belief and practices. God is Back argues that it is the US, rather than the European, model of religious tolerance that is prevailing in the world today, and that contemporary religion may play a role in making the modern world more open, tolerant and peaceful.

Find God is Back:

Moving to look at Britain in particular, Davie’s 1994 book Religion in Britain Since 1945 became one of the leading resources in the field of Sociology of Religion. The phrase ‘believing without belonging’ became its defining feature, describing the disjuncture between religious belief in Britain, which remained relatively high, and religious membership or practices, which declined markedly in the post-war period. The second edition, published in 2015, takes into account the dramatic changes in Britain since 1994, describing the religious situation in twenty-first century Britain, finding that religion has become more and more publicly visible in the course of the last few decades.

The terrorist attacks of 9/11 and 7/7 did not show the failure of multiculturalism, but rather highlighted the urgent need to include Muslims in contemporary conceptions of democratic citizenship.  According to Modood, it is multiculturalism that is best placed to do this. Multiculturalism, reviewed in LSE RB, argues that the ‘crisis of secularism’ is really the challenge of post-immigration multiculturalism, in particular the place of Muslims (or identities that are perceived to be ethno-religious) in liberal democracies. Multiculturalism, Modood argues, remains a living force that shapes our polities and remains the best form of integration we have.

This ethnographic study of the British and Foreign Bible Society traces how a small group of Christians in England and Wales are trying to create more room for faith in the public sphere. By considering the lived experience of people whose goal is ‘publicising’ religion, God’s Agents forces us to rethink the location of religion in post-secular England. It provides new ways of thinking about the relationship between the religious and secular, in particular the different ways in which the secular shapes modern life on a day-to-day basis, and how our current understanding of religion needs to be complemented by a greater attention to the process of generating publicity.