What did it feel like to be a woman in Paris from 1939-49? What were the choices women were forced to make in order to ensure their survival during the Nazi occupation? Anne Sebba attempts to answer these questions, and many more, in Les Parisiennes: How the Women of Paris Lived, Loved and Died in the 1940s, using an impressive array of primary sources including interviews with surviving women. The book chronicles how women from all walks of life coped during years of fear and uncertainty, and gives readers insight into the life-and-death daily decisions that women in Paris made. Katherine Williams recommends this book to those interested in social history, gender and femininity studies.

Les Parisiennes: How the Women of Paris Lived, Loved and Died in the 1940s. Anne Sebba. Weidenfeld and Nicolson. 2016.

Anne Sebba, former foreign correspondent for Reuters and author of such books as Jennie Churchill: Winston’s American Mother and That Woman: The Life of Wallis Simpson, Duchess of Windsor, gives us the first in-depth study of the everyday lives of women and girls in war-torn Paris. Although politics lie at the heart of Les Parisiennes: How the Women of Paris Lived, Loved and Died in the 1940s, the author offers the reader unique insight into Parisian culture and weaves together a rich tapestry of personal accounts detailing how women strove to maintain their identity during the Nazi occupation. Les Parisiennes examines both collaborator and resister accounts, demonstrating that during times of war, personal choices are not black-and-white affairs.

In the prologue, the author describes meeting Annette Krajcer in 2015, one of the few survivors of the notorious French round-ups of Jews. Annette and her sister were imprisoned in Drancy alongside 13,000 people, 4,000 of whom were children. It was only by chance that a family member secured the girls’ release, narrowly sparing them from being transported to Auschwitz. Similarly, whilst Séverine Darcque was not born until long after the end of the Second World War, she owes her life to Pierrette Pauchard, who helped to hide Séverine’s future grandmother from the round-ups.

Such personal accounts show the important legacy of women’s stories and their experiences during Les Années Noires (‘The Dark Years’). The diverse narratives coming out of this period help to demonstrate that the past is not necessarily the past in France today, argues the author; it wasn’t until 1995 that President Jacques Chirac acknowledged the Vichy government’s collaboration with Nazi Germany and its subsequent willingness to deport French Jews to extermination camps to the east.

Les Parisiennes makes use of the many personal accounts of women during the years of occupation, but not without difficulty: women were often forced to make complex choices during this period, some of which many and their families find difficult to explain or justify today. Consequently, some interviews were hard to secure. However, the author also makes use of women’s diaries, letters and memoirs, both published and unpublished.

Throughout Les Parisiennes the author describes how women used their femininity and fashion as a weapon of resistance against the Germans, whether by wearing lipstick during times of rationing or continuing to shop at exclusive boutiques until their inevitable closure. For the purpose of this relatively short review, I will concentrate primarily on the years 1943-44, whereby women had joined resistance movements in droves against their Nazi oppressors but, as shall be discussed, did not necessarily receive a hero’s welcome after liberation. 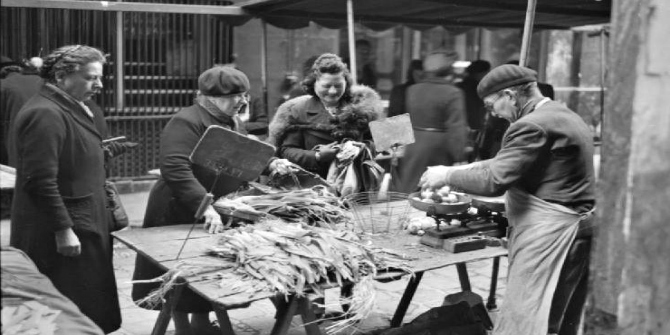 Whilst the war offered women more freedom in terms of employment opportunities, their personal freedoms were still largely controlled by the fascist state who were attempting to follow Nazi Germany’s Kinder, Küche, Kirche (‘Children, Kitchen, Church’) doctrine. In ‘1943: Paris Trembles’, the author describes how on 30 July 1943 a woman named Marie-Louise Giraud was guillotined by the Vichy administration for the ‘crime’ of performing abortions. Marie-Louise holds the dubious accolade of being the only person in French history to be executed for such a reason. However, abortions were available to the rich for around 4,000 francs, but not always performed in the best interests of women: Arlette Scali described how her husband ‘did not want children […] when I was pregnant, my mother-in-law paid for abortions which were illegal and costly. It was horrible.’ Women who attempted to take control over their own lives and bodies in times of increasing uncertainty were antithetical to the administration’s attempt to fall in line with the ideology of their German occupiers, yet women’s bodies could be consumed by those rich enough to afford it as the Vichy government had legalised prostitution. Giraud was a victim of a regime that was rapidly falling out of touch with French society at large, argues the author, and represents the culture of denunciation that prevailed during occupation, of which there were around 3.5 million in France during the war.

Despite this, many ordinary Parisians had become tired of witnessing cruelty and barbarity on a daily basis and joined resistance groups. As Jacqueline d’Alincourt describes: ‘should one resign oneself to bow one’s head in submission? I knew that I would rather die.’ Jacqueline was eventually sent to Ravensbrück concentration camp for her role in resistance activities, but like so many other women, she was determined to do something, whether to join the UK’s SOE (Special Operations Executive) like Marie-France Geoffroy-Deshaume, or to help on escape lines like Denise Dufournier, whose worldview was summed up by her daughter: ‘you either did something or you were a collaborator.’ Denise was also sent to Ravensbrück. (The camp experiences of d’Alincourt, Dufournier, Genevieve de Gaulle, Germaine Tillion and other French resisters are detailed in If This is a Woman: Inside Ravensbrück: Hitler’s Concentration Camp for Women by Sarah Helm.)

On 6 June 1944, Operation Overlord began, putting in motion a series of events that would lead to the liberation of Paris in the August. In ‘1944: Paris Shorn’, the author describes how, in the euphoria of liberation, many women were accused of collaboration horizontale with the Germans. This implied that French women had sexual relations with the occupying forces, but women who had performed professional services for the Germans, such as cooking and cleaning, were also targeted by zealous mobs who beat them up and shaved off their hair. Women who were accused of ‘infidelity to the nation’ could even have swastikas drawn or branded onto their naked bodies before being paraded through the streets.

General de Gaulle did not punish the male political and commercial elite who had backed Pétain; such men were considered useful allies against the alleged communist threat. This was, of course, an extremely misogynistic response to the alleged role of French women during occupation; the fact that many remarkable women had risked their lives to help the Allies secure victory over the Nazis was conveniently forgotten in the post-war melee. However, if French society at large would not recognise the contribution of women resistance fighters, they had to do it themselves: Irène Delmas organised the first conference of resistance women in 1944 and over 350 attended. Yet, to date only six women have ever been awarded medals for their role in securing France’s victory.

Les Parisiennes is a fascinating exploration of the everyday lives of French women during the war years, encompassing the personal accounts and experiences of many diverse figures such as designer Coco Chanel, novelist Irène Némirovsky, Nazi collaborator and racing driver Violette Morris and resistance fighters such as Cécile Rol-Tanguy, de Gaulle and Tillion, among countless others. Many women found ways to resist the German occupiers, and whilst their efforts were dismissed as inconsequential after liberation, we now know that they were essential to securing peace not only for France, but also for the whole of Europe.

Posted In: Europe and Neighbourhoods | Gender and Sexuality | History