In the new edited collection New Order and Progress: Development and Democracy in Brazil, Ben Ross Schneider brings together contributors to offer a timely historical, comparative and theoretical contextualisation of contemporary Brazil at a point when the country is experiencing the fallout of recession and corruption scandals. This illuminating volume sheds light on some of the nation’s trials and tribulations over recent years, but also gives hope for Brazil’s future, writes Jeff Roquen.

For the 2014 World Cup and the 2016 Olympics, a sea of humanity poured into Brazil to experience the thrills of global sports competition and to plunge into one of the most enticing cultures in the world.  Instead of delving into the morass of domestic politics, most visitors spent their precious vacation time walking across the four-kilometre promenade on Copacabana Beach, snacking on the ubiquitous Biscoitos Globo (Globo biscuits), downing their first, second and perhaps third caipirinha cocktail, tasting the slave-created national dish feijoada, listening to the mellifluous notes of the Bossa nova, taking in the rhythm and hypnotic movements of the samba, snapping selfies with Pão de Açúcar (Sugarloaf Mountain) in the background and stopping for a cafezinho (little coffee) at a coffee shop near Avenida Paulista in São Paulo – Brazil’s largest city.

Beyond its seemingly endless appeal to the human spirit, however, the largest nation in South America – which at one time exemplified good governance and economic expansion – has recently become mired in political corruption scandals, thrown into a parlous recession and saddled with a mediocre national football team. In New Order and Progress: Development and Democracy in Brazil, editor Ben Ross Schneider offers a vital contextualisation of Brazilian politics through an examination of its evolving, structural polity.

Of the three essays in the first section on ‘Development Strategy’, Sarah M. Brooks and Marcus J. Kurtz explain how Brazil avoided the ‘resource curse’ in ‘Natural Resources and Economic Development in Brazil’. Unlike Nigeria and other nations that became almost wholly dependent on international oil companies (IOCs) to extract and refine their endogenous reserves, Brazil immediately constructed an institutional framework – beginning with the establishment of the Geological and Mineral Service (SGMB) in 1907 – and formed a coherent set of policies to prevent foreign firms from gaining control of the industry. Under the regime of Getúlio Vargas (1930-45; 1951-54) – a visionary strongman known as ‘The Father of the Poor’ – qualitative improvements across society were achieved by the new Ministry of Health and Education and a federal directive requiring states ‘to devote 10 percent of local budgets to public schools’ (38). As a result of sizeable investments in human capital (health and education), a robust industrialisation plan and the formation of the National Council of Petroleum (CNP) in 1939, Vargas laid the groundwork for decades of fossil fuel-driven wealth for the benefit of the nation, instead of merely enriching the elites. The founding of the state oil company Petrobras fifteen years later in 1954, which reflected widespread nationalist aspirations in the slogan ‘O petróleo é nosso!’ (The oil is ours!), ushered in a period of unprecedented growth. 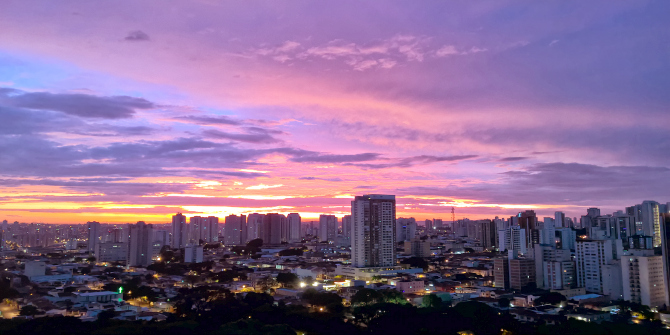 In concluding ‘Petrobras was instrumental in Brazil’s ability to turn natural resource abundance into a blessing’ (48), however, Brooks and Kurtz may have oversimplified or omitted part of the story – as indicated by the following article, ‘Petrobras in the History of Offshore Oil’ by Tyler Priest.  Three years after Petrobras unveiled a new, massive oil deposit in the Santos Basin in 2007, Brazil’s President Luiz Inácio Lula da Silva, who served as one of the founders of the Partido dos Trabalhadores (PT) or Workers’ Party, beamed with pride over the $225 billion earmarked to develop the discovery and bragged: ‘It was not in Frankfurt, nor in London, nor in New York.  It was in São Paulo, in our green and gold Bovespa (stock market), that we consecrated the greatest capital-raising in the history of world capitalism’ (53).

Yet, the larger feat of locating, financing and bringing the oil to market, according to Priest, resulted from decades of technological collaboration with IOCs. Amid high-tides of vociferous, anti-American sentiment, the successful development of Brazil’s oil infrastructure after the Second World War was due in part to the efforts of former Standard Oil (New Jersey, USA) geologist William Link – a key member of Petrobras in the 1950s – and assistance from foreign companies such as GSI (USA), Foramer (France) and Aker Solutions (Norway). Ultimately, Priest delivers a finely-researched transnational analysis of his subject.

The first essay in the section on ‘Social Change’, ‘Understanding Recent Dynamics of Earnings Inequality in Brazil’, by Francisco H.G. Ferreira, Sergio P. Firpo and Julian Messina, constitutes an impressive, data-driven interpretation of the Brazilian economy from 1995 to 2012.  Rather than Bolsa Família (Family Allowance) – a somewhat controversial federal programme launched in 2003 providing federal subsidies to impoverished households – the authors attribute targeted investments in human capital, increases in the minimum wage, declines in the wage-gaps between both male and female and white and non-white workers and a significant surge in the number of labour contracts as the preponderant causes behind the near two-decade wave of prosperity.  Although plausibly correct from their methodological standpoint, Ferreira, Firpo and Messina fail to adequately address how social progress, particularly with regard to changing perceptions on race, may also account for the across-the-board rise in incomes.

Subsequently, ‘The Reduction of Poverty and Inequality in Brazil: Political Causes, Political Consequences’ by Timothy J. Power, which roots the creation of a burgeoning ‘new middle class’ in the advent of presidencialismo de coalizão (coalitional presidentialism) and power-sharing government in the 1990s, saliently evaluates the current theoretical approaches used to explicate poverty-reduction in Brazil. Power astutely illustrates the contingency between economic policy and institutional development – a near-perfect contrast and complement to the preceding study.

Along with three competent essays exploring ‘Governance’ in Brazil, the section on ‘Political Representation’ includes a laudable contribution entitled ‘Elite Contestation and Mass Participation in Brazilian Legislative Elections, 1945-2014’ by F. Daniel Hidalgo and Renato Lima-de-Oliveira. Before the twenty-first century, voter intimidation and suppression blighted the electoral landscape. Until the adoption of the Australian ballot in São Paulo state and other areas in 1958 – and nationwide in 1970, whereby citizens privately cast votes on a single card of candidate names – each legislative candidate appeared on a ballot supplied by their respective political party instead of an independent commission. Consequently, political partisans could easily identify voters’ choices and employ various illegal means (i.e. bribery, intimidation) to alter the outcome. Interestingly, successful attempts by parties to disqualify ‘less educated’ and illiterate voters ‘benefitted the left, as disenfranchised voters at the time tended to vote for centrist or right-wing parties’ (247). Since the arrival of the electronic voting system in 2000, however, Brazil, which enforces a mandatory voting requirement of nearly all citizens from the ages of eighteen to seventy, now enjoys free and largely fair elections.

Despite the trials and tribulations of the past three years including the recent impeachment and removal of incumbent president Dilma Rousseff, Brazil ought not to despair. As demonstrated in this illuminating volume, the nation possesses the capacity to ‘peel the pineapple’ (descascar o abacaxi) – an expression meaning to solve a daunting problem – by rebuilding the country upon the four pillars of sound government that rescued more than thirty million citizens from destitution in the span of a single generation: transparency, the rule of law, consensus politics and prudent economic principles. If and when accomplished, the next sunrise will be the same for bustling São Paulo, the rural North-East and everywhere in-between.

And that would be better than good.